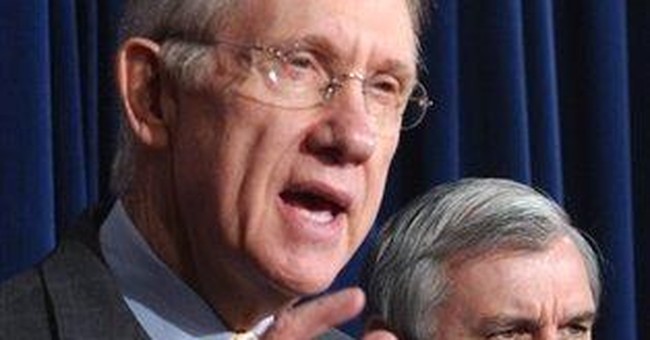 Senate Majority Leader, Harry Reid (D-NV) has declared "this war is lost" and has made a great deal of pretending to have decided when and under what circumstances US troops will effect their retreat from Iraq.

Forget, for the moment, the effect on the young men and women who are actually fighting this war that statement must have on their morale. Consider - as Democrats must surely be doing - the political effects of declaring "this war is lost."

Harry Reid now has a reason to root against Americans in (what those of us who are not, like to call) "harm's way." He now needs to have his proclamation become the commonly accepted truth. He is invested in the failure of the war in Iraq.

If the Republican apparatus were up and running with any kind of efficiency, the RNC would be demanding of every Democrat in the nation running for (or serving in) any elected office to declare whether or not they agree with Harry Reid.

The RNC would, further, make it clear to all that not denouncing Harry Reid is the same as agreeing with him.

Second, it should be made clear that, although Harry Reid was talking about the war in Iraq, we are still fighting the wider war on terror; a war which has stayed off our shores for about five-and-a-half years, but which may revisit us with no warning, at any time.

One of the things we have learned from the action in Iraq is that weakness is seen by our enemies as … weakness. Our enemies are not looking for a path to peace to co-exist with the West in a Shangri La.

Our enemies celebrate weakness and will continue to exploit it. The nuances of Harry Reid's statement might well be lost on them.

Reid's comments splash over into the Democratic nominating process. The NY Times ran a piece yesterday by Raymond Hernandez which began: Only a few months ago, the vast majority of black elected officials in New York were expected to support the presidential candidacy of Senator Hillary Rodham Clinton. But … in a series of interviews, a significant number of those officials now say they are undecided about whether to back Mrs. Clinton or Senator Barack Obama.

If Hillary Clinton (read, BILL Clinton) believes the most basic constituency in the Clinton/Clinton cross-tabs is beginning to drift away to Obama, she (read, HE) will have no choice but to find some way to back away from her current stance on the war in Iraq and circle around to get to the left of Harry Reid and Barack Obama.

Imagine the howls of outrage if, while US troops under NATO control in Kosovo, Newt Gingrich had said "this war is lost."

In the long-term, the Democrats will be hurt by what Harry Reid is saying and what other senior Democrats are not saying.

As we move through the Presidential election cycle, Democrats risk a backlash from voters who may not be happy about the state of affairs in Iraq, but will not abide putting our service members at risk for political gain.

On a the Secret Decoder Ring page today: The New York Times piece about Hillary and Obama; plus the Politico.com coverage of reactions to Reid's remarks. Also a Mullfoto which made me giggle and a Catchy Caption of the Day.