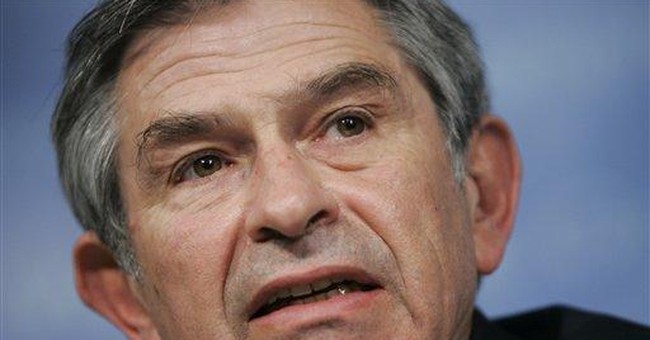 Paul Wolfowitz is the President of the World Bank.

If you are known in the popular press as a "neo-con" and; if, moreover, you sat at the right hand of former Defense Secretary Donald Rumsfeld in the run up to the war in Iraq and; if, moreover, you got your undergraduate degree in Mathematics from Cornell University (sted Yale) and your PhD in Political Science from the University of Chicago (sted Harvard) it is not likely that the Washington Post would come to your aid.

For those who have been completely consumed with who, if anyone is actually changing the diapers of Anna Nicole Smith's baby, you may have missed this latest poke in the eye of the Bush Administration.

The World Bank is, as its name implies, a multi-national organization. It is based in Washington, was formed in 1944 as a way to help the reconstruction of post World War II Europe and, according to its website is:

The current President of the World Bank, the aforementioned Paul Wolfowitz, who is in some considerable hot water over the fact that he has a Significant Other who worked for the World Bank before he got there but then got a hefty salary increase, a promotion, and a move over to the State Department - seconded from the World Bank.

As you can imagine there have been howls of outrage that Wolfowitz gave his honey a huge salary bump and a cushy job while people in Africa are starving.

No justice, no peace, baby!

Oops. It seems that Dr. Wolfowitz actually played by the rules and did whatever he did by the book. According to an editorial in the Washington Post yesterday:

Wolfowitz called the potential conflict of interest to the attention of the Bank's ethics committee which suggested the woman leave the bank; that she should be given a raise because she had already been "short-listed for promotion; then reviewed the situation six months later after receiving an anonymous complaint from a Bank employee; concluded that "on the basis of a careful review" the anonymous complaint did not raise "ethical issues appropriate for further consideration."

Oh. Hmm. That appears to cast a slightly different light on things.

Wolfowitz has demanded the World Bank pay special attention to Africa and is respected amongst African leaders for so doing. For example, according to a Reuters report, the budget minister of the Republic of Congo "said on Friday that Wolfowitz had shown sensitivity for Africa's struggle against poverty" and "This is someone whom we've worked with well. He pays attention to African problems."

The reality is: There are a lot of people in Washington - politicians, policy wonks, and journalists - who despise Wolfowitz not because of his girlfriend, but because of what ever role he might have played in developing US Iraq policy.

The fact that the Bush Administration has not been willing or able to defend either Alberto Gonzales or Paul Wolfowitz speaks volumes as to why the President's approval ratings are mired in the 30's.

The Administration's opponents are permitted to have a two or three week head start on any negative story before anyone does anything to try and counter it.

The most egregious strategic example is the Administration having permitted the Worldwide War on Terror to be reduced to a slap-down political fight over street-by-street tactics in Baghdad.

Maybe the facts as laid out in the Post editorial have been well-known and widely reported to everyone, but that would surprise me.

Wolfowitz may decide he has to leave the World Bank, but if he does, the developing world will be the worse for it.

On a the Secret Decoder Ring page today: A link to the official Wolfowitz bio from the World Bank and a link to the Washington Post editorial. A Mullfoto showing the Skippy Scooter playing nicely with motorcycles and a Catchy Caption of the Day. AND a correction from Friday's MULLINGS.