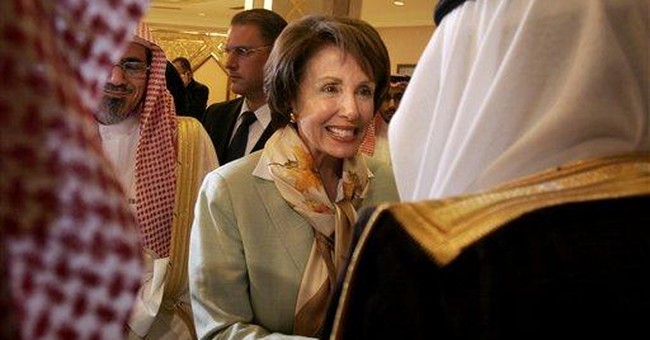 It's Spring Break. A time when boys and girls, pretending to be adults, go to places they know they shouldn't; do things they wish they hadn't; and pray they don't show up in a "Girls Gone Wild" DVD later on.

It's one thing to be a college student, drunk on Jello shots, at the beach bar in Daytona, lifting your shirt for some dope with a video camera. It is something else to be the Speaker of the House, drunk on power, making a fool of yourself by pretending to be a diplomat and going to the Syrian desert.

The Washington Post - not exactly known as a semi-official mouthpiece of the Bush administration - in a Thursday morning editorial called Speaker of the House Nancy Pelosi's visit with the president of Syria "foolish;" her statements about a diplomatic breakthrough "ludicrous;" and, her "attempt to establish a shadow presidency … counterproductive."

The Post editorial excoriated Pelosi for metaphorically sharing Jello shots with "Syrian dictator Bashar al-Assad" whom it described as "a corrupt thug."

Whoa! Check Please. Not only does the President have the sole power to do all those things, but when the Congress is involved at all it is the SENATE, not the House which has the "advise and consent" authority.

Here's everything the main body of the Constitution says about the Speaker of the House (Article I, Section 2): The House of Representatives shall choose their speaker and other officers …

So, according to the US Constitution the sole power of the Speaker of the House is - to be chosen.

Before you hit the "reply" key so you can send your "Galen, you ignoramus" email, the Constitution does not confer upon the Speaker the right of succession to the Presidency. That is done by law and can be changed at any time.

According to a variety of news agencies, Pelosi said "she brought a message to Mr. Assad from Israeli Prime Minister Ehud Olmert that Israel is ready for peace talks with Syria."

To which the Israelis responded (according to the Jerusalem Post) that, to the contrary, the Israeli PM had, "emphasized in his meeting with Pelosi on Sunday that although Israel is interested in peace with Syria, that country continues to be part of the Axis of Evil and a force that encourages terror in the entire Middle East."

Not everyone thinks Pelosi Spring Break trip was dreadful. In an on-line chat between the editors of, and reporters for, the China People's Daily, this: Pelosi … posed for pictures with President Bashar Assad and held talks with him, which enabled the Syrian government to regard itself as part of the main-stream international society.

[Syrians] have given a very positive appraisal of Pelosi's Middle East trip. Elias Murad, editor of the ruling party's of Al-Baath Newspaper, noted that Pelosi's trip has affirmed the positive role of Syria ...

Before you think me too harsh, consider how the US press would have handled this story if everything were the same except the Speaker had been named "Newt" and the President had been named "Bill."

Nancy, Nancy, Nancy. Before you take off on your next Spring Break trip, maybe you should review that famous political health class movie: "Our Changing (Legislative) Bodies."

On a the Secret Decoder Ring page today: Links, links, links to the articles referenced above; a Mullfoto from New York City, and a Catchy Caption of the Day featuring Pelosi & Assad.