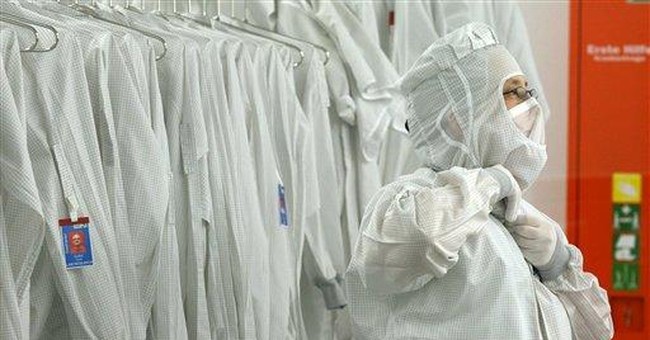 Last night I was invited to attend the Intel Science Talent Search award banquet at the Ronald Reagan building in downtown Washington, DC.

Intel is the current sponsor of this event which began before the US entered World War II - in 1941. The finalists in the Science Talent Search have gone on to win every conceivable award in science including six Nobel Prizes.

There were 40 finalists - all high school students - who had worked their way through a process which began with 1,700 entrants. One of them was a young woman named Sarah Marzen of McLean, Virginia.

Ms. Marzen's project was entitled "On the Relationship Between Solute Size and Solvation Thermodynamics."

I had seen Sarah's name and project title in the materials I was provided by Intel's Diana Daggett and I had spent a good portion of the day prior to my going over to the event trying to remember if I had ever known anything about thermodynamics.

The answer was: No.

I was drawn to Ms. Marzen because she attends the Thomas Jefferson High School for Science and Technology in Alexandria, VA. And because before that she had attended Haycock Elementary School and Longfellow Junior High in McLean, VA - both schools attended by The Lad before we hauled him down to Dallas, Texas.

I asked Sarah when she realized she had a gift for physics and math. She told me that it wasn't a moment; but that her sixth grade teacher, Mrs. Meade, encouraged her and her interest and talent grew from there.

I don't know Mrs. Meade, but if I had a gold star, she would get it.

The explanation of Sarah Marzen's project was this: She represented the placement of water around the solute as a probability distribution as opposed to a uniform distribution. These improvements suggest that hydrogen bond reordering may assist in understanding hydrophobic hydration of larger complex molecules.

Every one of the kids I talked to was poised, cheerful, articulate and … regular. Not one had the 2007 equivalent of a pocket protector.

Going through the bios of the 40 finalists, they play sports on their schools' teams. They play instruments in their schools' bands. They act in plays, they sing in choruses, they edit their schools' papers and do all the things that other kids do.

But they do things that other kids don't.

Intel is proud of what it does in this and other science and engineering competitions it sponsors for young people. Chairman Craig Barrett made the point during his remarks that the days of America leading the world by being the greatest producer of commodity products were over.

America, he said, would continue to lead the world so long as we continue to bring the intellectual power to bear on new ideas.

Notwithstanding our fascination with the death of Anna Nicole Smith and the life of Britney Spears, Barrett said, "There is still only one nation in the world which has the capacity to attract the best and the brightest in every scientific discipline - the US."

Another exec told me that Intel employees provide "a third of a million hours per year" doing good works in their community. "That's the equivalent of 1,500 full-time employees doing nothing but," he said.

I suspect there are other great American corporations which can make a similar claim; but none of them were celebrating 40 of the smartest high school science students in the country last night.

The top prize was won by Mary Masterman of Oklahoma City, but the 39 other young Americans will go off to college, then earn advanced degrees, then invent and discover marvelous things.

According to the first law of thermodynamics, the total amount of energy in the universe is constant. A good deal of it was in the Ronald Reagan building last night and all of it was positive.

On the Secret Decoder Ring page today: A short explanation of the three Laws of Thermodynamics, a history of Intel; another in the series of license plate Mullfotos; and a Catchy Caption of the top prize winner in the Intel Science Talent Search.