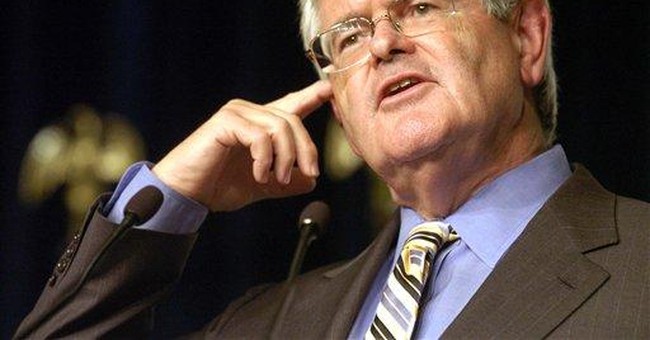 The Popular Press was tripping all over itself this past weekend with the news that Newt Gingrich had come clean on an affair he was having while he was still Speaker; that Fred Thompson said he might consider running for President; and Chuck Hagel will be making an announcement today about his Presidential intentions.

The question I was asked over and over again (including for CNN and ABC's Good Morning America) was: "Doesn't this show the GOP is unhappy with its current choices?"

And, because this was not my first time on TV I responded approximately thus:

Both parties appear to be looking for options, if not alternatives. How else do you explain Hillary Clinton at 36% - meaning 64% of Democrats are looking for someone other than her?

The reason, as I have been saying since immediately after the elections last November, is: Each side wants to win. They are looking for the candidate who matches up best against the other side's potential nominees and will make their decision based upon that.

Newt 'fessed up to his affair in an interview with James Dobson specifically to get it into public discussion now, so that if he decides to pull the trigger on a run for President after Labor Day this will be old news.

It had the desired effect of getting major news organizations to ramp up their Newt-as-candidate coverage.

Former Watergate Committee staffer; former actor; former US Senator; and current actor, Fred Thompson appeared on Fox News Sunday. When Chris Wallace asked him if he was considering running for President, Thompson said: "I'm giving some thought to it. Going to leave the door open."

Which, in this day-and-age, is the equivalent of balloons going up; confetti coming down; bands playing and signs waving.

During an interview with Claire Shipman, I was asked about the impending announcement by Senator Chuck Hagel (R-Neb). I said that in the US Senate - in the history of the US Senate - no Senator has ever waited to see what position Chuck Hagel was going to take before making up his or her mind.

Writing in the Washington Times, national reporter Ralph Hallow quoted the Nebraska GOP state chairman as saying: "He is very popular in Nebraska, and that popularity could translate into a popularity nationwide."

Yeah. Right. So, that must be the origin of the famous political aphorism: As goes Omaha, Nebraska, so goes … what, Pierre, South Dakota?

The same USAToday/Gallup poll which had Senator Clinton at 36%, had Senator Barack Obama at 22%. Former Senator John Edwards was at 9%.

Al Gore is going to win the Nobel Peace Prize which will lead to him hearing America's call for him to run for President.

I NEED Gore to run for President. I have to write three days a week. Without John Kerry in the race I need someone like Gore to provide … well, not a light touch exactly, but you know what I mean.

The Presidential field, which only a week or so ago looked like it was pretty well settled, is gaining a bunch of new entrants.

On the Secret Decoder Ring page today: Links to all the articles and to The Polling Report's page of polls on the Democratic Field. Also a very confusing Mullfoto and a Catchy Caption of the Day.