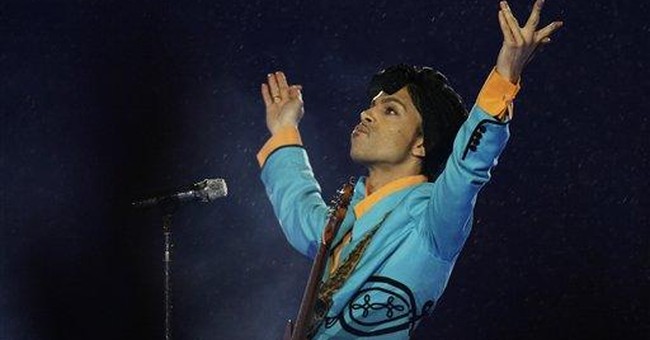 Prince? As the Superbowl halftime show? What was the NFL thinking?

Zero, would be the answer to that.

The year before Sir Paul, the halftime show featured Janet Jackson making a clean breast of things but I missed that as I was in Baghdad where halftime came on at about three in the morning and Janet could have mentioned me by name and it wouldn't have stirred me from my cot.

Prince sang one song which sounded to me like Little Richard in that Geico commercial: "Cranberries! Stuffing! OOOOOOOOHHHH!!!!"

And "Proud Mary?" Give me Tina Turner. Even if she is 67 years old.

Maybe &*$%(!@ is really hot in Borneo where the NFL wants to generate local interest.

Pending that, I would recommend that the Superbowl halftime show be a reprise of all the ads from the first half that men of a certain age missed because they needed to use the break in the action on the field to … you know.

For my money, I think it would be swell if the halftime show were split evenly between the Kingston Trio and Andy Williams.

Don't you agree that ad agencies are now trying way, WAY too hard to be THE Superbowl commercial that everyone talks about on Monday morning?

Speaking of which, I think that if a candidate for President wanted to guarantee election he (or she or &*$%(!@) would promise to make the Monday after the Superbowl a national holiday.

Enough about the halftime show. Let's get to the real stuff: The race for the Democrat(ic) nomination for President.

Here's my take as of the first of February in the off-year: We are witnessing Hillary's campaign at its zenith. Starting in Iowa last week she has been racing to the left on the Iraq situation and no one - NO one - thinks she truly believes a single thing she has said in the past two weeks.

Last week Barak Obama spoke at George Mason University, just outside Washington, DC, to perhaps 3,000 students who were organized through a Facebook deal.

Also, a week before that, Al Gore spoke in Idaho. According to one account, he was to speak at a relatively small venue which sold out in about 20 minutes. So they moved the event to Boise State University. According to Ben Goddard writing in "The Hill" newspaper, Gore "sold out a 10,000-seat auditorium faster than Bruce Springsteen's last concert there. People were actually scalping tickets in the parking lot to hear a politician talk about global warming."

If Obama is the anti-war Democrat, and Gore is the anti-warming Democrat that would appear to leave a huge lane for a national security Republican to run in.

Who does the end of the Hillary campaign help most among Republican candidates? Rudy Giuliani.

Prince. Maybe Obama should adopt "When Doves Cry" as his campaign anthem.

On the Secret Decoder Ring page today: Links to the Obama and Gore appearances and the Prince tune. Also a Mullfoto which intrigued me and an anti-French Catchy Caption of the Day.