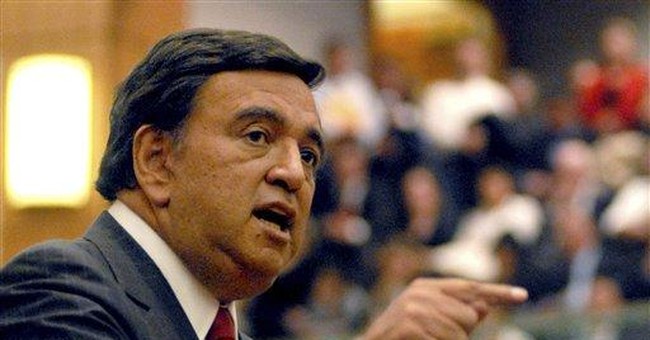 Talk about a big Presidential Election weekend: Hillary got in. NM Governor Bill Richardson got in. Kansas Senator Sam Brownback got in. Newt and Biden were on Fox News Sunday. McCain was on Meet the Press.

Sen. Chuck Hagel (R?-Neb) was on Face the Nation and C-SPAN where announced he is considering run for President as an independent.

Chuck Hagel? What kind of slogan would Chuck Hagel have: "Hagel's not a Bagel?" "Chuck's a Â" Oh. Nevermind.

The real news this weekend was Hillary's having to advance - perhaps by several months - her campaign timetable because of the extraordinary attention being generated by Barak Obama whose appearance in New Hampshire last month stopped political junkies in our tracks.

Obama is at that stage in Presidential politics which roughly equates to lighting a charcoal grill: You stack the briquettes, pour on the lighter fluid, throw in a match and Â Whoa! Smoke and fire and heat! Very exciting.

But you can't cook a steak on that. You have to wait until the fire burns down and the coals begin to glow to see if you can grill a meal.

Here's a way to test a candidate's early strength. If you have to describe who someone is, they are not in the top tier: McCain, Giuliani, and Romney are in the top tier because most people know who they are without further explanation. Brownback, Hagel, and Hunter are not.

On the Democrat side, Clinton, Obama, and Edwards are top tier. Biden, Richardson, Dodd are not.

It seems to me that 41% for Mrs. Clinton is far below what her campaign would have wanted at this stage given her huge win in her re-election campaign for Senate in New York. 17% for Obama is remarkable because only about three people have any idea what he stands for or who he is other than be is not named "Hillary."

The issue for the Clinton campaign will be how long it takes her to seal the deal with rank-and-file Democratic primary voters who love her but are frightened that she will, as one national political reporter put it "march them right off the cliff in a general election."

On the Republican side, Rudy Giuliani is at the head of the class with 34% followed by John McCain (27%); Mitt Romney and Newt Gingrich are tied for third at 9%.

Chuck "Maybe he is a Bagel" Hagel is an asterisk tying him with Duncan Hunter but behind Tommy Thompson, Mike Huckabee, Sam Brownback, Tom Tancredo, Jim Gilmore and Ron Paul (each of whom had one percent) and George Pataki (2 percent).

Having said that, remember that Howard Dean was a long-shot candidate in January of 2003 only to become the frontrunner by December of that year.

The general election results are suspect because the poll had party ID (including leaners) at 56% Democrat, 34% Republican and 7% Independents.

I was kidding about Bush getting blamed for the New Orleans Saints' loss to the Chicago Bears. It was cold and snowy at Soldier Field. Global warming notwithstanding.