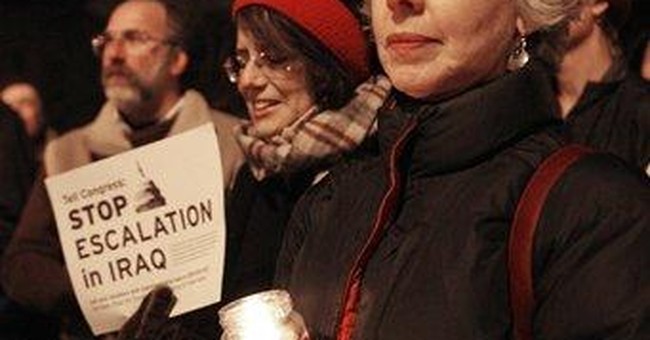 On Canadian television, yesterday, I was asked whether I thought the plan presented by President Bush would work in Iraq.

I said (and this is pretty close):

"I am not an expert in military tactics or strategy - neither, by the way, is almost anyone else who has weighed in on this. Asking me whether 20,000 additional troops is enough, is like asking me how much more power we should add to an particle accelerator."

[Laughter by the anchor]

I have been listening to people in elected office from US Senators down to who-knows-what; to people who were once in appointed office; people who were once in the military; people who have never been closer to a military unit than standing in front of the gate at a military base with their make-up on and their hair sprayed in place; reporters who evaded the draft (when there was a draft); reporters who are too young to have needed to evade the draft; and cable hosts pontificating on the status of the US military who wouldn't know an FM22-5 from the menu at McDonalds.

I am sick of all of them.

I don't know any more than anyone else whether what the plan the President proposed Wednesday night will work or not. I'm not at all certain that the President believes the plan - as it was laid out to us - will work.

We will all know soon enough. Either the violence in Baghdad will abate; or it won't. If it does, the "surge" will have been a great plan. If it doesn't, Republicans will be looking longingly, after the next elections, at their current level of 202 Members of the US House.

A New York Sun reporter called and asked me what I thought the 2008 Presidential candidates should do.

I said, if I were advising - like a Solomon the Wise - I would say that I didn't have all the information I might need to be able to look into the future. I would tell my candidate to wish the President well; pray for the safety of our troops, and hope - for the safety of all Americans - that the plan worked.

Democrats and Republicans who are children of the 60s and who are opposing the President are, I believe, misreading the mood of the public. The public isn't anti-war as it was during the Vietnam era. The public is anti- not having a good plan to win a war once we are in it.

Americans are not anti-military. They are pro-military. But anti-politician.

A couple of weeks ago I was on a flight from somewhere to somewhere else and a guy got on the plane with his wife and small son. He told the flight attendant that he had a first class seat, but wanted to sit in the back with his family.

As it happened, a young man in uniform was immediately behind him and I said, "Why don't you give this young man your first class seat, take his seat in the back, and then swap around so you can sit together?"

He did and, sure enough, a young woman in uniform came aboard and the person across the aisle from me said, "Here. Take my seat. I'll take yours in the back."

Everyone in first class - including (I know this is hard to believe) me - began gathering their things to give their seats to anyone in uniform who was traveling to or from the war zone.

As it happened there was another empty seat in first and no other military personnel came aboard; but the point remains: Just about every snotty first class traveler was willing to give up his or her seat for some young person in uniform.

That would not have happened in the 60s, because 40 years ago military personnel were urged (or ordered) not to appear in public in uniform. In America.

I don't know if the President's plan will work because I am not a military specialist. I am a political specialist and I DO know that politicians who root for America to fail are buying a ticket to retirement.