A New Congress; an Old Tradition 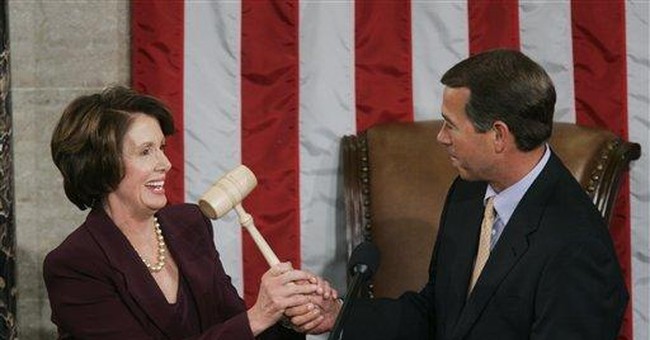 Yesterday, Republican Leader John Boehner (R-OH) handed a gavel and control of the US Congress to Nancy Pelosi (D-CA) with the words:

"It is now my privilege to present the gavel of the United States House of Representatives to our new Speaker, and the first woman Speaker in history to Nancy Pelosi of California. Madame Speaker, congratulations."

On a cold, drizzly morning in early January, 1995 Newt Gingrich was standing on the balcony outside what would become the Speaker's Office in the US Capitol looking down the National Mall toward the Washington Monument.

In a few hours he would be sworn in as Speaker of the House. The first Republican Speaker in 40 years, and only the fourth since 1931.

Newt Gingrich, politician, historian, college professor, said he had been thinking about what Ronald Reagan had said 15 years earlier: "The act of transferring power is one of the great miracles of the American system."

Another miracle of the American system, he said in a brief interview yesterday, was the notion that an "army brat from Pennsylvania" had been, that morning, preparing to take his place in American history as the Speaker of the House; a line which stretches from Frederick Muhlenberg of Pennsylvania who had been elected to that post on April 1, 1789 to - as of yesterday - Nancy Pelosi of California in 2006.

A few hours later, I was sitting with Newt in a room just off the House Floor named "The Speaker's Ceremonial Office," has he was writing the notes from which his inaugural speech would come. He was waiting for the group of his peers - Republicans and Democrats - who would come to the door of the Ceremonial Office and escort him to his place at the head of the US House of Representatives.

Democratic Leader, Dick Gephardt, in his remarks leading up to handing the gavel to Gingrich signifying the transfer of power from Democrat to Republican had said, Newt remembered yesterday: "Politics is how we sublimate civil war."

In his speech, Newt spoke kindly of Franklin Delano Roosevelt. Announcing that (then as now) the Dean of the House, John Dingell, Democrat of Michigan, would swear him in, Gingrich said:

John's father was one of the great stalwarts of the New Deal, a man who, as an FDR Democrat, created modern America. And I think that John and his father represent a tradition that we all have to recognize and respect, and recognize that the America we are now going to try to lead grew from that tradition and is part of that great heritage.

Watching from the Gallery just above the Floor of the House, I saw the Democrats squirm uncomfortably. The evil genius, Newt Gingrich, in the SECOND PARAGRAPH of his first speech as Speaker complimenting FDR?

Also in that speech, Newt recounted an incident I had forgotten about, but which I had also witnessed: A group of journalists had come to the Capitol visiting from what was still the Soviet Union.

He walked them into the House Chamber and asked who was senior. They pointed to an older gentleman whom Newt invited to sit in the Speaker's Chair. The man demurred, unsure that it was (a) legal, or even (b) safe.

Newt assured him and he ascended to the Speaker's Chair. As Newt recounted in his inaugural speech:

When he came out of the chair, he was physically trembling. He was almost in tears. He said, "I have to tell you, I did not think in my life that I would be able to sit at the center of freedom."

Speaker of the House Nancy Pelosi (D-CA) now sits at the "center of freedom."

With God's blessing, and the goodwill of her colleagues, the final words of Newt Gingrich's speech from January 4, 1995 will be fulfilled describing his vision for the US House of Representatives:

"Here America comes to work, and here we are preparing for [our] children, a better future."