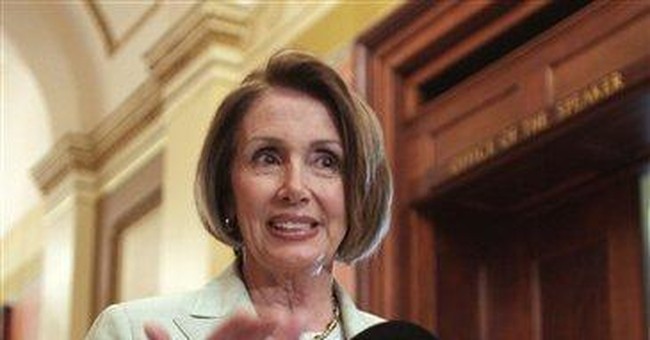 Is House Speaker Nancy Pelosi courageous or is she stupid? Is she a truth teller or is she a prevaricator? Most certainly, Pelosi deserves at least one of those descriptors. When we learn which one, it is likely Americans will add a second.

While Pelosi may be seen as many things in the eyes of supporters and opponents, her recent claims of CIA deception place her center stage. If the accusation Pelosi has made is true at the core, there was, or is, serious malfeasance at the intelligence agency. If the claim is false at the core, there is a serious character flaw that cannot be excused because Pelosi, Speaker of the House since January 2007, is third in line to the U. S. Presidency.

Like the famous double-play combination, “Tinkers to Evers to Chance,” the Democrats now have “Obama to Biden to Pelosi.” Both baseball and politics, our two pastimes, are competitive. But in the end, one is a game; the other all too real. If something were to happen to our current president and vice president, we cannot afford to accept ‘Chance’ in the line of succession.

Pelosi’s repeated accusations deserve the public spotlight. And, that is where the American people must keep the House Speaker until we know the truth about her stated claim.

Last week, Speaker Pelosi called a press conference to read a prepared statement that the CIA misled her during a September 2002 briefing to majority and minority leaders of Congress. Those viewing video replay of the press conference can see and hear Pelosi nervously fumbling with papers, in search of her prepared statement, instead of responding directly to questions from attending reporters about her accusation.

For Democrats, including the Obama administration, Pelosi fixation is a distraction. They say it’s time to move on. Perhaps, it is. Unless, of course, Pelosi is telling the truth.

If the House Speaker is telling the truth, she had better have sufficient evidence to back up the specific claim she has made that CIA briefers purposely mislead her and the Congress.

Noteworthy in all this is that Pelosi spent 10 years assigned to the U. S. Select Committee on Intelligence. That tenure is, in fact, the “longest continuous period of service in the panel's history”. During her last two years (2001-2002) Pelosi was “the top Democrat on the committee”; and is credited with having “helped lead a review of U.S. intelligence in the wake of the terrorist attacks of Sept. 11, 2001”.

Interestingly, those last two years include the time frame when Pelosi claims that the CIA misled her and, thus, the Congress. In no instance during Pelosi’s tenure on the committee did she verbalize or document her opposition to CIA interrogation techniques or the briefing content provided to her or others.

When Pelosi rival Jane Harman became the top Democrat on the Intelligence Committee, Harman did take issue with CIA interrogation techniques, and Harman documented her opposition in an early 2003 letter to CIA attorneys. There is no evidence, so far, that Pelosi ever did the same.

In fact, Pelosi admitted as much in December 2007, when she stated "It was my understanding at that time that Congresswoman Harman filed a letter in early 2003 to the CIA to protest the use of such techniques, a protest with which I concurred". (Emphasis Added) Are the American people supposed to infer from Pelosi’s statement, “a protest with which I concurred” that Pelosi reviewed Harman’s letter, approved it or agreed with it – but could not sign it? After all, would not multiple congressional signatories have strengthened the position Harman wrote about in the letter? Why didn’t Pelosi go public with it at the time?

It just may be that Speaker Pelosi’s basic intent these last few weeks was to just spin a bit in order to plug a gap in her own political history in pursuit of political ‘truth commissions’ some Democrats are pushing. But the CIA responded promptly. Leon Panetta released a letter sent to CIA professionals reaffirming that “briefing staff had delivered accurate and complete information to Congress”. That timely action by the former democrat politician boxes Pelosi.

Nancy Pelosi has placed herself at center stage. The spotlight must remain on her in search of the truth.

When that determination is clearly finalized, Nancy Pelosi will be able to leave the stage to appreciative applause, and anticipated curtain calls, having earned the admiration and good will of the American people; or, she will be dismissed amid the stilled quiet of dishonor and deserved shame.