Barack and John Go To Church 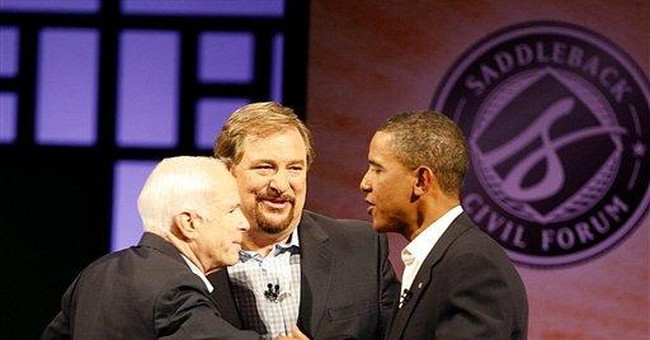 Individually, Barack Obama and John McCain sat down last Saturday night with author Rick Warren in what was called a “Civil Forum on Leadership and Compassion” at Pastor Warren’s 22,000 seat church in Lake Forest, California.

During the days preceding the event Warren said he would “be addressing pressing issues that are bridging divides in our nation, such as poverty, HIV/AIDS, climate, and human rights."

That list was a concern to many in the McCain campaign, as it appeared made to order for the very liberal first term senator en-route to Denver and the democrat party presidential nomination.

Here is some background for you about the forum and how it came to be:

Interestingly, the idea for the forum did not originate with Warren or his Saddleback Church. Rather, the idea came from the liberal social justice group, Faith in Public Life, the event’s other co-sponsor. Pressed with questions, Warren insisted that he, and the questions he planned to ask, would not be influenced by Meg Riley, Faith in Public Life board president, or the groups other board members which “include other theological liberals, among them pro-abortion Muslim and Jewish leaders”. Riley, a Unitarian Universalist minister, previously ran the denominations homosexual advocacy office.

So, it’s understandable that many thought McCain might be walking into a trap given the issue list, etc.

Despite the concerns, in general, Rick Warren was faithful to his pre-forum word, and handled his role as moderator well. In fact, we now have a case for the upcoming presidential and vice-presidential debates that, in lieu of national news anchors, we install individuals like Warren as moderators.

Obama, won the off-camera coin flip, went first, and handled himself, like the individual we have seen on the stump during the democrat party primaries and since.

McCain handled himself well; he was energetic, sharp, and to the point.

In fact, one had the sense that - for those keeping score - McCain clearly won the night.

Watching the talking heads on the post forum analysis shows, we found the liberal party spinners working overtime to put the best shine on the interaction their standard bearer had with the moderator. Media reports picked up the spin describing Obama as “offering more nuanced and analytical answers on some issues”.

That’s one way to describe Obama’s manner of answering the questions.

Another would be unlike – and often the opposite of – McCain’s manner of answering - which was consistently direct. As a result, Warren noted that the extra time meant he would be able to ask extra questions of McCain. That also tells us something as well about Obama’s answers.

Prior to the forum, the race nationally was closing to an effective dead heat. Watch the post-forum polling trends this week for reflections of voters. And, expect further tightening in the state by state contests, which are the keys to electoral victory.

If the three upcoming presidential debates go anything like the forum, independents and undecided voters will break McCain’s way.

What can Barack Obama do to improve? Here’s a recommendation: