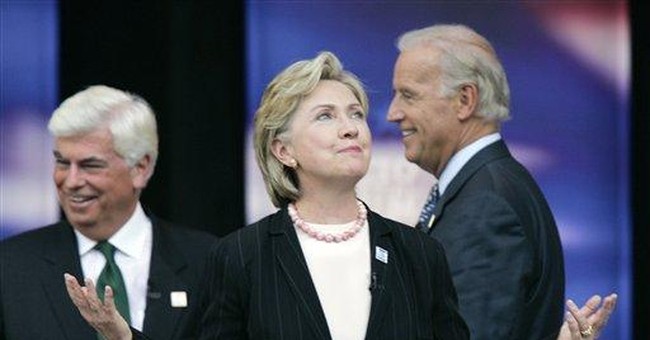 Hillary Clinton's strategy for winning the Democratic Presidential primary seems pretty clear at this point. In a time when Democrats are desperate to win the White House, and in the most favorable climate in a decade, she is promising them what they want: a candidate who can fight and win.

But at Tuesday's AFL-CIO debate Senator Clinton chose an odd way to express it:

"For 15 years, I have stood up against the right-wing machine and I've come out stronger. So if you want a winner who knows how to take them on, I'm your girl."

Your "girl?" First of all, that had to sting Senator Edwards. Hasn't his entire campaign been about being the Democrat's girl? Doesn't the candidate with the best hair win?

More seriously, this interesting phrase seems to hint at the continuing struggle Mrs. Clinton has in controlling her image. Much of the controversy that has followed her quest to become the first female president has been played out in an awkward tension. On the one hand our politically correct culture insists that a woman running for president has important social and political implications. And feminists of almost all stripes would see a Clinton victory as a step forward for women.

And yet the actual substance of much of the news coverage is not serious. Remember the silly debate about whether using her first name was actually a not so subtle sign of disrespect because nobody called her male counterparts by their first names? Leaving unsolved the question of how to refer to both the candidate and her rather politically significant husband without confusion. And the stories about her ever-changing hairstyles or the "cleavage" question haven't been particularly flattering.

This focus puts Hillary in an awkward position. Clearly she needs the support of women and the attraction of being the first female president in order to win. Yet, "vote for me because I am a woman" seems shallow and demeaning.

There is also the challenge that few people think of Hillary as particularly feminine in her demeanor or style. She isn't known for her sweetness and charm. But like it or not, charm does matter in elections. So she has attempted to soften her image and dampen her reputation as a cold calculating, and often vicious, politician.

The anger and bitterness of the far left, however, is often pulling in the other direction. They don't want charming or graceful they want confrontational and insistent. They want red meat and a candidate who won't back down. Add to this the necessity of appearing to have enough "gravitas" to be commander in chief, and it gets to be a tricky juggling act.

All of this led to Hillary's odd comment on Tuesday. The first part insisted that she is the fighter the party needs - the only candidate that can defeat the "right-wing machine." While the last phrase attempts to communicate that she isn't uptight about her femininity.

The mini-furor over this comment reveals yet another straddle for Hillary to pull off. One between older feminists who insist on eliminating any differences between men and women – "gender is a social construct" – and those younger women who view anything freely chosen as empowering for women – "You go, girl." As a result, she is seeking to be both the serious and experienced candidate running on the issues and, at the same time, just another woman trying to break through the glass ceiling constructed by the old boys club.

But we shouldn't let this debate about the Senator's gender distract us from her position on the issues. That's what the feminists keep insisting on, right? Fair enough. Senator Clinton's gender doesn't change her positions or her record. The truth is when it comes to the far left of the Democratic Party; she really is their girl.