Progressive Leads in the Polls, Liberal Falling, Edwards in Third 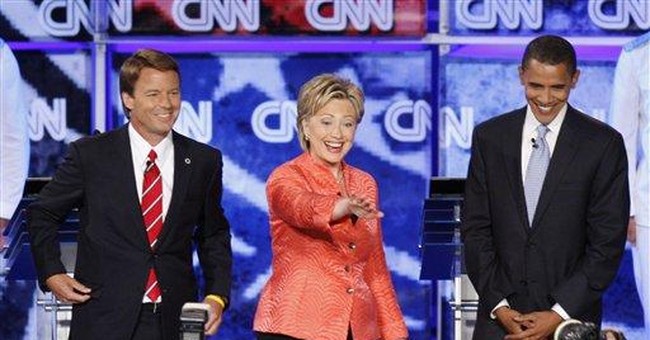 Is Hillary Clinton a "Liberal?" This has been one of the central questions of her presidential campaign so far.

Last night’s CNN/You Tube debate included an opportunity for Hillary to answer this question and the result was yet another example of the former first lady trying to have it both ways. A You Tube questioner asked point blank: How do you define liberal and would you describe yourself as one?

Senator Clinton responded that historically liberal meant you were for freedom and individual rights but that the term had been "turned on its head" in the last 30 or 40 years. She went on to claim that she considers herself "a modern progressive," someone who believes strongly in individual rights and freedoms."

What is interesting about her answer is that it is both true and deceptive. It is largely true that liberal used to mean someone who believed in individual rights and freedom. And it is true that in the late twentieth century it was successfully connected to big government and liberal social views.

What Senator Clinton fails to mention is that the reason this occurred is because it was accurate. If you were a liberal in the 60s, 70s, and 80s you were for more government involvement in peoples lives. And when liberals speak of individual freedoms they don’t mean less government, they mean the lack of choice for children’s schools; the right not to pray in school; and gay marriage.

Her preference for the term progressive is equally deceptive. The way she describes it you would think that progressive and liberal are two very different political philosophies. But this is not actually the case. Liberals adopted the term progressive because conservatives had successfully exposed the term for what it was: more government control of people’s lives. Progressive seems like a positive term. Who can be against progress?

But its historical lineage in this country is not one of individual freedom and rights but rather using government power to cure perceived social ills. Prohibition was a progressive cause. At the heart of progressivism is not a belief in individualism but in a religious fervor to reduce suffering combined with a belief in the power of government to change society.

Hillary’s claim that she is proud to call herself a modern progressive is enlightening and accurate, however, because she – a devout Methodist - brings the same religious fervor and the same faith in government to her campaign. The problem is that she knows a sizable portion of the electorate is cynical about the ability of government to accomplish these tasks and leery of the higher taxes that always follow such programs.

So Hillary throws out the old bait and switch. She gives the impression that she isn’t one of those old fashioned tax and spend liberals so effectively demonized in the past. No, she is a "modern progressive." There is only one problem: in practical terms they are the same thing.