The Suffering of "Secret Believers" 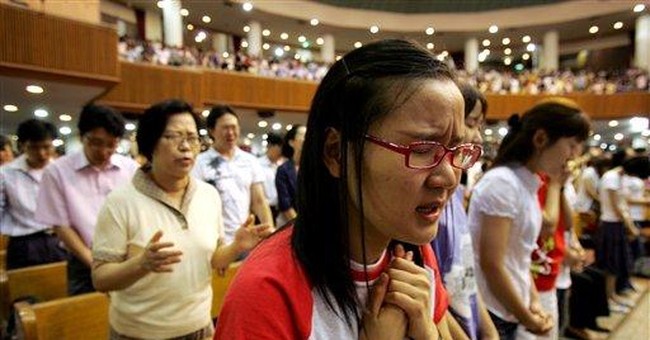 For many people around the world, religious freedom is an alien concept. No “First Amendment” protects them. No tradition of religious liberty permits them to worship according to their own consciences. If they go to a church that isn’t the “accepted” church, they risk ostracism, assault, torture, jail … even death.

The fact is, Christians are persecuted around the world on a daily basis -- it’s just that their stories are largely unknown.

But we must know their stories so that we can pray for them and support efforts to help.

Compass Direct is a Christian news service that maintains a network of international sources and reports on horrors you can’t imagine. The brave journalists at Compass do their best to uncover the truth so that some action can be taken against the tormentors. I’ve met with several of their reporters from around the world who risk their own safety and lives to shine the light on the ugly truth of religious persecution. They are trained journalists who write under aliases in order to keep from being arrested, or worse. Their reports are read by those in the highest levels on Capitol Hill, in the State Department and other government offices.

When I met with them, I felt humbled by their courage and inspired by their commitment to Christians they will never know. I marveled at the depth of their own faith. Sitting in a room with these warriors for truth made me reflect on my own commitment (or lack thereof) to my brothers and sisters in Christ. Reading the disturbing Compass reports has moved my spirit and deepened my understanding – and made me question my own willingness to “risk it all.”

In India, for example, numerous Christians have been beaten and threatened by Hindu extremists. One was tied to a tree and tormented for three hours before being banished from his village. What did he do to merit this treatment? He was handing out Christian tracts. Forcible “conversions” to Hinduism or other religions occur in some places. Other stories report on beatings intended to warn believers to stop attending prayer meetings. In another village, Christian families were banned from all shops and wells.

All of these instances occurred within the last two months, while we’ve wrapped up relaxing summer vacations and shopped for “back to school” clothes. In the business of your life, did you miss the story about Beijing house church leader Cai Zhuohua? Chinese officials recently released him from prison, where he had languished since 2004 for “illegal business practices” -- i.e., distributing Christian literature. His punishment included a firm warning that he must never engage in the activity again.

Thank the Lord there also are other ministries that help the afflicted. Once such group is Open Doors, which tracks persecution and lends a helping hand to embattled believers. Compass recently reported on a horrible incident in Eritrea, a small country along the east coast of Africa:

“Eritrean authorities tortured a woman to death on Wednesday (September 5) for refusing to recant her Christian faith, the fourth such killing in less than a year, according to a Christian support organization. Open Doors said in a statement that it had confirmed the death of 33-year-old Nigisti Haile at the Wi’a Military Training Center; she was one of 10 single Christian women arrested at a church gathering in Keren who have spent 18 months under severe pressure.”

Nigisti Haile was not the first such victim. According to Compass, other Christians in Eritrea have died after suffering torture, including two who had dared to hold a religious service in a private home. What a contrast to our experience here in the United States -- where, praise God, we think nothing of walking into any church we please. (Sometimes, we think so much “nothing” about it that we don’t even go. After all, there’s always next Sunday.)

In Turkey, police recently arrested a man who set a fire at the entrance to a Protestant church in Izmit and repeatedly fired a gun. The incident was caught on a security camera installed several months earlier -- after three Christians had been stabbed to death. “In the last year, there have been scores of threats or attacks on congregations and church buildings,” according to a report compiled by the country’s Protestant churches.

For those who want to know more about how religious persecution affects real people in our time, I recommend the book “Secret Believers: What Happens When Muslims Believe in Christ.” Written by Brother Andrew and Al Janssen of Open Doors, it’s a compelling look at some Muslims who were drawn to Christ -- despite the danger, in their land, of professing any religion other than Islam.

You’ll meet a father whose son has been arrested and is being tortured for holding “illegal religious meetings.” Two government officials visit the father and question him. One says: “It must hurt you terribly to be the father of an apostate. I have a son, just two years old. If my son turned away from Islam, I don’t know what I’d do.” The other official says, “I’d kill him,” to which the first official replies, “Yes. That is all you really can do with an apostate. If he won’t return to Islam, kill him.”

If these chilling tales outrage you as much as they do me, resolve to do something about it. Educate yourself through groups such as Compass and Open Doors. Make sure that others know what’s going on, too, and do whatever you can to raise awareness and to make a difference, however small.

And, of course, don’t forget to pray -- first and foremost for the relief of those persecuted for their faith. Then consider adding a prayer of thanks for the blessing of living in a nation where you can worship freely.