A Witness to Newfound Liberty 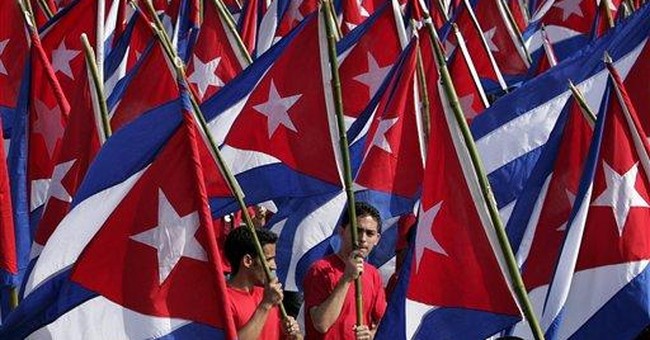 Shortly after 27 Cuban refugees set foot on a Florida beach in the wee hours of Saturday, July 14, Providence saw fit that I was among the first Americans to welcome them.

Along with a dozen or so homeowners and vacationers on Little Gasparilla Island, my teenagers and I witnessed the faces of men, women and children who had their first taste of freedom. They arrived on the quiet, sandy shores just before sunrise and instantly went from great peril to free people.

The U.S. “wet foot, dry foot” policy grants asylum only to those Cubans who actually set foot on our shore, rather than to all who make it to open or U.S. waters. The inane plan was adopted by the Clinton administration, a policy that includes charging the United States Coast Guard with preventing the freedom-seekers from ever reaching dry land. Clinton allowed himself to be, in effect, blackmailed by Castro who had begun loading criminals and the mentally ill onto boats and shipping them to the United States. Castro threatened Clinton with a massive immigration crisis and succeeded in perverting America’s long-standing policy of providing protection to escapees of communism.

Understanding the political suicide of outright reversing the practice of helping those who flee, Clinton shrewdly decided to slice the baby in a political move that no president or Congress has been brave enough to challenge and change. And decent, patriotic Americans in uniform who enlist to protect liberty and serve our nation are assigned the task of returning the desperate to their captors.

Very few make it all the way -- the courageous men, women and children I met are among the blessed few who have. Somehow, they avoided detection by the brutal communist officials who scour the Cuban waters for escapees, braved and survived the unpredictable open seas, slipped by the U.S. Coast Guard and overcame so many other odds stacked against them. Yet the event went largely unnoticed by the U.S. media.

The Cubans’ arrival just happened to be on the eve of the 49th Observance of Captive Nations Week. Of course, they knew not the significance of the date of their flight. Since 1959 -- the same year Fidel Castro seized control of the small Caribbean island just 90 miles from our country -- the third week of July has been designated by Congress to remember and show solidarity with those oppressed by communism “until such a time as freedom and independence shall have been achieved for all the captive nations of the world.” What happened to that vision?

Of course, there are those who commit their lives to spreading the cause of freedom, like my colleague at The Heritage Foundation, Dr. Lee Edwards, who is one of the forces behind the Victims of Communism Memorial, which was dedicated just this year. Dr. Edwards works tirelessly to support political dissidents in captive nations and to tell the terrible stories of those who have suffered under communist rule. And then there’s Frank Calzon, executive director of the Center for a Free Cuba, a nonprofit human rights organization that seeks to promote civil rights in Cuba. Calzon knows first-hand the suffering and heartbreak of families torn apart by communism. A native of free Cuba, Castro took control when Calzon was 15. At the tender age of 16, his parents arranged to have him flown out of the country. Mr. Calzon’s voice is rich and passionate as he reflects on the cruelty of the “wet foot, dry foot” policy: “Imagine the insanity if the police in West Berlin had been forced to capture those fleeing over the wall and return them to the Soviets. What we are doing to the Cubans today is just as horrible.”

Little Gasparilla is a bridgeless island just off the coast of Florida. When the Cubans made landfall, they asked islanders to call the authorities. As the Cubans waited to be boated to the mainland for processing, word of their arrival spread quickly through the island. Locals eagerly gave food, water, clothes and a warm welcome to the foreign strangers. The spirit of Americans, it seems, naturally reaches out to those who seek liberty. How horrible that the official policy of our nation does not.

The Cuban’s plight is not a new concern for me. I went to high school with a close-knit Cuban-American contingency whose parents had fled when Castro took power. My classmates and their families were among the most patriotic, freedom-loving people I have ever known. They treasured their liberty, and their hearts broke for those left behind. They still do. Never in my wildest dreams would I have imagined that I would have the privilege of welcoming some of their countrymen to America. Never in their wildest imaginations would they have believed that nearly 50 years after the bloody dictator seized their nation, he would still be in control.

As I scanned the faces of the newly free Cubans before me, I thought of my high school friends and their parents. The Cubans on the beach were the offspring and grandchildren of those who had not fled so many years ago. Their lives have been so different from my classmates -- for whatever reason, their parents did not or could not make the break. But those before me did, and now their children will be free. My mind raced back to those who remain in Cuba. How many generations have to suffer? How long does a proud nation so close to our border have to be oppressed?

Despite what Michael Moore and revisionists tell you, Cubans suffer daily at the hands of their evil government. According to the U.S. State Department’s report on human rights practices in 2006, thousands of Cubans serve sentences in dungy prisons absent any criminal activity; beatings of prisoners is inflicted with impunity; government-recruited mobs terrorize political opponents; there is no free speech or free press, no right of peaceful assembly and association; there are frequent and arbitrary arrests of human rights advocates. The list goes on and on.

On a personal level, I am still trying to process what my experience on the island means for my life, and how I am to use the many blessings I enjoy every day to help others whose souls yearn for freedom.

In one moment I went from packing up after a weeklong dreamy island vacation, to standing in the midst of a life-changing experience. I had the privilege of filing the first detailed press story of the refugees’ successful arrival that bright, sunny morning. I’ll always remember their beaming faces and dazzling eyes – they sparkled not from the sun, but from the sheer exhilaration of breathing freedom for the first time. I became immersed in the joy of their discovery.

In addition to the memories and photographs from that day, I have a Cuban souvenir that I plan to frame and put on my desk. One jubilant man who appeared to be in his 20s pulled Cuban bills from his pocket and began distributing them to the islanders as officials called him to the waiting boats. Misunderstanding the money as some attempted payment for the hospitality, at first I refused. “The Cuban money is no good here in the United States. He wants you to have the bill -- he says it is for good luck,” someone explained. I hugged my new friend and accepted his token of goodwill, marveling at how quickly humanitarian bonds can form when joy is shared.

My prayers are with my new friends and their families -- and especially for those who remain captive.