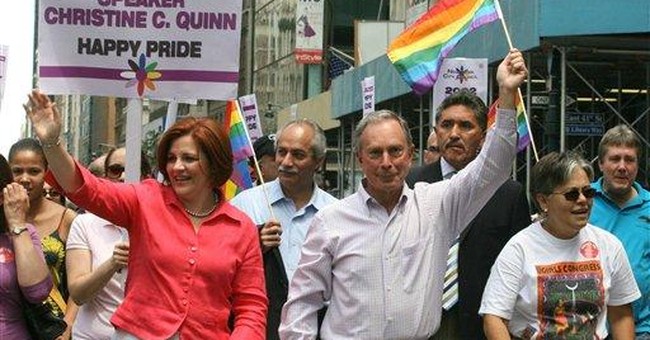 Quick question: Who thinks there isn’t enough frank sexual information forced on today’s kids? Is the bar for acceptable sexual behavior still too high? You would think so when reading a recent Washington Post article titled “A More Candid Approach to Sex-Ed.”

As many parents know, most sex-ed classes are already candid enough, thank you very much. The last thing we need is for anyone to spice them up or further complicate what should be a pretty simple subject. But that’s what schools in Montgomery County, Maryland plan to do by introducing lessons on homosexuality to 8th and 10th graders -- lessons that serve to further the radical homosexual activist agenda.

Those in 8th grade, for example, may be asked to ponder their “gender identity.” Is this the same thing as your actual gender, which should be, ummm, obvious by this time? No. Students are told that it’s “your identification of yourself as a man or a woman, based on the gender you feel to be inside.” You could be a boy trapped in a girl’s body, or vice versa. Or something in between, it seems. Since when did knowing one’s gender get so … difficult? My goodness, isn’t there enough out there to confuse our children without asking them to question whether they are really a boy or truly a girl? Have we gone mad?

Whatever your true identity, though, you can bet it is “innate,” the 8th graders are told. To be certain they understand, the curriculum defines “innate” as “determined by factors present in an individual from birth.” In short, gays are born, not made, so “straights” can’t say homosexuality or bisexuality is wrong. (Does that apply to those who prefer bestiality or pedophilia? Just wondering …) What’s needed, then, is “tolerance,” which the curriculum says is “the ability to accept others’ differences and allow them to be who they are without expressing disapproval.” Does the same logic apply to other abnormal or harmful behaviors? Do we say, “Oh, so you’re an alcoholic -- good for you!” Or, “Tendencies toward kleptomania? Well, don’t let me stand in your way!”? I think not.

Students in 10th grade, meanwhile, read “coming out” stories from homosexuals, a bi-sexual and one “transgendered” individual. “Esperanza,” for example, tells them:

“I’ve known for a long time that I am a lesbian. When I was a little girl, my grandfather would read me a bedtime story before I went to sleep. Sometimes, he would read fairy tales about a beautiful princess and a charming prince who fell in love, got married and lived happily ever after. When he read those stories, I knew that when I grew up, I would marry the beautiful princess, not the prince. I didn’t begin to realize until I was much older that these kinds of feelings made me different from the other girls at school.”

The curriculum contains a nod to abstinence, which it correctly notes, is “the only 100 percent effective way to prevent unwanted pregnancy and sexually transmitted infections.” But this is one sentence tucked into an explicit “Condom Use Demonstration Lesson.” That’s right -- a condom demonstration. Bet no one is sleeping through that class! But I do wonder what’s going on the minds of the girls and boys as they are forced to sit through such humiliating and degrading conversations and “instruction.” Do they think that adults expect them to behave like animals? Do their young, impressionable souls feel crushed at how little character we think they have? As I point out in my book, Home Invasion, and in my speeches nationwide, the underlying message our young people are getting is this: We adults believe you have no morals, no self-control, no courage, no conscience.

We are teaching our children a lie -- a lie that robs them of the joys of childhood and their best futures. Why shouldn’t we expect the very best from them? And why are we afraid to teach them the truth? We would never tell our little boys and girls to engage in “safe drug use” or to “smoke responsibly.” We don’t hesitate to put our foot down in other areas of life. So why should it be different when it comes to setting standards for sexual behavior?

Besides, exposing kids to graphic sex-ed is just plain stupid. As the mother of two teenage boys, I’m amazed at the naivetè of those who believe that young men have the ability to listen to detailed discussions of condom usage and sexual activities in one class and then concentrate on such exciting topics as, say, algebra and chemistry in the next.

Just as significant is what the Montgomery County sex curriculum doesn’t say. There’s no emphasis on the serious health risks associated with homosexual behavior. And, as the grassroots group Citizens for a Responsible Curriculum (CRC) notes, “Nowhere is abstinence or sex placed within the context of marriage. The word marriage is not mentioned in the 8th or the 10th grade lessons.” Not surprising, really: According to CRC, the 10th grade resource was developed by a homosexual advocacy group named Project 10, which is “dedicated to providing educational support services to gay, lesbian, bisexual, transgender and questioning youth who attend public school campuses.”

Not every school community is as bad as Montgomery County. But some are, and others fall somewhere in between. Do you know what your schools teach? If not, I encourage you to stop by and check out the sex ed curriculum over the summer. If it’s offensive to core values and decency, if it degrades your sons and daughters, do what the brave folks at CRC did and make your voice heard.

As a parent, you have the right and responsibility to ensure that your children aren’t being bombarded or brainwashed by radical activists. The good folks at CRC can give you guidance on how to organize. Learn from others -- you’re not alone.