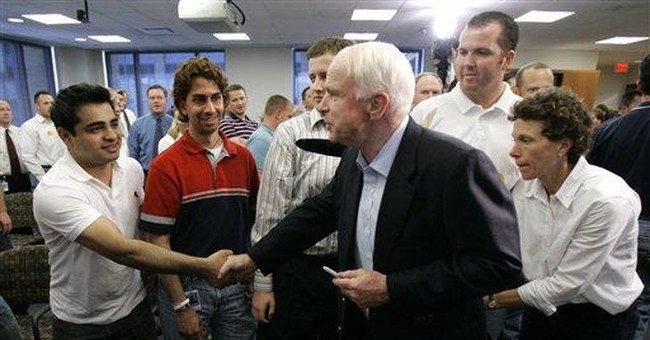 Nobody ever said that being a parent is easy. But do politicians have to make it harder?

Here I’ve been all these years, teaching my three children that you can’t get something for nothing. If you want something, you have to work for it. Now along comes the Senate to debate an immigration bill that would undermine that very principle.

It’s a simple question of mathematics. The Heritage Foundation’s Robert Rector -- probably the most widely quoted expert in the country on immigration -- has crunched the numbers and figured out that the average illegal immigrant family receives about $30,000 annually in government benefits. But that same family pays only $9,000 in taxes.

You don’t need a calculator to see that leaves a short fall of $21,000. As Rector puts it, that’s like having the taxpayers buy every illegal immigrant family a brand-new Mustang convertible every year!

And by taxpayers, of course, I mean you and me. And your neighbors. And your friends. I’m talking about everybody who clings to the notion of fair play and hard work -- who thinks the American Dream is something you strive to earn, not something you passively accept, as if it were a government handout.

Supporters of the Senate bill may want to deride their opponents as xenophobes who hate immigration, but that’s a ludicrous caricature. In reality, they are people who are glad to accept immigrants who come here legally and become American citizens. But they also don’t want their children taught that lawbreakers get a slap on the wrist and win the jackpot prize to live on the government dole.

The bill’s proponents are persistent, though. The status quo is unacceptable, they say, so let’s pass this bill and go from there.

They’re right about the status quo. But for a viable solution, I’d suggest looking to former Attorney General Edwin Meese III, who has published a paper laying out the essential principles of any sensible immigration reform. Mr. Meese was there in 1986when the last amnesty bill passed Congress, so he knows this battle first-handand the many pitfalls of offering amnesty to the masses of people who have broken our laws.

He outlines six principles for reform:

1. 's immigration system must be a national strength and not a strategic vulnerability.

“From a national security per­spective,preventing illegal entry and reducing unlawful presence in the is an imperative. An uncontrolled immigration system encourages the circumvention of immigration laws and is a clear invitation to those who wishto take advantage of our openness to cause this nation harm.”

2. The rule of law requires the fair, firm and consistent enforcement of the law, and immigration is no exception.

3. Those who enter, remain in, and work in the country illegally are in ongoing and extensive violation our immigration laws.

“Forgiving or condoning such violations by grant­ing amnesty increases the likelihood of further ille­gal conduct. Failure to enforce immigration laws is deeply unfair to the millions who obey the law and abide by the administrative requirements to enter the country legally.”

4. Each nation has the responsibility -- and obligation-- to determine its own conditions for immigration, naturalization and citizenship.

“The welcomes those who come here in accord with the law. Individuals who are not citizens do not have a right to American citizenship without the consent of the American people as expressed through the laws of the .”

5. Immigration policy should be a fiscal and economic benefit not only for immigrants, but also for the nation as a whole.

“Most individuals and families that immigrate to the come seeking economic opportu­nity.Unlike previous generations, however, a gener­ous welfare, education and heal ths ystem with generous eligibility draws poor and low-skill immi­grants into the ranks of the underclass rather than encouraging self-reliance and financial indepen­dence. Policymakers must ensure that the interac­tion of social services and immigration policy does not expand the welfare state and impose significant costs on American society.”

6. A temporary worker program must be temporary,market-oriented and feasible.

“A balanced and well-constructed temporary worker program should diminish the incentives for illegal immigration by providing an additional option for legal temporary labor and, in combina­tion with other reforms, reduce over time the cur­rent population of illegal aliens.”