The Way the World (Really) Works: The Wild Deuce Trumps 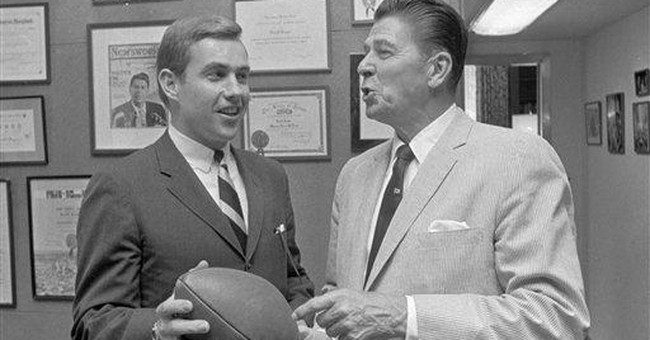 A long time ago in a galaxy far, far away, America – and the world around it - was rapidly descending into Economic Hell. It was a protracted, confused, process called “the ‘70s.” A number of problems were causing recession, unemployment, and suffering, quantified by “the Misery Index” at twice the depth as today’s. America also was enmeshed in a Cold, yet latently nuclear, War. This held a very real risk of world annihilation.

Two men filled with moral courage, both “deuces,” gave us an era of peace and prosperity. They were deuces, low face value cards in the deck, not jokers, and designated themselves wild. The wild deuce trumps. These two extraordinary men transformed the world.

One of these, a backbencher in the House of Representatives, turned the world economy from misery to affluence. His name was Jack Kemp, a Representative from Buffalo, New York, and former football quarterback. He chaired no committee. He was not part of House leadership. He did not have SuperPAC donors behind him or the support of aMoveOn.org-scale entity.

Kemp had a strong intellectual curiosity, one blessedly exempt (he was a physical education major) from having been deformed by the nonsensical economic dogmas then prevailing. He had the humility required to learn from outsiders to the jejune consensus — the pre-Nobel Robert Mundell, Art Laffer, and the odd but brilliant Jude Wanniski. The minds he sought out gave him his Big Idea: lower tax rates and solid monetary policy (which he ultimately concluded meant the classical gold standard).

Kemp was a man of deep feeling. There was nothing tepid about him. He possessed genuine empathy for others, including the millions of American rank and file workers. Kemp, who founded and served five times as president of the AFL Players Association, was all in for the working man and woman, and, like this columnist, pro-Union. He also, by word and deed, was in deep sympathy and solidarity with the most economically and socially marginalized, very much including African-Americans. During the late autumn of his career the only way to draw him out of retirement and into action was to propose something to bring prosperity to the Black community.

Kemp also possessed the strong sense of self-confidence befitting an All Star quarterback. He was willing to endure years of elite establishment jeers and mockery to push back against the collective insanity. He had the tenacity to tackle magnificos with big titles, big degrees, and big microphones and to demand reversal of the then prevailing (and, now, sneakily returning) savage, if universally acclaimed, policy of high tax rates and louche money.

The whole Wizard of Oz package.

For the fourth asset, equally essential, Kemp made use of his official status of Congressman and access to one of the greatest amplifiers ever invented, the United States House of Representatives. Though many have forgotten, history records how this one man, with one great idea, and the heart and courage to take a stand, used his position to force Washington to build a “road from serfdom.” Kemp put the entire world on a growth trajectory taking well over a billion people out of penury and into prosperity. We learn from Jack Kemp: the wild deuce trumps.

While Kemp was extraordinary, he was not unique. It was a lone Congressman, Rep. Charlie Wilson, who was the single most important factor in bringing an end to a totalitarian, brutal, USSR. Wilson was another backbencher without committee chair or membership in the House leadership. It happened, as meticulously documented by 60 Minutes’s George Crile in Charlie Wilson’s War (a book far more fascinating than the movie), this way. Crile:

“Years later, as he tried to explain how it all happened, how the CIA ended up with a billion dollars a year to kill Russian soldiers in Afghanistan, [CIA agent Gust] Avrakatos would offer a curious explanation. ‘It began with a Texas woman, one of Wilson’s contributors. She’s the one who got him interested.’ Joanne Herring was a glamorous and exotic figure out of the oil-rich world of Texas in the 1970s and 1980s. At the time nobody imagined that, in addition to her role as a social lioness and hostess to the powerful, she was simultaneously responsible for setting in motion a process that would profoundly impact the outcome of the Afghan war. When almost everyone had written off the Afghans as a lost cause, she saw potential for greatness in the most unlikely characters. In the pivotal first years of the jihad, she became both matchmaker and muse to Pakistan’s Muslim fundamentalist military dictator, Zia ul-Haw, as well as to the scandal-prone Charlie Wilson.”

With the aid of Herring, herself a wild deuce trump, and with his own savvy, Wilson called in political chits that he had developed over many years, used the power of his office on federal agencies not even under his jurisdiction, took the prestige of his office to foreign capitals to conduct private persuasion sessions, and used his and Herring’s tactical political brilliance to foment a series of actions. These actions directly led to the toppling of the first domino in the Soviet empire, Afghanistan. This in turn led, directly and inexorably, to the rollback of the Soviet expansion in the southern latitudes, to the liberation of the captive nations in its hegemony euphemistically called satellites, and, finally, to the dissolution of the USSR itself. This, from “Good-Time” Charlie Wilson. We learn from Charlie Wilson: the wild deuce trumps.

The stories of Jack Kemp and Charlie Wilson, using their brains, their heart, and their courage in the magnificent venue that is the “People’s House,” provides a broad clue as to what is a near certainty to happen next. “The wild deuce trumps” is the American axiom, not an anomaly. Liberty comes not out of institutions, like government, which inherently are agents of status quo-enforcing restrictions. Liberty, prosperity, justice come from the hand of a wild deuce man or woman. The House of Representatives is the big deck in which lurk many wild cards awaiting the right moment to be dealt. The presidency is banal. They don’t teach this in civics but … the House — a big deck with a lot of wild cards and a big amplifier — is the genius of the American way.

We drive toward something histrionically being called “The Fiscal Cliff.” Its sobriquet is designed to dramatize the symptoms and ignore the underlying systemic problem — economic stagnation. There is a solution to the systemic problem. The problem and its solutions are being ignored. As my co-columnist (and editor) John Tamny trenchantly wrote, ”We’ll Never Reach the Fiscal Cliff, And It Wouldn’t Matter if We Did.” Belle lettrist James Grant on CNBC calls the Fiscal Cliff “another Y2K moment.”

The Fiscal Cliff debate really is “a tale told by an idiot, full of sound and fury, signifying nothing.” It is being undertaken without reference to cause — stagnation — or cure, growth. Yet there is a solution, and it may be on its way. The cause? At 2% growth, no resolution to the deficit (or entitlements) problem is possible. The solution? At 3% the problems begin to be tractable. At 4% the problems begin to resolve. At 5% the problems rapidly dissolve.

Even the sober and conservative Prof. John Taylor noted, at a gathering of the Prosperity Caucus in Washington, DC, that 5% growth was possible … if we implement a smart rule-based monetary policy. For the hardened skeptics and, well, prosperity deniers, out there who consider 5% a hallucinogenic proposition … consider economic policy wizard Peter Ferrara’s observation about economic growth under Reagan, in Reaganomics vs. Obamanomics: Facts and Figures:

“During this seven-year recovery, the economy grew by almost one-third, the equivalent of adding the entire economy of West Germany, the third-largest in the world at the time, to the U.S. economy. In 1984 alone real economic growth boomed by 6.8%, the highest in 50 years. Nearly 20 million new jobs were created during the recovery, increasing U.S. civilian employment by almost 20%. Unemployment fell to 5.3% by 1989.”

Economic stagnation causes the tax base to wither. That causes deficits. Period. Equitable prosperity is the solution — to working people’s distress and “Fiscal Cliffs.” Monetary reform is the best candidate for this. To expect the solution to come from the White House or House leadership or the Senate is ahistorical and naïve.

The solution will emerge from some Representative of whom you’ve probably never heard … who will go on to fame. He or she will trump the elites and return the world to peace and prosperity. Deuces wild is what makes America great and transforms the world. The wild deuce trumps.