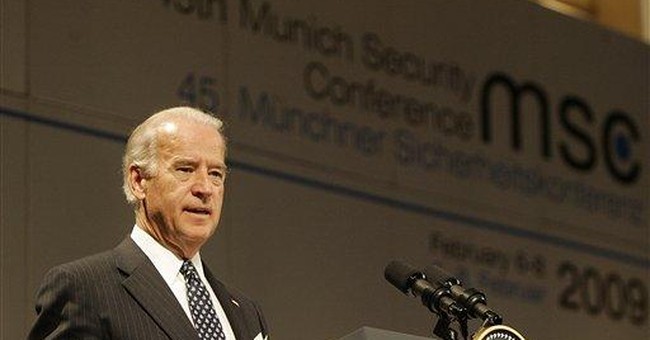 Where is Vice-President Joe Biden? In the Obama administration, he’s a political quadriplegic sending signals from underneath the HopenChange Party Bus. It’s a sort of morse code, and last week he managed to get out: “3-0-%-S-C-R-E-W-E-D”.

Here’s the context of Biden’s remarks: “Not since World War II has a caucus gathered with so many challenges facing our country and the stakes so high. If we do everything right … there’s still a 30 percent chance we’re going to get it wrong.”

When President Obama was asked what Biden meant, he said he wasn’t sure: “You know, I don’t remember exactly what Joe was referring to. Not surprisingly.”

Best I can tell, Biden gets a gut feeling which makes its way to his brain, but usually ends up on the exit ramp to his mouth instead.

So far be it for me to guess exactly what was going on in Vice-President Biden’s head when he made this remark, or how much of his comment was directed at the economic crisis currently being exacerbated by endless meddling - like when you pluck your eyebrows and it comes out uneven, so you just keep plucking and evening them out until you have nothing left. That’s the US treasury.

But you’ve got to figure that the economy must have been foremost in Biden’s mind when he said these things, right?

While he may not have been thinking exclusively about this enormous Democratic party spending spree, he may as well have been speaking only of it: ACORN gets a whopping $4 billion. Unemployable feminists get $300 million to fight violence against women (I thought the police did that). Artists get $50 million to make “art” that wouldn’t need grants if it was marketable. $90 million to “educate” the dummies who don’t yet realize that starting in 2010, their rabbit-ear TVs won’t work with the digital conversion. $4.2 billion for liberals to “stabilize” neighborhoods – meaning they get turned into make-work projects that never end up improving, lest people lose their “stabilization” jobs.

Again, while Biden perhaps wasn’t addressing the economy specifically, to say there’s a 30% chance this $800 billion dollar package may not do anything for the economy sounds about right. He could have made that 100% - because, according to the Washington Post, the Obama administration is already pondering another $1.5 trillion cash withdrawal from the people’s account at the Bank Of Hopenchange, suggesting they don’t have a whole lot of faith, and putting them in agreement with economists who told Bloomberg News that it won’t stop the economic slide.

Those of us who prefer their reality served straight-up, unshaken and unstirred, appreciate that rare politician’s ability to communicate without creating a rhetorical mudbath around himself filled with talking points. In Biden’s case, it may be intentional, or it may simply be a special gift. Or maybe I’m just projecting, because I’m so desperate right now for a politician in Washington like this – and am willing to accept Joe Biden as “Mr. Right For Right Now”.

Obama needed Biden on his ticket because it conveyed the message that there would at least be an adult present: someone to accompany junior on the political roller-coaster so he meets “you must be this experienced to ride” requirements. But now that he’s through the entrance gate, Obama has ditched his adult supervision. So now Biden is just the annoying crazy guy yelling at the coaster as it hurtles towards the big plunge.

During the campaign Biden nearly derailed the Hopenchange Party Bus in the final stretch of the campaign when he said that a newly-minted Obama is likely to be tested by an international crisis in short order. He has been. Except that he doesn’t seem to know it.

Obama sent Biden to a security conference with world leaders in Germany last week. Biden said the Obama administration wants to “press the reset button” with Russia, even as they help Iran complete their nuclear bomb, er, “energy” project. He said there would be “meaningful incentives” for Iran if they abandoned their terrorism sponsorship and bomb making projects – which is like offering a Hershey’s Kiss to Willy Wonka in exchange for the deed to his chocolate factory.

What was accomplished at the Munich meeting? Largely nothing. Which is what happens when Biden is properly choke-chained to his script. I prefer the “freestyle” Biden who, when asked two years ago what he thought of Obama, responded: “"I mean, you got the first mainstream African-American who is articulate and bright and clean and a nice-looking guy. I mean, that's a storybook, man."

Cut to a news storm trying to determine the context of his remarks and what exactly Biden meant by them.

Biden is going to the Special Olympics soon – heading up a delegation, not competing himself. But he is the Rain Man of political spin. Rather than follow his party’s talking points, he absorbs all the toxicity and regurgitates it in the form of a mysterious yet insightful little nugget. It’s quite the gift.