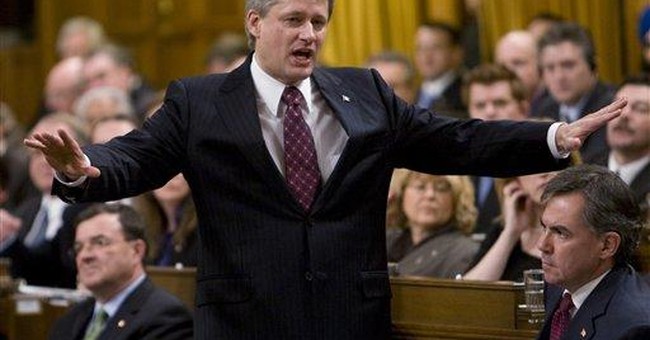 Only a couple of weeks ago, Canada’s Conservative government was headed for defeat because of its steadfast opposition to rewarding epic failures with cash prizes -- more commonly known as “bailouts”. Canadian Prime Minister Stephen Harper adjourned parliament a couple of weeks ago to preempt a political coup by opposition Liberals and their separatist and socialist comrades. They were upset that Harper slammed the treasury’s till shut on their little fingers. He was rewarded with 45% support from the Canadian public in a multi-party system -- nearly a full 10% more than he had in October’s federal election, and 5% more than he would need to form a majority government if an election was held today.

Then Harper blinked. Knowing that he will have to return to parliament and resume this drama when his budget is tabled at the end of January, his party is now showing signs of insecurity and talking bailouts, starting with a possible $3 billion for the Big Three American auto companies. Dad (America) has been a bit too slow on the draw with cash for smokes and booze, so the kids are hitting up mom (Canada), who sees this as a chance to score some popularity points. None of this will ultimately help the kids become independent any faster.

Harper’s opposition to bailouts has been the message all along, until this recent wavering. Canadian banks were made to do without -- and rightfully so. Even UK Prime Minister Gordon Brown said at the G20 Summit in Peru this Fall that Canada’s economy is doing well in relation to other countries. Maybe that’s because Canada hasn’t treated the economic equivalent of a headache by whacking itself over the head with a tire iron, like almost every other developed country has been doing.

In November, Harper’s Finance Minister, Jim Flaherty, said: “Nobody wants to see taxpayers' money taken -- and then in effect wasted -- where a company is not going to survive ... we want to see the plan for survivability.” He added, without any hint of irony, that the plan should involve hybrids and other cars that no one else wants to buy, and proven bankruptcy facilitating “environmental technology”. Here’s a better plan: Back off and quit telling them what they have to do. Let them figure it out. A crash pad stuffed with cash won’t provide them with any incentive to excel -- just like the best trapeze artists, the ones who stay on the bars, don’t have any safety nets. That’s not a coincidence.

Predictably, the Canadian mining and forestry sectors are now asking for handouts. The country has turned into an ant hill, with one signaling to the others that he’s hit the mother lode.

How exactly would this $3 billion cash bonanza help the Canadian economy? It won’t -- beyond assuaging egos. Harper is being pressured to act on a feel-good liberal delusion. To wit, Liberal Senator Jerry Grafstein told a business news channel: “I say we should be taking the lead on all these issues and demonstrating how we could come up with a package, a competitive package, that would, in my view, persuade the Americans to come along as well.”

Does Grafstein not notice that even the American TV weather maps stop abruptly at the border? Barack Obama and the Democrats are going to want a Big Three bailout to placate his massive union worker voting base. The Republicans, led by Sen. Mitch McConnell (R-KY), are going to oppose it on the principle that it’s a joke of symbolism over substance, and because they saw how John McCain paid the price for selling out conservatism on the bailout issue. President Bush will find a way to slip them a few bucks on his way out the door because he doesn’t want to be held responsible for the industry tanking. I doubt that there’s any handwringing in there over what Canada is doing or thinking -- although I’m sure they appreciate the gesture. But is it worth selling out conservative principles?

The public relations effort to parlay government cash withholding for the Big Three into full-blown panic is well underway in Canada, with the Ontario Manufacturing Council (the province where the auto manufacturers are located) releasing a study showing how 582,000 Canadian jobs will be lost if the Big Three get totaled. They only actually employ 34,100 people directly, but the study says that if the Big Three collapse, “significant job losses also occur in the wholesale and retail trade sector, information and professional services, and finance, insurance and real estate. Nearly all sectors experience significant job losses over the next five years.”

And don’t forget the company that makes hula girls for your car dashboard. Or the fuzzy dice manufacturers. And the purveyors of shiny rims. Or the birth control industry -- because it’s a lot easier to get a legover in the backseat of a standard size General Motors car than a Honda Civic (or so I’ve heard).

Harper has the economic background to defend free-market economics and conservative principles and leverage his current surge in popularity, but can he sell and articulate it for mass consumption the way Ronald Reagan did? Or will he start lowering the bar and talking about depressions and recessions and bailouts, as Conservatives have already started to do this week?