Whom Is John Kerry Representing? 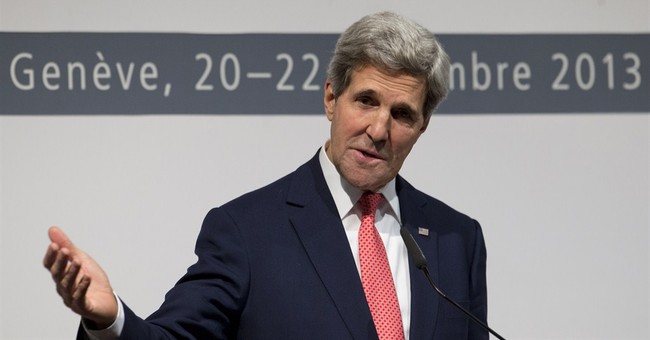 Trending
Secretary of State John Kerry is turning out to be even more dangerous than former Secretary Hillary Clinton. "The era of the Monroe Doctrine is over," he took it upon himself to unilaterally proclaim.

The Monroe Doctrine has been a fixed star in American foreign policy since Dec. 2, 1823. Its essential words are: "The political system of the allied powers is essentially different ... from that of America ... We should consider any attempt on their part to extend their system to any portion of this hemisphere as dangerous to our peace and safety."

The operative words are: "this hemisphere," "dangerous to our peace and safety" and "system." The Monroe Doctrine is not limited to military aggression; it prohibits extending the "system" of foreign powers to the Western Hemisphere, recognizing the fundamental difference between our constitutional republic and Old World empires and dictatorships.

The Marquis de Lafayette called the Monroe Doctrine "the best little bit of paper that God ever permitted any man to give the world." The policy has been successful over the centuries in keeping Old World dictatorships out of this hemisphere.

In 1823, the Monroe Doctrine was specifically directed at Imperial Russia, when Czar Alexander I was trying to colonize our Pacific coast. President James Monroe made this courageous declaration at a time when America had no standing army and a navy with only five sailing ships.

But we had a proud sense of national identity and national security. Monroe's Secretary of State John Quincy Adams stated, "There can, perhaps, be no better time for saying, frankly and explicitly, to the Russian government that the future peace of the world cannot be promoted by Russian settlements on any part of the American continent."

During the 1962 Cuban Missile Crisis, Russia was once again the problem. The American people fully backed President John F. Kennedy in forcing Nikita Khrushchev to remove Soviet missiles from Cuba.

In October 1983, the Soviet Union tried to turn the island of Grenada into a Soviet base. The American people fully backed President Ronald Reagan's use of U.S. troops to counter this threat to the Western Hemisphere, and we can look back on his rescue of Grenada as the turning point in official American policy toward Soviet communism.

The U.S. Department of State later published a selection from the 35,000 pounds of captured documents, proving how the Soviet Union had planned to use Grenada as a base of operations and supplies. Grenada was being prepared as an air base for Soviet military jets, a port for Soviet vessels and a base for exporting revolution.

One document quoted a Soviet military chief as gloating, "Nineteen years ago, we had only Cuba. Now we have Cuba, Nicaragua and Grenada -- we are making progress." But this progress was halted when Reagan ended the Cold War, as Margaret Thatcher famously said, "without firing a shot."

Like Kerry repudiated the Monroe Doctrine, he is selling out U.S. interests in other negotiations as well, many of which are conducted in secret, such as the current ones with Iran and Afghanistan. The Associated Press reported, "The U.S. declined to release specific details about the negotiations" with Afghanistan, and Kerry confirmed this week, "We have agreed on the language that would be submitted to a loya jirga."

According to what has leaked about this treaty and exposed by political commentator Diana West, U.S. forces will be forbidden to conduct combat operations in Afghanistan, or even counterterrorism operations against al-Qaida-brand terrorists, without Afghan approval. This agreement commits America to prop up a hostile, corrupt Shariah state, with all of our training and equipping of Afghan military forces subordinate to Afghanistan's approval.

The treaty includes this passage: "The United States shall have an obligation to seek funds on a yearly basis to support" the defense and security of the Afghan state. This massive new entitlement program even specifies that "relevant Afghan institutions" will dole out the dollars, so perhaps we should call them "navigators" who will be expediting "Afghan-o-care."

During President Barack Obama's 2008 campaign, he said that George W. Bush "had taken our eye off the ball" by invading Iraq instead of concentrating on Afghanistan, and Kerry charged that Bush "hoodwinked the American people" into the Iraq war. Obama presumably wanted us to look upon the war with Afghanistan as a good war with which he was glad to be personally identified.