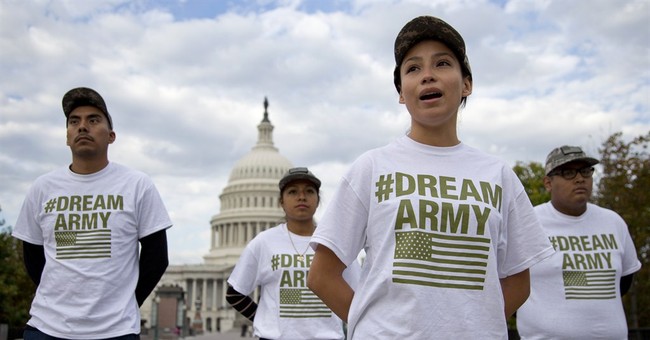 Trending
Most Americans believe that the United States of America is an exceptional country. The "borders test" proves that people are coming to America, not fleeing from America to exit to other countries.

Republicans and conservatives recognize that the principal reason for our unique abundance is our constitutional restraints on the power of government, separation of powers, balanced budgets, and a minimum of government supervision and interference in our daily lives. America offers a remarkable opportunity for foreigners; no matter what socioeconomic rank they were assigned in their native country.

Most of the millions of immigrants we have welcomed came from countries where the only government they knew was one that made all decisions about economic and social policy. The current level of legal immigration to America adds thousands of people every day whose views and experience are contrary to the conservative value of limited government.

The influx of these new voters will reduce or eliminate Republicans' ability to offer an alternative to big government, increased government spending, and favorite liberal policies such as Obamacare and gun control. New voters will lean on our hard-pressed health care system and overcrowded public schools to demand more government services.

Amnesty advocates point to the assimilation of large numbers of immigrants in the early years of the 20th century. But that was followed by a national pause and slowdown of immigration from the 1920s to the 1960s, which allowed newcomers to assimilate, learn our language, and adapt to our system of government.

Under current law, 1.1 million new legal immigrants come in every year. The Congressional Budget Office projections indicate that amnesty, plus its scheduled increases in legal immigration, will add an additional 4.6 million new voters by 2014.

An enormous body of survey research shows that large majorities of recent immigrants, who are mostly Hispanic and Asian, hold liberal views on most policy issues and therefore vote Democratic two-to-one. Their motivation is not our immigration policy; it is economic issues.

The Pew Research Center reported in 2011 that, of all groups surveyed, Hispanics have the most negative view of capitalism in America -- 55 percent. This is even higher than the supporters of Occupy Wall Street.

The data do not support the notion that immigrants are social conservatives. Heather MacDonald of the Manhattan Institute points out that, "It is not immigration policy that creates the strong bond between Hispanics and the Democratic Party, but the core Democratic principles of a more generous safety net, strong government intervention in the economy, and progressive taxation."

The current level of immigration, even without amnesty, will add nearly 15 million new potential voters by 2036, a large share of whom will favor the left. To allow this to happen will make Republicans a permanent minority party.

Looking at the political motivation of the groups pushing higher immigration and amnesty, it's obvious that the Democrats promote large-scale immigration because it produces more Democratic votes. But why are some prominent Republicans pushing amnesty?

The pro-amnesty New York Times gleefully reported on Oct. 26 the front-page news that big-business leaders and Republican big donors are gearing up for a "lobbying blitz," backed up by money threats, to get Congress to pass amnesty. Big business wants amnesty in order to get more cheap labor and keep wages forever low, and that is a gross betrayal of the legal immigrants who hope to rise into the middle class and achieve the American dream.

The big donors poured $400,000,000 into the campaigns of losing establishment-backed Republican candidates in 2012. They would rather elect Democrats than conservative, social-issue Tea Party-type grassroots Republicans who don't take orders from the establishment.