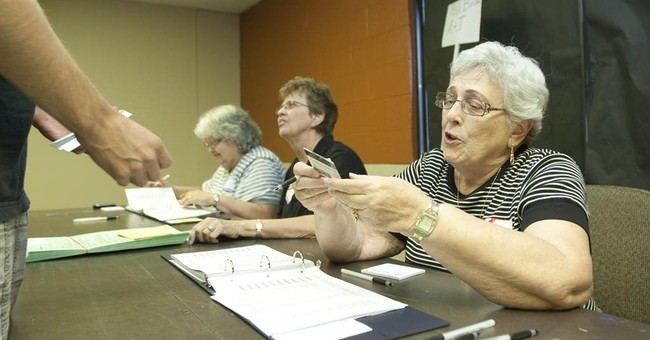 North Carolina is showing the way for conservatives to rise above their post-2012 depression and regain the political initiative. Governor Pat McCrory just signed a law requiring voters to show a valid photo ID for voting, prohibiting same-day registration and reducing the number of days for early voting from 17 to 10.

This common-sense voter ID law, which passed the North Carolina Legislature with more than two-thirds majorities in the House and Senate, is very popular. A Washington Post poll found that 74 percent of Americans believe that people should have to show photo identification to vote.

The liberals are having tantrums, and their media friends have been displaying pictures of street protests. The NAACP promptly filed a lawsuit, hoping that a supremacist judge will overturn the will of the majority.

Liberals make the absurd claim that requiring photo ID is discriminatory because some minority groups may be unable to provide proper ID. But government-issued photo identification can be obtained by anyone at very low cost.

We already need photo ID, aka a driver's license, to drive to work, which is rather important to most people. Welfare recipients are required to show photo ID to receive money in many states, and we haven't heard any gripes about ID discrimination.

If the poorest members of society can obtain photo ID to get taxpayer-funded handouts, they should be able to do likewise for voting. The real reason the Left wants to make sure that individuals without voter ID are allowed to vote is because they are expected to vote for Democrats.

The new North Carolina law also eliminates straight-party voting. The straight-party option allows poorly informed voters to vote for all candidates from one party with just one mark, without even reading the names of the candidates.

The reduction in the number of days allowed for early voting is particularly important because early voting plays a major role in Obama's ground game. The Democrats carried most states that allow many days of early voting, and Obama's National Field Director admitted, shortly before last year's election, that "early voting is giving us a solid lead in the battleground states that will decide this election."

The Obama technocrats have developed an efficient system of identifying prospective Obama voters and then nagging them (some might say harassing them) until they actually vote. It may take several days to accomplish this, so early voting is an essential component of the Democrats' get-out-the-vote campaign.

Early voting is a matter of state law, and some states don't allow it at all. Lawsuits by the NAACP and the ACLU are seeking to overturn laws limiting early voting by making contrived arguments that these laws violate the Constitution, which is ridiculous.

Early voting is actually contrary to the spirit of the U.S. Constitution. Article II states, "the Congress may determine the Time of choosing the Electors, and the Day on which they shall give their Votes, which Day shall be the same throughout the United States." Federal law sets the date for national elections on the Tuesday after the first Monday in November.

Early voting increases the influence of big money spent on campaigns because it requires candidates to campaign, to spend and to buy expensive television ads over additional weeks. Early voting increases opportunities for ballot fraud because the necessary poll watchers we expect to be on the job at polling places on Election Day can't be present for so many days.

Encouraging people to close their minds and cast an irrevocable ballot before all the presidential debates are held is as harmful to a fair outcome as it would be to allow jurors to vote guilty or not guilty before they hear all the evidence in a trial. Hillary Clinton called the North Carolina law's provisions "the greatest hits of voter suppression," but the real "hits" are the way illegal votes cancel out the votes of honest Americans.

In 2012, the Democrats were so sure that North Carolina was a happy hunting ground for their votes that they held their National Convention in Charlotte to re-nominate Barack Obama. North Carolina promptly responded by voting down same-sex marriage in a referendum and then passing a bunch of good laws. So, cheer up, conservatives.

In addition to the helpful new voting laws, North Carolina passed stricter regulations on abortion clinics, ended teacher tenure, cut unemployment benefits, blocked the expansion of Medicaid and (despite the scorn of propagandists for the national takeover of education by Common Core) mandated the teaching of cursive writing. Maybe that's why the liberals are so angry: Kids will now be able to read letters from their grandmothers.

Grandfather Pleads to His Community: If Black Lives Matter, Stop Killing Each Other
Katie Pavlich

Unanimous SCOTUS to Electoral College: Keep the faith — or else
Hotair
ABC Finally Gives Us The Scoop On Who Hit the Protesters in Seattle and It’s Unreal
Redstate