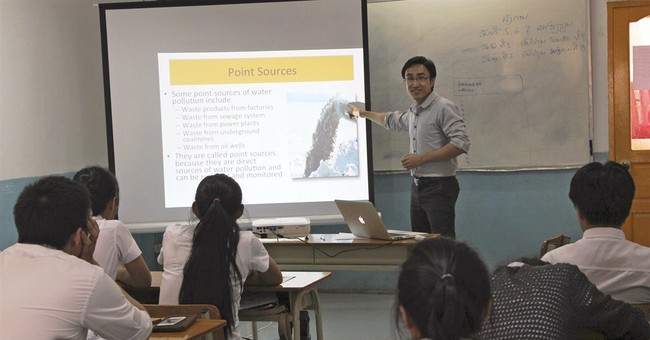 The new education standards called Common Core won't make U.S. kids any smarter. It would be better if states used their own revised and improved version of standards already successfully piloted in 12 states.

The overall Common Core strategy is to raise the scores of average students by a point or two but do nothing to motivate or help the smarter kids or the dumber kids. CC's goal is to achieve a result like Lake Wobegon, the fictional Minnesota town where "all kids are above average."

Professor Sandra Stotsky, a member of the CC validation committee, refused to approve the standards finally published and explained: "Common Core has carefully disguised its road to equally low outcomes for all demographic groups, and many state boards of education may quickly follow up their unexamined adoption of Common Core's K-12 standards ... by lowering their high school graduation requirements in the name of alignment."

CC advocates continue to say that CC standards are not a curriculum but are merely standards. But it's clear that the curriculum must be aligned with the CC tests so teachers will be compelled to teach to the test.

A report by the UCLA-based National Center for Research on Evaluation, Standards and Student Testing concluded that "educators will align curriculum and teaching to what is tested, and what is not assessed largely will be ignored." Bill Gates, the largest individual financial contributor to Common Core, told the National Conference of State Legislators, "We'll know we've succeeded when the curriculum and the tests are aligned to these standards."

The CC English standards replace about half of the readings in literature classics with "informational" materials, which CC advocates say are supposed to promote analytical thinking by students. In a report released by the Pioneer Institute, Stotsky gave an example of her grandson's experience.

The students were assigned to read selections on the fate of the Taino Indians and from a diary supposedly written by Christopher Columbus' cabin boy, and then were told to write to a state official opining on whether Columbus should be honored by a state holiday. Every student's letter said Columbus should not be so honored. That's how "informational" reading morphs into liberal propaganda.

Common Core gives leftist educators a backdoor for bringing leftwing activism into the classroom. NPR reported that one veteran teacher, Melinda Bundy, replaced her popular unit about King Arthur and his Knights of the Round Table with one about President John F. Kennedy and the 1960s because, she said, she "adored JFK."

Comic books and graphic novels were formerly considered useful primarily for underachieving students and poor readers as a means to get them interested in books. But now Common Core is bringing picture books into the mainstream of education.

At a National Council of Teachers of English conference, the teachers of a senior Advanced Placement honors course presented an argument against having students read "Beowulf" and substituting a comic book based on "Beowulf." No doubt parents will be told that CC includes classic literature such as "Beowulf."

The outgoing president of the Missouri branch of the NEA said CC will "prepare our kids for a global community, a global society. These are going to exactly take us there."

The new science standards, called "Next Generation Science Standards," were examined by nine scientists and mathematicians for content, rigor and clarity, after which the Fordham Institute gave them a grade of "C." They criticized the "ceiling on the content and skills that will be measured at each grade," the excluding of content that more advanced students can learn, the failure "to include essential math content that is critical to science learning" in physics and chemistry, and the "confusing" wording of the standards.

Proponents of evolution and manmade climate change are ecstatic about the new Common Core science standards. Education Week reports: "The standards make clear that evolution is fundamental to understanding the life sciences."

Common Core does not prepare students to major in the STEM subjects at a university. CC prepares students only to enroll in courses at two-year community colleges.

Always a friend of parents' rights, Sen. Chuck Grassley, R-Iowa, is leading an effort to persuade Senate appropriators to restore state-level decision-making about academic content in public schools in order to counter the way federal incentives have forced states to adopt the Common Core standards. He wants the Senate "to restore state decision-making and accountability with respect to state academic content standards" because "parents ought to have a straight line of accountability to those who are making such decisions."