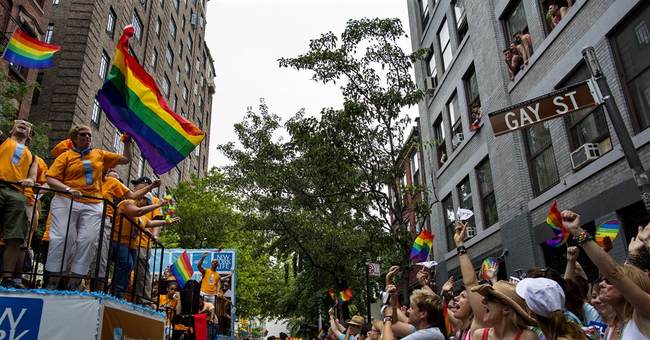 The Supreme Court decision on marriage, as Justice Antonin Scalia wrote in his dissent, "is an assertion of judicial supremacy over the people's Representatives in Congress and the Executive. It envisions a Supreme Court standing (or rather enthroned) at the apex of government, empowered to decide all constitutional questions, always and everywhere 'primary' in its role."

Scalia said this role would have been unrecognizable to those who wrote our Constitution. They knew the dangers of "primary" power and that's why they divided power into three branches of government.

The New York Times headlined its report with the bald-faced lie that the court "Follows the Nation's Lead." Au contraire: The court ignored the nation's lead. The court rejected the majority vote of the people of 31 states, including our nation's bluest state, California, and ignored the fact that the traditional definition of marriage is enshrined, either by statute or state constitution, in 38 states.

Not only were the court's decisions wrong, but, as Scalia wrote, the Supreme Court had no power under the Constitution to invalidate those two democratically adopted laws, the Defense of Marriage Act (DOMA) and California's Proposition 8. California passed Proposition 8 in a ballot initiative procedure designed to enable the people to correct public officials' actions that are not acceptable to the people.

The California Attorney General refused to defend the law, so the Proposition 8 sponsors joined the case to defend their properly enacted initiative. After the California state supreme court upheld Proposition 8, the same-sex-marriage advocates ran to supremacist federal judges to overturn the voters' wishes.

They succeeded by getting the Supreme Court to reject the "standing" of the Proposition 8 sponsors to defend their victory. That ruling defeated the whole democratic process of a citizen initiative because it enables public officials to overrule the will of the voters (expressed by winning a ballot initiative) by simply refusing to defend the law in court. The 27 other states that use initiatives will now be worried about their validity.

The other marriage case decided by the Supreme Court declared DOMA unconstitutional, thereby substituting a judicial edict for the will of our elected representatives. DOMA was passed by Congress in 1996 by large bipartisan majorities and signed by President Bill Clinton.

Justice Scalia was scathing in describing the failure of the Court to identify any basis in the Constitution for its conclusion that DOMA is unconstitutional. Scalia criticized Justice Kennedy's "nonspecific hand-waving" about equal protection, substantive due process and federalism but appeared to say that the principal basis for Congress enacting DOMA was its supporters' "desire to harm a politically unpopular group."

Speaking for the court's majority, Justice Kennedy accused DOMA supporters of acting with malice, with the purpose "to disparage and to injure" same-sex couples, to "impose ... a stigma," to deny them "equal dignity," to brand them as "unworthy" and to "humiliate" their children. All of this is obviously false.

Scalia expressed shock about the way Kennedy bolstered his argument with malicious slurs on the Members of Congress who voted for DOMA. As summed up by Scalia, Kennedy laid down his edict. "Hate your neighbor or come along with us," and that kind of insulting argument should be out of bounds for the Supreme Court.

These two decisions about marriage by a divided Supreme Court do not end the debate about whether America must or will accept same-sex marriage. As one of the same-sex-marriage advocates boasted, let the litigation begin.

It's easy to see dozens of lawsuits coming down the pike to address questions the Supremes did not answer. For example, must a state that forbids same-sex marriage recognize the marriage of a couple that gets married in a state where that is legal?

Let's recall how Abe Lincoln responded in his First Inaugural Address to the Supreme Court's historic mistake, the Dred Scott decision. The court had ruled that a man must be protected in his alleged constitutional property right of owning his slave, Dred Scott, even when they traveled to Illinois, a free state.

Lincoln said that the court's erroneous decision should be limited to that particular case and never allowed to become a precedent for other cases, with the hope that it may one day be overruled. Then Lincoln warned that if we allow policy on vital questions to be irrevocably fixed by the Supreme Court, we will no longer be a self-governing people but merely subject to "that eminent tribunal."

As Scalia said about the court's decisions, "We might have let the People decide." But the Supreme Court justices acted like supremacists who used their power to dictate public policy, overturn what has been our marriage law for centuries, and insult anyone who disagrees.

Is This the Most Embarrassing Anti-Gun Op-Ed Ever Written?
Townhall
'She's OLD, she gets cold': Taylor Lorenz posting pic of her thermostat set at 90 pisses both the Right AND the Left off
Twitchy
Ted Cruz Provides Helpful Translation After Nina Jankowicz Trots out the 'Victim' Card
Redstate
APPALLING: Teen Girl Disappears at NBA Game and Turns Up 11 Days Later in Nude Photos on Sex Trafficking Site
PJ Media