We Should Reform Child Support 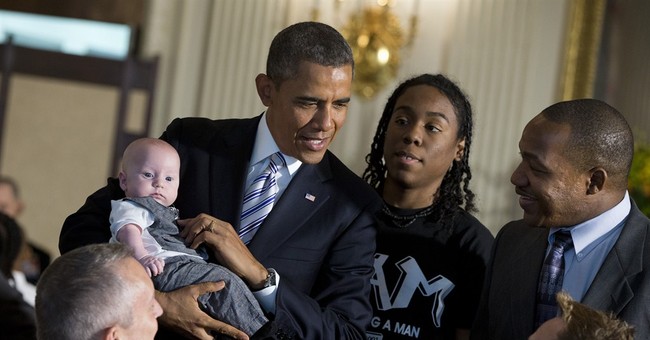 President Obama's Father's Day speech included one provocative, yet very declarative, sentence: "We should reform our child support laws to get more men working and engaged with their children." Obama didn't elaborate, but we can build on what he said because, yes indeed, child support laws urgently need "reform."

Many fathers work long hours and make incredible sacrifices for their families. Child support formulas are based on the ridiculous notion that a father would make those same sacrifices for an ex-wife who is living with her new husband or boyfriend and for children he never or seldom sees.

Many fathers would happily do more to support their children if they got to see their kids more and were more engaged in their lives. But current child support laws have reverse incentives: The more the mother prevents such contact, the more child support she receives.

Because of perverse incentives, a so-called "no fault divorce" is often followed by a bitter child custody dispute with bogus allegations of domestic violence or child abuse, and the winner can get a huge child support windfall. Usually the family court judge cannot tell who is telling the truth.

Reform should eliminate these bad incentives. No parent should collect money for denying kids the opportunity to see the other parent, and payments should not exceed reasonable documented child expenses. If both parents are willing and able to manage joint child custody, there should be no necessity for child support payments.

As annoying as the IRS is, it follows accounting rules and taxes only actual income. But a family court judge can ignore current income (or lack thereof) and instead calculate child support on past income or on imputed future income.

We can no longer ignore how taxpayers' money is incentivizing divorce and creating children who never or seldom "engage" (Obama's word) with their fathers. We can no longer ignore the government's complicity in the predictable social costs that result from more than 17 million children growing up without their fathers. Fatherless boys and girls are much more likely to run away, abuse drugs, get pregnant, drop out of school, commit suicide or end up in jail.

The root of the family court evil is the redefinition of a legal doctrine called the Best Interests of the Child. This phrase originally meant the presumption that courts should generally stay out of family decisions because, as the Supreme Court wrote in 1979, "natural bonds of affection lead parents to act in the best interests of their children."

This phrase is now used as an affirmative grant of power to family court judges to overrule parents on all child-related issues. Three things are wrong with the current interpretation of Best Interests of the Child.

First, it is contrary to the rule of law by giving judges extraordinary discretion to enforce their own prejudices and to micro-manage lives. They punish parents for things that were never written down as crimes or offenses.

Second, the "best interests" standard undermines parental rights. Instead of saying that parents are the final authorities, as the family unit was understood for centuries, it allows judges to make routine child-rearing decisions.

Third, courts have no competence to determine a child's best interests, so they rely on poorly trained evaluators who make unscientific recommendations about custody and visitation. There is rarely any evidence that a court-defined schedule is better than joint child custody.

Reform should get family courts out of the practice of pitting parents against each other, entertaining criminal accusations without evidence, assessing onerous support payments, sending dads to debtors' prison and appointing so-called "experts" to make parenting decisions. Instead, the courts should protect the rights of both parents.

In past Father's Day messages, Obama has blamed fathers for abandoning their responsibilities, but this year's message had no such comment. Perhaps Obama has learned that many fathers are locked out of their rights and responsibilities by family courts.