Obamacare Heading for a "Train Wreck" 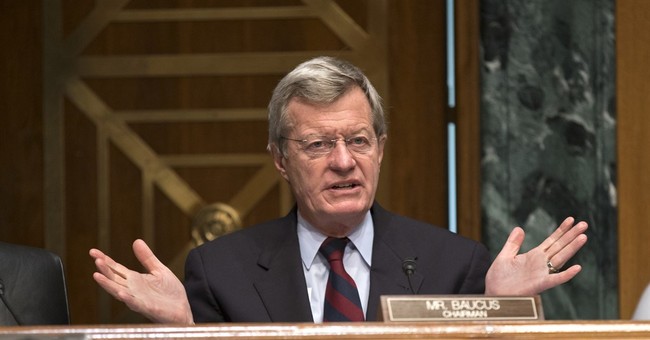 Obamacare was supposed to be a big success by now, according to predictions made by liberals who railroaded it through Congress in 2010. Instead, as admitted by one of its leading architects, Democratic Sen. Max Baucus, it's heading for a "train wreck" later this year.

Baucus' apt metaphor is being echoed by other Democrats because it is so obviously true. Harry Reid said, "I agree with him." Sen. Jay Rockefeller described it as "so complicated" that it's "beyond comprehension." Henry Chao, the government's chief technical officer in charge of implementing the exchanges, said, "Let's just make sure it's not a Third World experience."

The outcry over the length of the 21-page application form (with a 61-page instruction manual) resulted in a cosmetic shortening. The same nosy questions are now asked on three separate forms (of three, five and 12 pages), plus three appendices, plus a requirement that families with more than one child "make a copy of pages 4 and 5 and complete" them for each additional child.

Most states have repudiated key aspects of this misguided law, with the result that our nation is divided between about 16 "Obamacare states" and 34 states that respect individual liberty. Every state in the South, from Virginia to Texas, has rejected a central part of Obamacare by declining to increase its Medicaid rolls, despite the promise of massive federal handouts.

The official name of Obamacare is the Patient Protection and Affordable Care Act, but this law is turning out to be neither protective of patients nor affordable. The American public was promised that we could keep our insurance and physicians, but in fact, many millions will lose their health insurance and access to their own physicians.

Several Republican governors caved in to pressure by the media and the hospital industry to embrace the costly Medicaid expansion, but then they were embarrassed by their own Republican state legislatures, which rejected this boondoggle. Medicaid spends billions on administrative costs and only a small percentage on quality medical care, so this inefficient program should be trimmed, not expanded.

Obamacare is causing reductions in hours worked and paychecks for many Americans as businesses seek to reduce their Obamacare penalties by decreasing the number of employees who work 30 hours or more a week. Companies having at least 50 full-time employees must purchase expensive health insurance or else pay $2,000 or more in fines for each employee who works at least 30 hours a week.

Many businesses have decided to pay these fines rather than buy costly insurance for services, such as abortion-inducing drugs, that they do not even want. Government-approved health insurance policies will not cover many of the services that people can buy now with their own Health Savings Accounts.

Obamacare's much-publicized health insurance exchanges, supposedly designed to make insurance more affordable, have been a bust. Two-thirds of the states have declined to set up exchanges, and taxpayer costs for them have ballooned to $5.7 billion for the federal government to establish them.

It seems doubtful that the Obama administration will comply with Obamacare by the date it is scheduled to become fully effective: Jan. 1, 2014. At a news conference last week, President Obama failed to reassure us by making this clueless comment, "Anytime you're implementing something big, there's going to be people who are nervous and anxious about 'is it going to get done' until it's actually done."

Headlines proclaim the stock market's new record highs, but the average American paycheck and fringe benefits are lagging far behind due to Obamacare. Obamacare is causing retail stores to reduce hours (and paychecks) for their employees at the fastest rate in more than 30 years in order to avoid Obamacare penalties.

While politicians brag that employment has increased by 1 percent over the past year in retail, the total hours worked has actually fallen by 0.9 percent during that same period. Employee fringe benefits in the service sector fell sharply in the first quarter for the first time in more than a decade.

A significant portion of the increase in overall employment is in temporary workers who are increasingly used by businesses to reduce Obamacare's penalties. Obamacare is causing a shift in private employment to less desirable temporary jobs and jobs of shorter hours.

Many young people who voted for Obama are in for a surprise when they realize how much Obamacare will cost them. College students in New Jersey face an increase in insurance costs from a few hundred dollars annually to $1,700 or more, so Democrats have rushed to repeal a New Jersey law that requires college students to buy health insurance.

A narrow vote in the U.S. Supreme Court upheld Obamacare last summer by calling it a tax, even though Americans repeatedly were told by Democrats that it was not a tax. As bad as new taxes are, this Obamacare train wreck is even worse than a tax.