The Real Loser In The Massachusetts Election 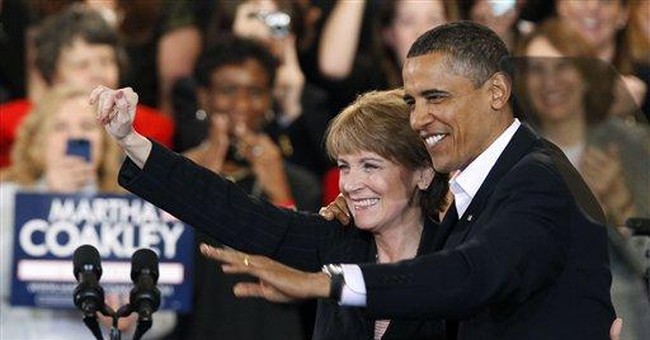 Smarting from their surprise loss in the race to fill the U.S. Senate seat in Massachusetts, the Democrats are throwing their candidate, Martha Coakley, under the bus. They blame her for running a poor campaign that made losers out of Barack Obama, the Democrats, their bad health care bill and even Ted Kennedy in his grave.

Many reasons, of course, contributed to Scott Brown's remarkable victory. However, the chief reason Coakley's campaign didn't connect with the voters is that she is a feminist, causing even a liberal female TV commentator to admit she is "unappealing."

The feminists for years have had a stranglehold over the Democratic Party, enforcing their rule that every Democratic presidential candidate must pledge his fidelity to abortion with taxpayer funding. But abortion is only the first commandment of feminist ideology, and Coakley revealed much, much more, so let's use her defeat as a teaching moment.

"Martha's a really great candidate for everything that NOW stands for," gushed Christina Knowles, director of the Massachusetts chapter of the National Organization for Women (NOW). Coakley was, indeed, a really great advocate for NOW's feminist ideology, but that did not attract the voters.

Those comments fit the profile of feminists who have contempt for men's sports and therefore have eliminated hundreds of men's teams from college athletic programs under a misinterpretation of Title IX. Howard University even canceled both wrestling and baseball on the same day, giving double pleasure to the hateful feminists.

Boston University is the largest school in Boston, but it no longer has an NCAA baseball team. Nationwide, feminist opposition to anything masculine has forced the elimination of more than 450 wrestling teams.

Coakley insulted people with religious values by declaring that those who oppose abortion probably shouldn't work in emergency rooms because an occasional patient might demand an immediate abortion. Feminists refuse to allow respect for a right of conscience because that might get in the way of their ideology that abortion is women's premier right.

Feminists pretend they want all laws and behavior to be gender-neutral, with identical treatment of male and female (and other genders, whatever they are). But when it comes to domestic violence and child abuse, feminist ideology decrees that men are naturally batterers and women never lie so they don't have to present evidence in order to convict a man.

As prosecutor, Coakley followed this pattern when she insisted on treating a falsely accused man worse than a falsely accused woman. As copiously detailed by Dorothy Rabinowitz in The Wall Street Journal, Coakley persecuted the Amirault family for child abuse even after it became widely recognized that they had been imprisoned on false charges.

Although virtually everyone aware of the Amirault case recognized it to be as preposterous as the false allegation of rape against the Duke lacrosse players, Coakley insisted on continued incarceration of the Amirault brother in contrast with the release of his sister. Coakley insisted that when women are involved in child abuse cases, the real culprit is typically "a primary male offender."

Eventually, the falsely accused man, Gerald Amirault, was released by the extraordinary intervention of the Massachusetts parole board, considered the toughest in the nation. That followed an exhaustive investigation, but Coakley continued to pretend that he was somehow guilty.

Democratic Party leadership has shown that it cannot or will not stand up to the incoherent, man-hating attitude of feminists like Coakley. For example, after they had a tantrum and demanded that the majority of jobs created by Obama's stimulus be given to women (instead of to shovel-ready jobs), even though most of those who lost jobs in this recession are men, President Obama dutifully acquiesced.

It's no wonder that non-college-educated men voted overwhelmingly for Brown against Coakley by a massive 27-point margin. The Democrats are lucky enough to elect some feminists, but feminists are just too unappealing when running against a masculine man such as Brown.

Brown's driving a 2005 GMC pickup truck (which Obama sneered at) symbolized the elitism of Coakley, who drives a foreign car. While Coakley was sipping wine with drug and insurance company PAC representatives, Brown was shaking hands with the voters.

Commentary about Brown's appeal to women is diversionary -- it was male voters who overwhelmingly pulled the lever for him. Men are fed up with the feminist mindset and delivered a clear message in the Massachusetts election: give us a candidate who stands up to the feminists, and we will cross over from Democrat and independent to elect a Republican.