What's In and What's Out of Health Care Legislation 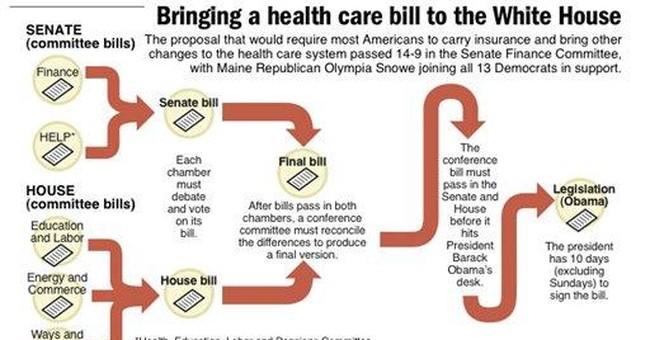 As liberals rush Obamacare through Congress, let's review the disparity between promises and text. Joe Wilson's declaration "You lie!" is ringing truer with each passing day.

Barack Obama promised "transparency" and to give the public five days to read the bill, but Sen. Jim Bunning's amendment to require the bill, along with a final Congressional Budget Office score, to be posted online 72 hours before the vote was defeated. Reps. Brian Baird, D-Wash., and Greg Walden, R-Ore., have been trying to get the House to agree to post the bill 72 hours before the vote. Most Republicans have signed on, but the Nancy Pelosi leadership is unwilling.

Obama promised that the health care bill would not cover illegal aliens, but Sen. Chuck Grassley's amendment to require immigrants to prove their identities with photo IDs was rejected.

Obama promised that if you like your current health insurance, you won't have to change it, but Sen. John Cornyn's amendment to assure present insurance owners that they wouldn't have to change their coverage and that they could keep the coverage they have with their current employers without government driving up cost was defeated.

Obama's appointment of 34 czars includes a health care czar, but Sen. John Ensign's amendment to require any health care czar to be subject to the constitutional Senate confirmation process was defeated. Obama's new regulatory czar, Cass Sunstein, defends removing organs from terminally ill patients and from deceased people, even when they did not consent to be organ donors.

Obama promised that under his plan, "no federal dollars will be used to fund abortions," and his press secretary, Robert Gibbs, tried to divert attention from this bold lie by obfuscating the Hyde Amendment. But the Hyde Amendment is not a law; it's a one-year-at-a-time rider that applies only to current Medicaid programs, and it would not apply to the health care law.

The Democrats five times (twice in Senate committees, three times in House committees) defeated amendments to prohibit the health care plan from spending federal money or requiring health insurance plans to cover abortions. They also defeated Sen. Orrin Hatch's amendment to respect the conscience rights of health care workers who do not want to perform abortions because of moral or religious objections.

One amendment that did pass was Sen. Maria Cantwell's amendment, which would give the secretary of health and human services the power to define cost-effective care for each medical condition and to punish doctors who treat high-cost patients with complex conditions. That has been Obama's goal from the beginning and inevitably will lead to the "death panels" Sarah Palin warned about.

Former Sen. Tom Daschle, who was scheduled to be health and human services secretary or health care czar until he had to bow out, said that the law should be written in generalities so the bureaucrats can fill in the details. Dr. Ezekiel Emanuel, brother of chief of staff Rahm Emanuel and a key Obama health care adviser, may be behind the stimulus legislation that will send "embedded clinical-decision support" to doctors via computer to warn them about what is "appropriate" and "cost-effective," backed up by the threat to impose financial penalties on doctors who are not "meaningful users."

The Democrats' health care "reform" would carry a trillion-dollar price tag, vastly increase the national debt hanging over our children and grandchildren, impose socialist control over one-sixth of our economy, and force us to obey totalitarian dictates. The mandate on employers to provide health insurance would result in lower wages and fewer jobs.

Obama's "spread the wealth around" policy is evident in the big expansion of Medicaid combined with large cuts in Medicare. Former Health and Human Services Secretary Michael Leavitt says that the combination of mandates to buy insurance, guaranteed issue, and community rating amounts to massive income distribution that is hidden from public view and not even debated.

Finally, we are subject to the deviousness of what House Minority Leader John Boehner calls the 70 phantom amendments, which were added in secret after the bill was voted out by the committee. The bill may be even worse than we think.