The Opportunity of a Century 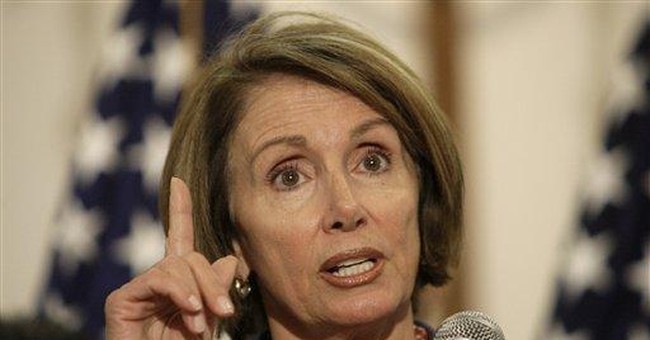 Speaker Nancy Pelosi said one correct thing: health care legislation is our "opportunity, not of a lifetime, but of the century." Passage of the bill she supports would put us forever on the road to trillions of dollars in debt, bankruptcy and European mistakes; defeat of the bill will safeguard the unique American recipe for liberty and prosperity.

Pelosi and her friends would give more control to patients over their medical care IF the liberals really wanted to improve quality and reduce cost. Instead, they are trying to push our nation in the opposite direction, taking away control from patients over access and choices for medical care.

We should eliminate the roadblocks that are built into current law to restrict our use of health savings accounts (HSAs) and high-deductible insurance (such as $2,500). Pre-tax money put into HSAs by the individual and by the employer can be used for costs not covered and, if not spent, can be saved and grow as a savings account for the individual.

This puts the individual in charge of spending for health-care costs up to the deductible limit when insurance coverage kicks in. This assures that the first $2,500 will be spent more carefully and thereby promote competition and lower costs.

We should give individually owned health insurance the same tax deduction that has been enjoyed for decades by employer-provided health insurance. This is a matter of fairness; where are the equal-protection litigators when we need them?

The Democrats are toying with going in the opposite direction: eliminating the tax deduction for employer-based plans. That translates into a big tax increase for the middle class.

We should repeal all state laws that forbid insurance companies to compete across state lines, so that individuals can buy health insurance in states other than their own. Where are the free-trade devotees when we need them?

We should repeal all government mandates on benefits that health insurance is required to cover so individuals can choose the insurance package that fits their needs. These last two changes would be the best way to establish real insurance company competition.

Again, the Democrats are going in the opposite direction: imposing a federal mandate on what benefits health insurance must cover (which will include abortion, mental health and all sorts of services demanded by special-interest groups). Insurance mandates are how the Democrats expect to control the health care industry if they can't round up the votes to impose the "public option."

We should enact tort reform so that doctors won't be chased out of practice by ruinous lawsuits and over-the-top malpractice insurance rates. The Democrats won't do this because the trial lawyers are their biggest source of campaign contributions.

The left has started a nasty attack against John Mackey, founder and CEO of Whole Foods Market Inc., because he wrote an article in The Wall Street Journal endorsing these common-sense reforms. He practices what he preaches -- his company provides a popular HSA plan for its employees.

The left is incensed that Mackey not only supports practical reforms but also explained the folly of making health care a massive and costly entitlement that would create trillions of dollars of new unfunded deficits and empower government instead of people.

The left is venting its rage on Twitter, Facebook and the blogosphere, and even trying to organize a Whole Foods Boycott.

I prefer Whole Foods over Nancy Pelosi, so I'm going to double my shopping at Whole Foods and urge liberty-loving and cost-conscious Americans to do likewise. I'm a fan of Whole Foods' healthy foods and vitamins, anyway.

Here are two more health care reforms that Mackey didn't mention that I would add to the list. The Democrats craftily built two loopholes into their 1,000-page bill that must be closed.

Pelosi's bill deceitfully covers abortion at taxpayer expense by refusing to exclude it. The Democrats and the feminists consider abortion merely routine health care, like appendectomies, and they know that the traditional Hyde Amendment, which denies taxpayer funding for Medicaid abortions, will not apply to the health care bill.

The bill does mention excluding illegal aliens but provides no verification mechanism. Therefore, illegal aliens will be covered by the Democrats' health care bill unless proof of citizenship is specified as a requirement.

Don't let anybody tell you that "co-ops" are an acceptable alternative to the public option. Co-op is just a code word for the government to mandate the benefits that private insurance must provide, so co-ops will rapidly move us to socialist control of the health care industry just as fast as the public option.