The Plans for Economic Integration 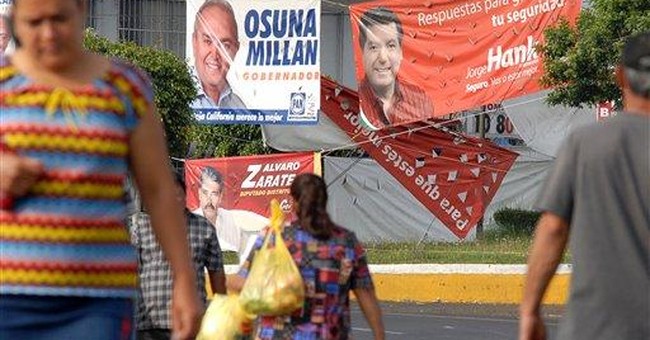 Canada in the summer and Mexico in the spring offer good weather for planning international policies. Nervousness about the political weather, however, is putting the third Security and Prosperity Partnership summit taking place Aug. 20-21 at a site where the uninvited can be easily excluded: the Fairmont Le Chateau Montebello resort about 50 miles outside of Quebec.

The cheering gallery for SPP is hysterically chanting that its goal is not a North American "union" modeled on the European Union - and that anyone who thinks otherwise must be peddling conspiracy fears. But SPP supporters candidly admit they want North American "integration," which might be a distinction without a difference.

President George W. Bush started down this trail on April 22, 2001, when he signed the Declaration of Quebec City in which he made a "commitment to hemispheric integration." After Communist Hugo Chavez took over Venezuela, "hemispheric" was quietly scaled down to the Security and Prosperity Partnership of just North America.

The lobbyists for integration are bringing heavy-artillery reinforcements to their cause: a pro-integration report written by a prestigious think tank, the Center for Strategic & International Studies. The report is now being translated into Spanish and French so it can be presented to all three governments in September.

The importance of the Center for Strategic & International Studies comes from the political influence of its trustees. They are longtime internationalists and architects of some of the worst foreign and defense policies of the past 50 years.

A 25-page advance peek at the report has been released under the caption "North American Future 2025 Project." The core of the plan for America's future is North American "economic integration" and "labor mobility," key words that are repeated again and again in this report.

The threat to good U.S. jobs is obvious from the redundancy of demands to import cheap labor without limits: "international migration of labor," "international movement not only of goods and capital, but also of people," "mobile labor supply," "North American labor mobility," "flows of labor migration," and "free flow of people across national borders."

The report explains that "border infrastructure" means the "efficient flow of labor across North American borders" so we can "pool the human capital necessary to source a competitive North American work force." It's unlikely that U.S. workers want to "pool" their jobs with Mexico where the median minimum wage is $5 a day.

Slyly revealing the plan to integrate governments as well as economies, the report states: "To remain competitive in the global economy, policymakers must devise forward-looking, collaborative policies that integrate governments." In an attack on the unique American patent system and fountainhead of U.S. innovation superiority, the report calls for "harmonizing legislation" with other countries in the area of intellectual property rights. The report also calls on us to "harmonize" regulations of all kinds by adopting "unified North American regulatory standards."

No wonder the CSIS admits that its report was developed in "seven closed-door roundtable sessions." Let's call the roll of the trustees of this influential think tank: Henry Kissinger, who was the architect of the Nixon-Ford policies repudiated by Ronald Reagan; James R. Schlesinger, the secretary of defense for Presidents Richard Nixon and Gerald Ford; Zbigniew Brzezinski, the trilateralist who was President Jimmy Carter's chief foreign policy adviser.

William Cohen, who was President Bill Clinton's secretary of defense; Harold Brown, who was the secretary of the Air Force carrying out Secretary of Defense Robert McNamara's disarmament policies in the 1960s; and Brent Scowcroft, former vice chairman of Kissinger Associates and national security adviser to President George H.W. Bush.

The frontman for this galaxy of globalists is former Sen. Sam Nunn, D-Ga. One more household name is former Deputy Secretary of State Richard Armitage, the man who leaked Valerie Plame's name to the press.

Business authority Peter F. Drucker wrote in his 1993 book "Post Capitalist Society" (Collins, $16.95) that the European Union "triggered the attempt to create a North American economic community, built around the United States but integrating both Canada and Mexico into a common market."

He gleefully added, "So far this attempt is purely economic in its goal, but it can hardly remain so in the long run. ... The economic integration of the three countries into one region is proceeding so fast that it will make little difference whether the marriage is sanctified legally or not."

Now that the game plan is laid out, we can connect the dots: the North American Free Trade Agreement; the admission of Mexican trucks onto U.S. highways; the contract to build the TransTexas Corridor and the plans to extend it into a NAFTA Superhighway; making Kansas City an international "port"; the "totalization" of illegal immigrants into the U.S. Social Security system; and the recently defeated Senate amnesty bill. That bill would have integrated 20 million illegal immigrants into the U.S. labor force, locked us (by Section 413) into the SPP, and spent massive foreign aid to "improve the standard of living in Mexico."