Children's Rights Should Include Life With Both Parents 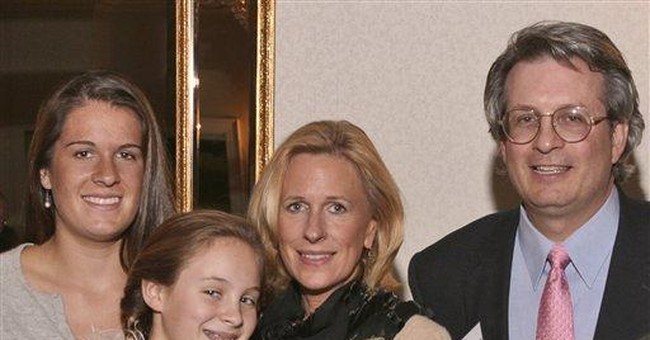 Debates about same-sex marriage and gay adoptions always include the argument that a child has the right to both a father and a mother. If that is true, why is a child usually deprived of that right when heterosexual couples divorce? It would seem that maintaining the father's love and authority would be crucial when a child's life is turned upside down by divorce. Yet, family courts routinely deprive children of one parent, usually the father, restricting his time with his child to about six days a month. The courts pompously assert they are invoking "the best interest of the child," but how can it be in the best interest of children to make them forfeit one parent?

Some states are considering legislation that establishes a presumption of shared parenting whereby divorced parents divide equally both time and authority over the children. This enables children to maintain strong ties to both parents.

When primary or sole custody is given to the mother, the father becomes merely a visitor in the child's life (that's why it's called "visitation"), whose only value is to mail a paycheck and be an occasional baby sitter. The father loses his parental authority and fades out of his own child's life. An argument is sometimes made that shuttling back and forth between two homes might be upsetting or a nuisance, but there is no more shuttling with equal custody (where parents, for example, get alternating weeks) than with the typical mother-custody/father-visitation schedule (where the father gets two weekends a month plus some Wednesday evenings). Do the math; both plans have about the same number of shuttles between homes.

An argument is also made that giving custody primarily to the mother promotes stability, but the need for stability is really a reason for shared custody. The stability of parental relationships is a great deal more important than contact with material things.

Americans have always assumed that parents share decision-making authority because only parents can determine what is in the best interest of their own children. As recently as 2000, the Supreme Court in Troxel v. Granville reaffirmed this principle and rejected the argument that a judge could supersede a fit parent's judgment about his child's "best interest."

Nevertheless, in what Stephen Baskerville calls a "silent revolution," millions of divorced parents have had their fundamental right to decide what is in the best interest of their own children taken away and given instead to a vast array of government officials and so-called "experts" such as judges, lawyers, psychologists, psychiatrists, social workers, child protective services, child support enforcement agents, mediators, counselors, parenting classes, and feminist groups.

This shift began in the 1970s after the spread of unilateral divorce was followed by the creation of a giant federal child support-enforcement bureaucracy. The notion that this mix of government officials and government-appointed advisers can dictate what is the best interest of the child rather than a child's own parents is how liberals and feminists are fulfilling their goal that "it takes a village (i.e., the government) to raise a child."

An example of the bias against fathers can be seen in the Responsible Fatherhood Act of 2007 recently introduced by Sens. Barack Obama, D-Ill., and Evan Bayh, D-Ind. The bill mentions "child support" 65 times, but not once does it mention parenting time, custody, visitation, or access denial.

Baskerville's new book, "Taken into Custody: The War Against Fatherhood, Marriage, and the Family" (Cumberland House, $24.95), provides a copiously documented description of society's injustices to children who have been deprived of their fathers and of fathers who have been deprived of their children. This book is a tremendous and much-needed report on how family courts and government policies are harming children.

It is a breakthrough for shared parenting that a noncustodial father, Robert Pedersen, was recently named runner-up in the nationwide Best Life Magazine's "Hero Dad" Contest. Pedersen is only allowed 6 to 8 days a month with his two children from a previous marriage.

Pedersen has devised a novel way to demonstrate the importance of fathers to children of divorced parents. He is leading an "Equal Parenting Bike Ride" starting in Lansing, Mich., on Aug. 11 and culminating with an Aug. 18 rally in Washington, D.C.