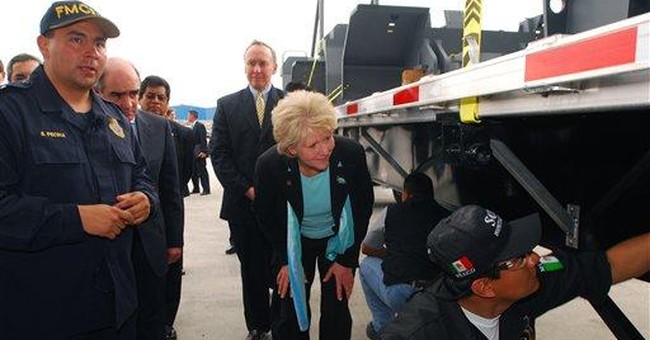 Our federal and state highways and bridges are among America's great assets; they enable us to drive freely and safely all over the country, and they belong to all of us, paid for by our taxes. But they are expensive assets; they require maintenance, repair and expansion due to rising population and traffic.

Anyone who does much driving on our highways in ordinary sedans knows how crowded with big trucks the highways already are. President George W. Bush's latest concession to Mexico is to allow Mexican trucks for the first time to have open access to all our highways, roads and bridges.

It is painful to note that the Bush administration is less protective of U.S. interests than the late, unlamented administration of former president Bill Clinton. To his credit, Clinton kept Mexican trucks off U.S. highways except for a 25-mile commercial zone immediately north of the border.

U.S. Transportation Secretary Mary E. Peters went to El Paso, Texas, to announce that for the first time, starting in April, 100 Mexican trucking companies will be allowed to make deliveries anywhere in the United States, and she put no limit on the number of trucks the 100 companies can operate. This is a major step toward Bush's vision of a North American community.

To find out why the Bush administration ignores the comfort and safety of ordinary U.S. drivers, just follow the money. Big corporations are eager to have their made-in-Mexico-by-cheap-labor products delivered in the United States by Mexican drivers, who are paid 33 to 40 percent less than U.S. truckers.

Bush will never face the voters again, but other Republicans will pay the price for his coziness toward Mexico and his elitist disregard for American workers. Even the Wall Street Journal, an enthusiastic supporter of the movement of goods, services and people, legal or illegal, across the U.S.-Mexico border, admits that rising public opinion against the importation of cheap labor "helped propel Democrats to take back Congress in November."

The jobs issue will be even bigger in 2008, and the cost to Republicans even more damaging.

The problem is not only the increased wear and tear on American highways that U.S. taxpayers will subsidize, and not even the crowding of the roads that will make driving less pleasant for us all, but it's worry about safety. That concern is real, even if you don't buy Teamsters President Jim Hoffa's statement, "They are playing a game of Russian roulette on American's highways." Homeland Security Secretary Michael Chertoff assures us he is "committed to retaining a high level of security and safety standards under this program." But we are entitled to disbelieve his promise; Michael Chertoff is impudently repudiating Congress's Secure Fence Act and the president's much photographed pre-election signing of the Act.

Maybe Chertoff will give us "virtual" safety standards like the "virtual fence" he sometimes talks about. At the present time, only about 2 percent of trucks coming across the border are inspected, so drug dealers consider it a cost of doing business that a few of their illegal loads will be caught.

U.S. truck drivers must meet strict requirements that include enforcement of hours, regular physicals, age limits, and drug and alcohol tests. We have no way of telling how many hours Mexican truck drivers have been on the road before they reach our border inspectors.

Mexico has no limits on how many hours a driver can drive a truck, and no credible drug testing of drivers. The Mexican trucking industry, with few exceptions, has never successfully been monitored, much less supervised. National Transportation Safety Board member Deborah A.P. Hersman doubts that we have the personnel to take on the additional work of sending inspectors to Mexico. She says we already lack enough inspectors to conduct safety reviews of at-risk domestic carriers.

Over the last several years, there have been many fatal accidents caused by cars and trucks driven by Mexicans, legal and illegal. The most tragic and costly truck accident in Midwest history, resulting in the incineration of Rev. Scott Willis' six children in 1994, was caused by a Mexican truck driver's inability to comprehend warnings in the English language.

Secretary Peters claims Mexican drivers will be able to understand English, but we are entitled to doubt Bush's enforcement of the English-language regulation. Mexican drivers unfamiliar with our roads and signage, plus language incompatibility, are a danger to all driving Americans.