The First Ladies - A Life or Death Decision 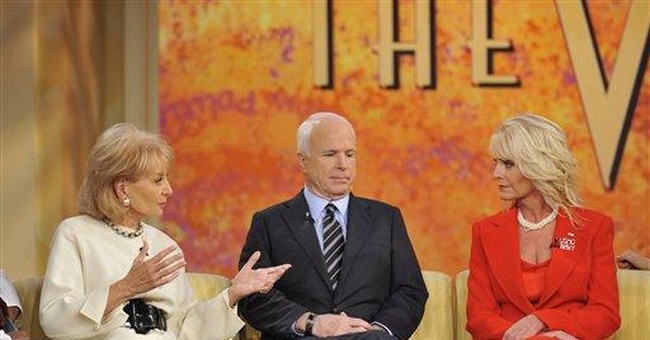 This is a stunning election season that is ablaze with drama. Regardless of what happens in November, we will either have the First Black President or the First Woman Vice President. It is also a stunning season of contrasts.

On the one hand, we have a true American War Hero. John McCain was tortured, maimed, and kept in a virtual box by a ruthless enemy. He suffered for years, refusing special treatment that would place him ahead of fellow prisoners of war. He came out of this experience a physically broken man, but with an enormous gratitude and devotion to his country.

On the other hand, we have an educated, polished, talented orator. A man who has proven to be unaccountable as a state legislator, voting “present” rather than yes or no on nearly a hundred controversial issues. As Newt Gingrich put it so eloquently, this is a man who has really done nothing but talk and write.

If the differences in Presidential candidates were not enough, we have two potential first ladies that offer stunning contrasts as well. They hold no constitutional power, but there is no doubt that the “better half” dynamic has a significant influence on the man who stands at the Bully Pulpit.

On the one hand, we have Cindy McCain. She is a lovely woman, educated with a Masters degree in Special Education from USC. She comes from a hard-earned family legacy that has left her with a good fortune; a resource she manages with a servant’s heart, sharing large sums for the benefit of those who are in need.

Cindy McCain is deeply concerned for the plight of children, especially in parts of the world where circumstances are desperate, and where life hangs by a slender thread. She even brought two of them home, one to adopt as her own and the other by close friends. Cindy’s views on abortion are not perfect in my opinion, but at least she limits her tolerance to cases of rape and incest. I hope that she and others will see that rape and incest are not crimes that should condemn an innocent child to death.

On the other hand, we have Michelle Obama. She is also a lovely woman and a Harvard educated lawyer. She comes from a regular middle-class family. Although she has mothered two children, her affection for children ends apparently at the birth canal. Michelle campaigned hard to fight the ban on partial birth abortion procedures and is a fervent advocate for abortion rights.

Michelle Obama advises and is proud of her husband and the causes he champions. One such cause was his opposition to the passage in Illinois of the “Born Alive Infant Protection Act”. Babies who somehow managed to survive abortion procedures were simply left to die alone, cold, and unloved with no medical attention whatsoever. Mind you, these are not quivering blobs of tissue, but are human children who are essentially killed by intention after they have been born.

Thankfully, the “Born Alive Infant Protection Act” was passed by the U.S. Senate in 2002, but I dare say that such may be at risk for reversal if Barack and Michelle have any say in the matter.

Michelle Obama seems to believe that parenthood is a “sacred” matter, having said this about Barack… “He’ll protect a woman’s freedom of choice, because government should have no say in whether or when a woman embraces the sacred responsibility of parenthood.”

Infanticide and the word sacred, gathered together in the same thought strikes me as bizarre and repulsive.

I am not certain why Barack Obama has such a callous view of infant death. Perhaps, it is a genetic holdover from the culture of his father’s Kenyan goat-herding legacy. I suppose defective baby goats were routinely cast onto the rocks and left to die. That way, only the best qualified would grow to become members of the goat-herd community.

We have seen such an attitude before in history, regarding who is deemed worthy to live. It seems to me that this election season is a moment in time that will define us beyond the norm. This election decision is all about life and death in so many ways. Please, listen to that little voice so often ignored, and choose wisely.