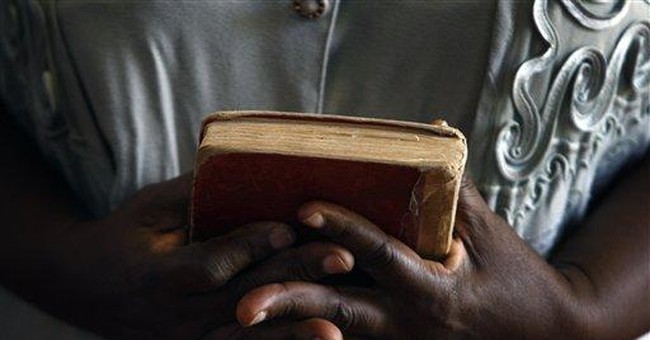 Liberals get their shorts tied into a knot very quickly when it is suggested that their faith is somehow diminished by the ideology they keep. Unfortunately, the ideology that gives liberals delusions of harmony has nothing to do with freedom, diversity, or goodness. It has everything to do with hiding the "Light" under the bushel basket, so that the darkness may flourish unhindered. Whether they are conscious of this or not varies from liberal to liberal, but the destination is the same regardless.

The Lawyer/Radio/Television personality Larry Elder brought this to my attention this afternoon on his FoxNews program called Showdown. He was interviewing the Ohio teacher that has been in the news after refusing to remove his Bible from his desk. John Freshwater's Bible has been on his desk for the last 21 years, so he drew the line in the sand when the school board demanded that he hide it.

Of course, Larry followed the segment with his own diatribe on what "he" would have done, were he John Freshwater, saying if anyone expressed concern or was offended by his Bible, he would have removed it without question. That this educator did not teach lessons from the offending Bible, or wave it about over his head makes no difference to Larry. The Bible's presence on John Freshwater's desk should be of no more importance to those seeing it than should the color of John Freshwater's socks.

Such is representative of the war on Christianity, and on a more personal level, the veiled persecution of Christians in this supposed land of the free. There is no sense here, common or otherwise; rather, it is truly the making of law for the sake of the anti-Christ. It is a battle waged by those of a minority religious belief system, essentially atheist, but animated mostly in opposition to anything to do with Jesus Christ.

The water is often carried on the battle field by innumerable anti-Republican sects who care most about other issues, and those who simply could not care less. Either way, the religion of Secular Purity is emboldened as they are championed by Democrats, also known as the Party of infanticide, Caucasian guilt, and sexual gratification through non-discrimination.

The Internet is abuzz with wild speculation about who the Antichrist is. Some believe the Antichrist may be Barak Obama. Others speculate it is John McCain, and I have even read headlines that attribute the beastly title to Larry Elder. Whether you believe in a literal Antichrist that signals the end of days or not, there is without question an ongoing anti-Christ movement.

From my perspective, there is a figurehead of the dark side; a man who will, at every opportunity, grant historic advances to the culling of humanity through unfettered abortion. Given his extreme liberalism, I could see him declaring a Bible-Free Zone (as in free from Bibles) around public schools.

Can you tell that I have grown weary of Barak Obama and his plagiarized, Martin Luther King speech delivery style? How apparent is it that I often gag on my own tongue when I hear people speak about the promise of change, when nothing of the sort is evident?

Why did I feel compelled to mix rhetoric about the Antichrist with my observations of Barak Obama? Is it because I am trying to say Barak Obama is the Antichrist, without saying that Barak Obama is the Antichrist? Don't I know that we should not worry about the End-Times, or that Christ's message was one of loving our neighbors, or that the Antichrist was really Nero and was only relevant to the time of John, or that the root of evil in the world is religion of any kind? Whatever you may be thinking at this moment, if not one of the above, you may stop for a moment and realize that your underwear is all knotted up in a bunch, and if so, it may be time to take inventory of your stand.

Perhaps the Antichrist was Nero, or just a fictional boogeyman of apocalyptic literature. Maybe Barak Obama really is the dreaded dude from the Book of Revelation. For me, Barak Obama's enthusiasm for abortion makes him seem every bit the Antichrist as would Nero, who dipped Christians in tar and used them as flaming lamp posts in his garden.

The vision for change that the Democrat sees for us is one veiled in shadows. Today it is that infuriating Bible that sits on John Freshwater's desk. Tomorrow, it may be the little country church that dares to play familiar hymns on their church tower bells. Religious expression, free from government interference matters as much, if not more, than border security and the right to bear arms.

This goes beyond one's personal relationship with Christ and the forgiveness of sins as we forgive those who sin against us. It is our right to profess our faith (or lack thereof), and we should not in this country be forced to hide it any more than we should be forced to embrace it. John Freshwater should never be required to leave his "Light" at home, whether he is a teacher or a trash can maker.