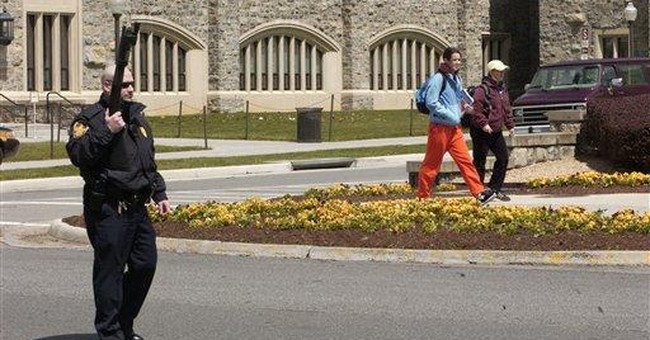 I am writing this prior to having any clue about the perpetrator, or his motives in the Virginia Tech shooting horror, but for some odd reason I feel compelled to say something. Can we adequately express our condolences to the loved ones of those killed and wounded? The short answer is that we cannot.

As a nation, these past two decades have given each of us, more than our share of opportunity to use the old adage, "There, but for the Grace of God, go I." We may offer them our empathy though, for that very reason. As more and more of these sick tragedies occur in our various communities, I think most of us have, at some level, prepared ourselves for the day when it will hit closer to home.

What is it that infects these people, and turns them into abominable monsters? They appear to have little to no sympathy for the innocent, and in this case, the killing and wounding was so widespread, that one cannot fathom any possible motive of payback for a perceived wrong. Of course, payback killing is also indefensible, but at least we can look at the process and see, at the very least, a twisted reason.

One thing is certain in the aftermath of today's sorrow. There will be blame masters oozing out of every mouse-hole, gladly lapping up camera time for whatever their agenda might be. Those who believe that guns are possessed by the devil will use today's horror as another obvious reason why America must melt down all of her guns. Others will blame violent video games and movies, claiming that this individual is but one more example of the desensitizing effects of violent entertainment.

Really, I don't have the answer, and to tell you the truth, I am not sure I know the question. It may boil down to the fact that disturbed people are influenced, just by the fact that some other disturbed person has done something similar before them. Perhaps there is one original monster in American history that is solely responsible for this ongoing string of misery. Old time journalists may have that "guy" already in their memory banks.

I am eager to see what others have to say. Not the talking heads, not the experts, but the average citizen like me, who looks up every now and then, and notices that another one of these gut-wrenching stories is on the news again. For me, aside from venting my pain through writing, I take some comfort in knowing that I can pray for the living.