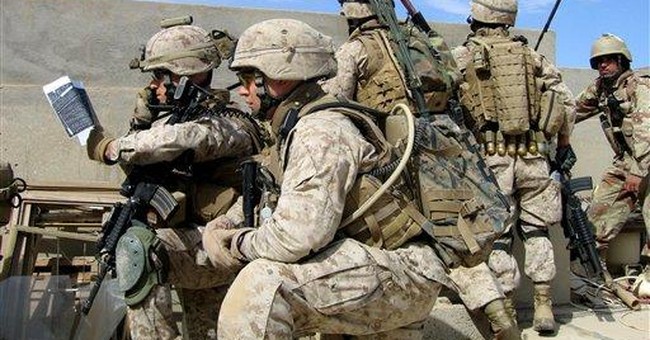 It might take a thousand Bookmobiles to transport all of the tomes that have been written on the subject of these military conflicts. Many, if not most, conclude in one way or another, that we entered those wars for misguided, arrogantly foolish reasons, and that we paid a heavy price in blood and treasure for no good reason. Many people believe that we are doing the same thing in Iraq.

Some claim to be "real" conservatives. They point to this current struggle, and issue broad condemnations against the Bush administration. They argue that we should not be in the business of nation building, and it is not our role to be the world's preeminent law enforcement entity, or the lone defender of good versus evil. The founders, they say, would never have approved of this arrogant, foolish, and self-destructive behavior.

Yet I say again, America was victorious in Korea and Vietnam, and we continue to be victorious in Iraq, not to mention Afghanistan. This is true, even though there has never been a grand ceremony on the deck of a battleship. I do believe; however, that in all of these military actions, a more deliberate and concerted effort could and perhaps should have been waged to bring the enemy to its knees, and begging for merciful dispensation.

So where was the victory?

I understand that events leading up to our involvement in the Korean and Vietnam wars were complex and that the conflicts were rooted in a broad historical context that had little or nothing to do with the United States. However, as the situations developed, these wars became focal points for the battle against the Godless, communist plague, which was hell bent on outward expansion.

There was no other force on the Planet, which could stand in its way. Following the end of World War II, the countries of Europe and the rest of the world were vulnerable to the Sirens Song of Marx's utopian daydream, not to mention the iron claw that was busy gathering spoils for the Soviet empire.

Our direct military involvement absorbed not only our blood and treasure, but also significant resources of the Soviets and the Communist Chinese. We were anything but insignificant; a worrisome presence gathered in their neighborhood.

It would have been nice to wrap these two wars up for our constituent hosts. The carnage that followed our departure ravaged the people of South Vietnam and Cambodia. This fact highlights in red, the most shameful entry on the American resume. Nevertheless, our involvement in both of these conflicts placed significant speed bumps on the communist expressway to the rest of the world. Had we not been there and paid the heavy toll, the United States might have become a lone island of freedom in the world today.

There would be no sense of security under that scenario, no matter how isolationist we became. Our victory in Korea and Vietnam was that we successfully maimed the communist beast, and gave it a significant limp. Today we see communist influences spreading in our hemisphere, but these infections are more akin to a few lunatics, using infected IV needles.

It does not help matters, when our own leftist celebra-kooks, such as Harry Belafonte and anti-war activist Cindy Sheehan, trot around and encourage them. Perhaps by standing on a stage with their arm around Venezuela's own Mister Potato Head, a.k.a. Hugo Chavez, they get a sense of having arrived. In truth, they only developed a severe case of Potato Scab disease, and they should have been quarantined by U.S. Customs agents.

Of course, that leaves us with Iraq and our continuing victory there. How can I say that we are experiencing victory, when three out of four journalists tell you that we have hopelessly lost the war? How can I declare an ongoing victory, when political opportunists call for surrender, and do so while blaming that decision on some vaporous demand by the American People?

This victory in Iraq is real, because winning the peace, and defending a schizophrenic fledgling government in that country is secondary to what we are accomplishing there. I am not saying that a stable, pseudo-democratic government is not a worthy goal, and I resist any suggestion that we should abandon those who truly are grateful for our efforts, to be slaughtered in our departing shadow. We already have that shame to haunt us, and there is no rational argument, in good conscience, which could justify a repeat performance.

Sure, there is tough resistance in Iraq. There are many ambushes, bombings, shootings, and who knows what else. Radical elements are at each other's throats, and they are tearing at ours. Radical Islamic elements have been pouring into the country, aiding and participating in the battle against the Jew loving Americans.

We are suffering casualties, as happens in warfare. In addition to the blood of our sons and daughters, we are also spending enormous sums. Nevertheless, I say to you, that we are, have been, and continue to be victorious. Islamic forces are focused on Iraq and Afghanistan, and the fact that these lunatics are spending there own blood and treasure there, means that they cannot spend that capital attacking us here. Can you imagine what they could have accomplished by now, if they were not engaged in a war with the "great Satan?"

We have not been on any egotistical military adventures in these wars, and especially not in Iraq. We are engaged in a very real defensive action, and the longer it goes on over there, the better off we are over here. It would be better for the local elements if we could simply take a deep breath and finish the job with the sterile conscience of pure military force, and perhaps at some point that should be the finishing touch.

You see, this is definitely a war of attrition. We are a great, strong nation. A super power in the world, both militarily and economically. The terrorist lunatics simply are not, and as long as they are engaging our troops in Iraq, they are unable to engage our homeland to any significant degree. So no matter how long we are there, the fact remains that we have placed a significant speed bump in the radical Islamic expressway, just as we did to the communists in Korea and Vietnam.

The homicidal lunatics may get a few licks in here and there, but the most important fact remains, that they are unable to accomplish what they otherwise would be capable of accomplishing. In addition, we engaged them in a nation that was a hotbed for trouble anyway. Two birds for the price of one stone, is not a bad deal.