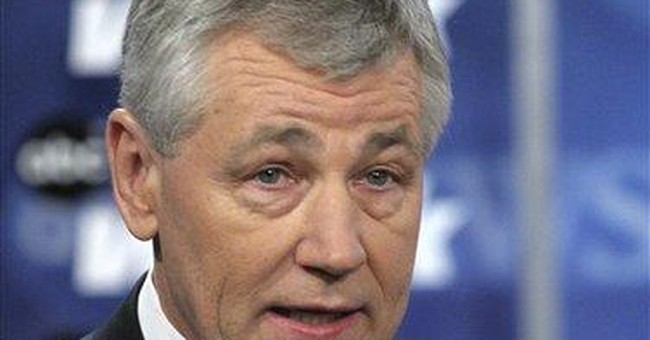 I hate writing about Senator Hagel of Nebraska. This man is one-half of the State's voice in the U.S. Senate, and he cannot decide if he is a Republican or a Democrat on critical national issues. Does this mean that he is independent and thus, his is a voice for which we should be grateful?

The distinction is, in fact, very important. By electing our Senators and Representatives, citizens are given a voice in the Federal government. That citizen voice belongs in Congress, not in the office of the President, except for the opportunity every four years, when we can speak on the subject of who should occupy the office.

Senator Hagel is unable to decide if we should carry a big stick or simply lie down and play dead. Senator Hagel does not seem to know, if he wants to be President, is the President, or if we simply do not need a strong President after all.

The following is a snip from an AP news story that I read on the FoxNews website, and it has once again forced me to write about my least favorite subject on earth.

GOP Sen. Chuck Hagel of Nebraska, a member of the Senate Foreign Relations Committee and a frequent critic of the war, stopped short of calling for Bush's impeachment. But he made clear that some lawmakers viewed that as an option should Bush choose to push ahead despite public sentiment against the war.

"Any president who says, I don't care, or I will not respond to what the people of this country are saying about Iraq or anything else, or I don't care what the Congress does, I am going to proceed — if a president really believes that, then there are — what I was pointing out, there are ways to deal with that," said Hagel, who is considering a 2008 presidential run.

Allow me a few moments to interpret the Senator's comments. Senator Hagel believes that a President, who leads according to principles, rather than by testing the political winds with his moistened finger, is completely off the reservation. Senator Hagel believes that if a sitting President insists that his policy or decision is correct, even though that decision or policy differs significantly with the slobbery spin from the opposition party, the ultimate course of action is to impeach the man.

Perhaps our founders put too much emphasis on the office of President. It seems that Senator Hagel believes that we only need a good listener in the post. Someone who can present the will of the people, as interpreted by major news organizations and their "neutral" journalists. The ideal President should then puff it all up by making flowery speeches, free from tangled tongue and mangled pronunciations.

This perpetual state of confusion reminds me of those who are unsure of their gender identity, and no, I am not saying that the Senator is confused about his gender. What I am saying, is that to know the proper and fundamental roles of the divisions of power in government, and the maximum volume constitutionally given to each voice in the House and Senate, is as fundamental in this country as is ones own gender. In any case, at the very least, I am left with more questions than answers.

Is it okay to wonder why this man finds it necessary to do the bidding of his opposing Party? Should I find it strange, that a Republican Senator buys the twisted logic and contrived calamities, espoused by lunatic fringe groups and championed by the Democratic leadership in Washington? What is it that has fostered such contempt for this President, when by and large; this President has demonstrated qualities of leadership that have been notably lacking from many of his predecessors?

Do I have questions about Senator Hagel's concept of the office of President? No, not really. You see, I believe that Senator Hagel should be placed under a restraining order by a court of law, and that he should not come anywhere near the campaign for President. Just the idea that he might entertain the thought to run for President, puts him far too close to the office.

The idea that a President might rightfully see to the firing of one or all of the U.S. Attorneys, as was done by former President Clinton, seems to be outside of the realm of understanding for many in the Senate. The notion that the President is the one and only Commander-in-Chief of our armed forces is beyond them as well. That once begun, a war is conducted to its conclusion by that man, and by that man alone. The idea that the office of President is by design a powerful position, and that individual Senators are at best, not even one one-hundredth as powerful, seems beyond the ability of most Democrats and the Republican Senator Hagel to fathom.

Most often, when I find it necessary to rail on Senator Hagel because of something he has said, I am deluged with liberal commentary, thanking God or god as the case may be, that the Senator is not a mindless robotic stooge of Karl Rove and Dick Cheney. No one is asking Senators to take daily marching orders from their Party leaders. Nevertheless, it is not too much to ask that elected officials who wear an 'R' around their necks, should not take their daily marching orders from the likes of Cindy Sheehan, Barbara Streisand, or Hollering Howard Dean.

I have no doubt that Senator Hagel is a fine man, and that in his heart of hearts, he believes that he is doing the right thing. Unfortunately, this is where he is confused. I wish that Nebraska could offer one of her sons to serve as President. Despite that proud and noble aspiration, I really must ask that great balls of fire should rain down on my head, if this is the best we can offer.