Mittens made from kittens 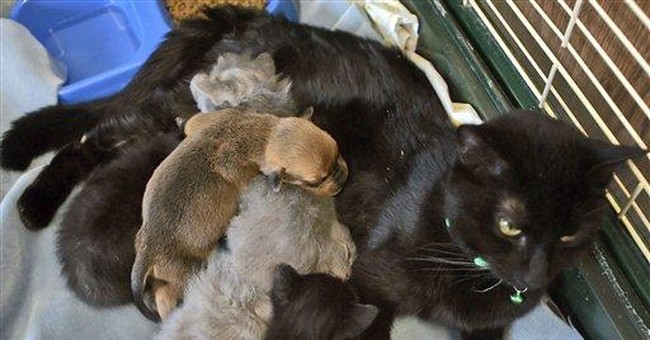 Hold on now… put down the pitchforks. I like cats, and most of them seem to like me back. I like dogs and other animals too; at least the ones that don’t view me as dinner. Bugs are a different matter. One bug looks vicious, but he only crawls up your arm because you are in the way. Another one looks perfectly innocent as it prepares to bite you and turn your flesh into a black puddle of festering goo.

What I think about cats, dogs, and bugs really has nothing to do with my topic, but then, you have no clue what the topic is at this point. I just wanted to give you a moment to calm down. Certainly, a few cat lovers blew a retinal blood vessel or two after reading the headline, which brings me conveniently back to the actual topic.

Ann Coulter, some would say, pulled a real “boner” when she used the word “faggot” during a recent speech. She defended the use of the word as being an obvious sophomoric slam directed toward presidential candidate, John Edwards. Her intention, she said, was to convey the notion that he is a wimp.

Wow... I typed three things in the above paragraph, all of which makes my skin feel squirmy and exposed. Perhaps my sophomoric lack of sophistication is to blame, but I simply cannot get used to the word boner as a word that should be used in polite company.

I doubt that I have ever called anyone a faggot, and I am almost as certain that I have never written anything where the word was needed. Of course, the third item in the aforementioned paragraph should make everyone’s skin crawl. The name John Edwards ought to give you the shivers. If it doesn’t, well, I guess you give me the shivers too.

The first time I ever heard the word boner used to describe an error, was in a tenth-grade English class. Our teacher was an adorable old woman who had been everyone’s English teacher since the end of the Second World War. If memory serves, a fellow classmate was recounting an embarrassing event. The teacher laughed with the rest of us, and punctuated the moment by saying, “Oh dear, you pulled a real boner, didn’t you?”

There was a look of utter shock on every teenage face in that room. Had she stripped off her dress and danced go-go style on her wooden desk, the flush on our pimpled faces would have been no less obvious. I’m confident that she followed up by defining the term for us, but the trauma of the moment clouds my memory to this day.

It is amazing how our language ebbs and flows with the passage of time, and the shifting sands of the cultural landscape. The mere utterance of words, which once were used in friendly conversation between neighbors, can in the blink of an eye or the passing of a decade, become career ending lapses in judgment.

As we look back on our nation’s brief history, especially the social landscape of the colonial days, the contrast with life today could not be more striking. In those days, a man who spoke disrespectfully of the church might find himself spending a frosty night in the stockades. Today, a man who would dare to utter a prayer in an inappropriate public setting may find himself suspended without pay, or on the pointy end of a lawsuit.

It is my opinion that we are now 180 degrees out of sync with common sense. There is a force at work in society, which has pulled us down the wrong fork of the river. We have an upside-down version of social conscience today. Forty million children have been slaughtered in the name of compassion for women, while tears are shed for the suffering chickens, destined for our dinner plates.

That force is liberalism, and it has been at work for many years now, nibbling away at the conservative bedrock on which this nation was built. It is not the liberalism one finds in the dictionary, that professes a noble ambition for the good of mankind. This liberalism is the perversion of the social wellbeing. It is the rot, which turns the milk sour.

Whatever nobility once adorned the liberal mentality has long been lost to the blind pursuit of desire. It is the manifestation of hedonism under the guise of social justice and personal rights.

Political correctness that has run amok is a symptom of the disease that festers in our communities, our universities, and our governmental institutions. The PC phenomenon is the secular morality that has risen to replace the morality of the church, which used to guide the social conscience. Liberalism has taken that old morality, and has pitched it into the dumpster with distasteful words like faggot, and the dreaded ‘N’ word.

If you have read this far, and believe that my purpose is to defend the use of derogatory words then you have missed the point altogether. Mittens made from kittens, perhaps, should remain your focus after all.