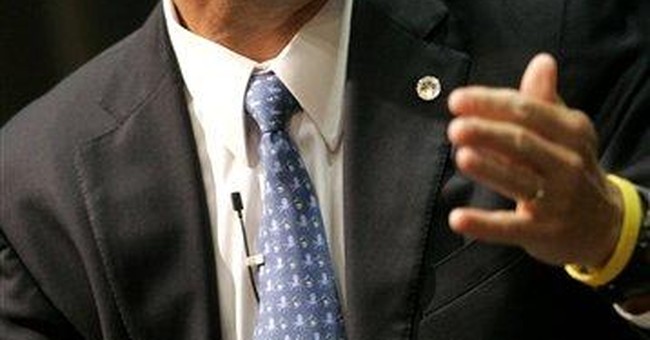 Matt Drudge has posted this headline on his site: "Editor For SC Largest Paper: Edwards Is 'A Big Phony.'" That claim may qualify as the understatement of the political year. John Edwards has gone from what U.S. News & World Report describes as "the happy-face centrist" to the Candidate from the World of Kos. Has any '08 candidate traveled so far (to the left), so fast, and in such a transparently false manner?

There are the predictable flip-flops. Today Edwards says the Iraq war was a mistake; in 2002, he insisted that "Saddam Hussein's regime represents a grave threat to America and our allies. . . . [W]e must be prepared to use force, if necessary, to disarm Saddam Hussein, and eliminate Iraq's weapons of mass destruction once and for all."

Having been an early supporter of the war on terror, he now refers to it as a "bumper sticker." John Edwards is now a passionate critic of NAFTA-after having had nice words to say about it just a few years ago. Once upon a time he expressed concern about government spending; today, he is a champion of it. He raged against "shameful lending practices" that are "devastating communities"-and then we found out he was employed in a firm that engaged in predatory lending practices. The multi-millionaire owner of a 28,000-square-foot home targets the rich in his speeches. On and on it goes.

Edwards is also leading the campaign against Fox News. He was among the first Democratic candidates to refuse to take part in Fox-sponsored debates, prompting this withering reply from Roger Ailes: "The candidates that can't face Fox, can't face al Qaeda."

And sometimes what reveals the most about a candidate is not his stance on issues, but how he acts. John Edwards's actions range from the funny (the high-priced haircuts and this widely-mocked video of the candidate's carefully attending to his hair) to the disturbing. For instance, according to the political consultant Bob Shrum, during the 2004 campaign Edwards told Kerry a highly personal story about his son's death. Edwards said it was a story about which he had told very few people. In Shrum's account, Edwards told Kerry "that after his son Wade had been killed, he climbed onto the slab at the funeral home, laid there and hugged his body...." Shrum says Kerry was "queasy" because Senator Edwards had recounted that story before, in almost the same language.

This story, by itself, is unsettling. In the context of the Makeover of John Edwards, it is unnerving. One senses that Edwards is unanchored philosophically, that he is thirsting for political power and willing to remake himself in order to gain it.

He is Bill Clinton without the interns.