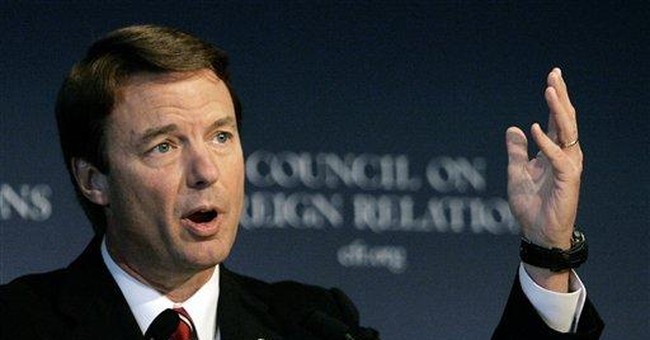 In a major foreign policy speech to the Council on Foreign Relations today, former Senator John Edwards said this:

"The core of this presidency has been a political doctrine that George Bush calls the 'Global War on Terror.' He has used this doctrine like a sledgehammer to justify the worst abuses and biggest mistakes of his administration... The war on terror is a slogan designed only for politics, not a strategy to make America safe. It's a bumper sticker, not a plan. It has damaged our alliances and weakened our standing in the world... The 'war' metaphor has also failed because it exaggerates the role of only one instrument of American power—the military... we must move beyond the idea of a war on terror." Click here to go to Edwards's speech

That would be one way to look at it. There are others.

Another view goes something like this: The global war on terror is not a "political doctrine" advanced by the Bush Administration or a bumper sticker slogan. Rather, it refers to an epic struggle we are engaged in against Islamic jihadists. These jihadists -- years before George W. Bush became president and years before Operation Iraqi Freedom -- publicly announced, through their fatwas, that they were at war against us.

Throughout the 1980s and 1990s, terrorists struck against us by bombing Marine barracks, the World Trade Center, American embassies in Africa, and the U.S.S. Cole. And then, after years of lassitude and indifference, came a day of flames and ashes, of bent steel and fallen buildings, of wrecked planes and thousands and thousands of dead bodies, of grief that has not yet receded and memories of loved ones that will not pass.

In response to the attacks of September 11, 2001, the United States went on a war footing. In the words of President Bush:

"On September the 11th, enemies of freedom committed an act of war against our country. Americans have known wars -- but for the past 136 years, they have been wars on foreign soil, except for one Sunday in 1941. Americans have known the casualties of war -- but not at the center of a great city on a peaceful morning. Americans have known surprise attacks -- but never before on thousands of civilians. All of this was brought upon us in a single day -- and night fell on a different world, a world where freedom itself is under attack."

So the idea that the global war on terror arose from something other than an attack of deliberate and massive cruelty against the United States is fiction. And the notion that we have not witnessed success is self-evidently false. Consider only one fact: we have not experienced a single attack on the American homeland in more than a half-decade -- which is something hardly anyone would have predicted in the days immediately after 9/11. Such things don't happen by accident; they are the result of a persistent, relentless, focused, and successful effort to break up terrorist cells, to arrest jihadists, and to deliver massive blows against terrorist networks and hideouts and nations that harbor them.

It is quite clear in Senator Edwards's speech that he is deeply uncomfortable with the notion that we are at war and that we need to use the instruments of war to prevail. Of course the military alone is not sufficient to the task; that is why the United States has worked hard to gain unprecedented cooperation in the war on terror from countries such as Pakistan, Saudi Arabia and Indonesia.

Traditional allies in Europe have helped in tracking and arresting terrorists and blocking their financing. We’re witnessing unprecedented cooperation in law enforcement, intelligence, and diplomacy. And more than 70 countries now have joined the Proliferation Security Initiative (PSI), sharing intelligence information, tracking suspect international cargo, and conducting joint military exercises to stop all aspects of the proliferation trade and to deny terrorists, rogue states, and their supplier networks access to WMD-related materials and delivery systems.

For the Edwards thesis to have merit, he would have to rewrite most of the history of the past five-and-a-half years. He would have to erase virtually all of the day-to-day activity of the war on terror, which as a practical matter consists of unprecedented levels of cooperation and integrated planning across scores of countries, both long-time allies and new partners. But Senator Edwards seems quite willing to engage in that kind of revisionism.

At the same time, it is deeply unwise, and quite dangerous, to underplay the role of the military when facing an enemy that is ruthless, cunning, and merciless. To argue that we are engaged in a metaphorical war when our enemy is engaged in a real one is an invitation to disaster and defeat.

Islamic jihadists have shown, in their words and deeds, that they want to kill Americans and destroy secularism and pluralism in the Muslim world. They have embraced a culture of death -- and they intend to make us a part of it. And yet it appears that some in our nation, and others in the Western world, do not fully grasp the nature of the enemy and all that lies in the balance. They do not, deep in their bones, believe we are at war. And at too many opportunities along the way, they are taking steps that impede (even unknowingly) our efforts to wage and win the war against militant Islam.

Senator Edwards also says we need to "reengage the world with the full weight of our moral leadership." What Senator Edwards doesn't tell us is how his desire to precipitiously and immediately withdraw from Iraq, after having voted in favor of war with Iraq[1][1], would demonstrate "moral leadership." How would the genocide and rivers of blood that would follow an American retreat, to say nothing of granting an unprecedented victory to Islamic jihadists and betraying those who have stood with America and for liberty, advance the moral good?

Senator Edwards says a lot in his speech -- but one thing he fails to say is perhaps as revealing as anything else. In a speech of more than 5,200 words, he can barely bring himself to say a single critical thing about the terrorists that attacked our nation, killed thousands of our citizens, and who are waging war against us even now, in Iraq and across the globe. One might think that John Edwards could muster considerable moral outrage against al Qaeda and its deadly acts -- but one would be wrong.

It makes one wonder if Senator Edwards takes seriously the words and deeds of Osama bin Laden, Ayman al Zawahiri, the late Abu Musab al-Zarqawi, and so many others? Does he understand that they, not America, are responsible for killing American soldiers and innocent Iraqis and attempting to turn Iraq into a terrorist base? Does he grasp the fact that they want to impose a caliphate that spans from Spain to Indonesia? Has he seen the videos that show innocent people having their heads sliced off by jihadists, with joyful shouts of "Allah Akbar" accompanying the slayings? You wouldn't know these things, at least based on Senator Edwards's Council on Foreign Relations address.

We are in a race with terrorists who have declared war on America. That race will have one of two outcomes: either we will defeat them, or they will kill many, many more of us. I'm grateful our commander-in-chief is committed to hunting down and destroying these jackals, who are at once savage, malignant, remorseless, and determined. We have prevailed against their kind before; we will do so again. But only because of leaders who understand the gravity of the threat and the stakes of the struggle.