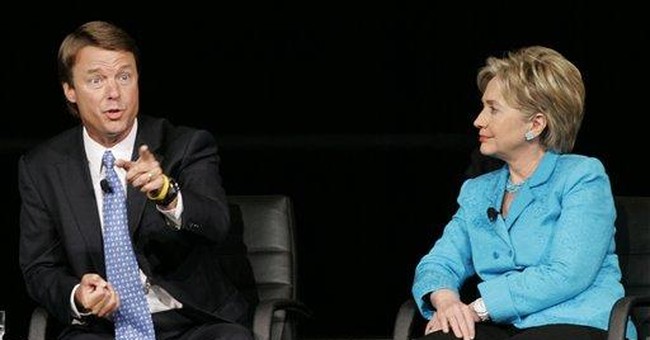 When it comes to the economy, no one likes bad news—no one, that is, except for liberal politicians. Why? Because liberals rely on bad news to sell their policies of choice. In fact, their whole approach to the economy is almost entirely predicated on it. From health care to social security to global warming, their number one tactic is to appeal to anxiety, fear, and worry. It's in their political interests to convince the public that things are bad, very bad—and probably going to get worse.

As a result, listening to the leaders of the Left talk about the economy is like going on a ghost tour down a darkened hall filled with all manner economic ghouls and fiendish financial frights. But like all haunted mansions, it's just an elaborate act rigged to make you tremble. When you turn on the lights, there's little to see—and nothing to be afraid of.

So it's no surprise, then, that, over the summer, liberals have amped up the doom-and-gloom scare rhetoric, always with the hope that no one will turn on the lights to see what's really going on after they say "boo!"

Much of the talk has come from the Democratic presidential contenders. Hillary Clinton has recently been blessed with some good press as the "responsible" Democrat, but even she's willing to play with the facts when it suits her. At an August 7th debate between the Democratic presidential contenders sponsored by AFL-CIO, a federation of labor unions, Clinton went after President Bush, slamming him for a "rising deficit." The only problem is that, far from rising, the deficit is down by about 50% since 2004, and some experts think it might even be gone by the time Bush leaves office. Whoops!

Trying to catalog all the economic fear-mongering of John Edwards would almost certainly prove futile: He just churns the stuff out too fast. But lately, he's taken up the torch in the rally against free trade, proclaiming that "globalization has helped stunt the growth in wages for American workers," and warning about the evils of NAFTA and the WTO.

But free-trade is, most economists agree, a source of substantial wealth for Americans, not a harbinger of economic doom. Federal Reserve Board figures show that U.S. factory output has increased by almost 50% since the creation of NAFTA and the WTO. In the first ten years of NAFTA, trade between the U.S. and Mexico nearly tripled, increasing by more than $150 billion. But talking about numbers like these won't win you points with the country's populists. Thus, Edwards soldiers on in the name of "the worker"—and, if he gets his way, at the expense of the U.S. economy.

Angry populism is a tempting act these days, and even Barack Obama, despite his reputation for playing nice, has gotten into the game. He recently wrote an op-ed charging some lenders with being "criminals," saying that they "hoodwink low-income borrowers." But in the midst of all the accusations and name-calling, he forgot to include one important detail—naming what crime, exactly, had allegedly been committed. All he offered was the simple presumption of guilt, no further explanation needed. But why worry about such quibbles? In the world of liberal economics, legitimate businessmen become criminals as soon as it becomes politically advantageous to say so.

But one not need be a presidential wannabe to tout loopy notions about the economy. Rep. Charlie Rangel (D., NY), always ready with a barrelful of pessimistic economic nonsense, wrote a blog entry for the Hill's website in which he claimed that "we still have higher poverty, lower wages, and… we need to change our economic course." Unfortunately, Rangel's assertions about poverty and wages are flatly untrue. After a brief dip in the wake of 9/11, incomes have been on the rise since 2002, and a recently released report from the U.S. Census Bureau shows that poverty levels declined from 2005-2006. Rising incomes and shrinking poverty? Doesn't much sound like we need to "change our economic course."

These sorts of hyped-up scare-tactics are the only way liberal leaders can justify their recent actions: gearing up for the largest tax increase in the nation's history, instituting outsized energy taxes that raise prices at the pump, trying to force taxpayers to cough up for government-funded medical care for the middle class. Ronald Reagan once said that "government always finds a need for whatever money it gets." And as long as there are liberals in office, you can count on it to keep on trying to scare you into giving it more.