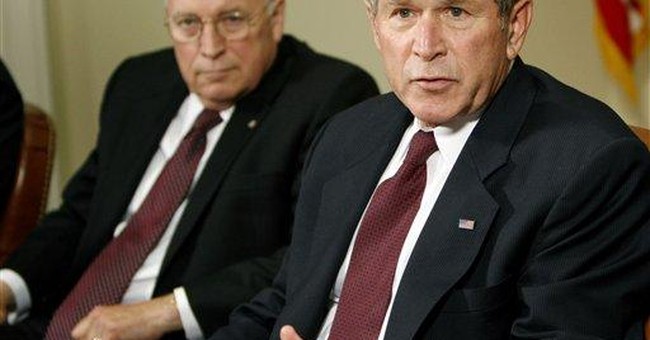 For the most part ABC News anchor Charles Gibson's interview with Governor Sarah Palin was fair. As expected, Gibson included a "gotcha" question. He asked her what she thought of the "Bush Doctrine." Clearly she did not have a ready answer. Later he told her that the Bush Doctrine was the presumption that if we know a country is preparing to attack, the USA has the right to a preemptive strike. She gave a general reply that the United States has a right to its own defense and must do whatever intelligence suggests.

The next day liberals and even some conservatives pronounced that Palin's answer was proof that she was not ready to be President. Because of McCain's age this has become a live issue and may be taking a bit of the bloom off the rose.

Can we really blame her for being confused? There are several pronouncements which have been termed the Bush Doctrine. This was spelled out by Michael Abramowitz in a front page article in the Washington Post on September 13. He quotes Peter D. Feaver, who worked on the Bush National Security Council Staff, as saying there are at least seven Bush pronouncements which have been called the Bush Doctrine. This immediately became a hot issue on the political blogs. Liberals said her answer demonstrated her thin grasp of foreign policy. Conservatives, said Abramowitz, said she handled the question well by asking Gibson to clarify what he meant by the Bush Doctrine. Liberal journalist James Fallows charged that Pallin did not recognize the Bush name and this, he said, demonstrated "a lack of attention to any foreign-policy discussions whatsoever in the last seven years."

Her replies regarding Russia and Georgia indicated that statement was somewhat exaggerated. The existence of the Bush Doctrine, or many Bush doctrines, was disputed by Philip D. Zelikow, who was State Department Counselor under Secretary of State Condoleezza Rice.

He told the Post, "I believe the assertion that there is such a doctrine lends greater coherence to the Administration's policies than they deserve."

President Jimmy Carter's National Security Advisor, Zbigniew Brzezinski, said there was no single piece of paper which represented the Bush Doctrine, that several ideas collectively represent the Bush Doctrine. If he isn't sure it is not surprising that Governor Palin doesn't know. Dana Perino, the President's Press Secretary, said the Bush Doctrine deals primarily with the War on Terror. She laid out three elements of the Doctrine: 1) The United States does not distinguish between those who commit acts of terror and those who harbor and support the terrorists; 2) We will confront grave threats before they fully materialize and will fight the terrorists abroad so we don't have to face them at home; and 3) We will counter the hateful ideology of the terrorists by promoting the hopeful alternative to human freedom. So she gave an answer that none of the foreign policy experts gave.

Stephen E. Biegun now serves as Governor Palin's foreign policy advisor. He helped to draft the original Bush Doctrine statement in 2002 articulated by Gibson. So presumably next time Palin is asked the question she will have a ready answer - unless, of course, she decides to go with one of the other six definitions of the Bush Doctrine.