A Tribute to Alexander Solzhenitsyn 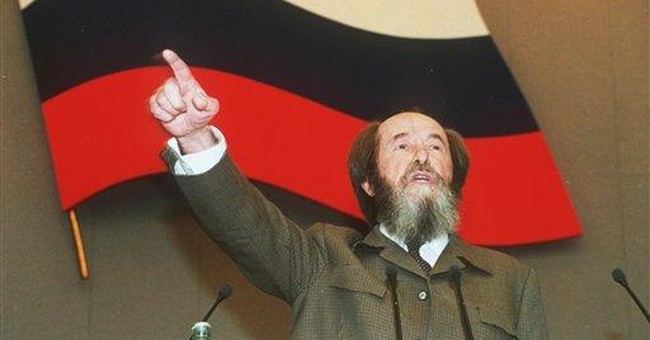 This year will go down in history as one in which great fighters for freedom have been called home by the good Lord. And so we bid farewell to the most important freedom fighter of the 20th Century, Alexander Solzhenitsyn, who passed away Sunday at the age of 89.

Solzhenitsyn told the world the story of the Soviet gulags. He was in the gulag for having "criticized" Josef Stalin in a letter to a friend from the front in World War II. While in the gulag system as a political prisoner he felt he had no hope. So he determined to make a run for it, figuring that the Soviets would kill him. Just as he was about to make a break someone came along and stopped him. That someone, he said, had a warmth he had never experienced before. This man who Solzhenitsyn said he had never seen at the gulag took a stick and drew a cross in the dirt. And he left, never to be seen again. Solzhenitsyn later came to believe that that kindly figure was Christ himself. He had no idea that as he was thinking of escaping there was a worldwide effort to set him free. Shortly after that kindly gentleman prevented him from escaping, he was expelled by the Soviets, eventually to make his way to the United States.

In what was one of the most disgraceful episodes in American history President Gerald R. Ford refused to invite Solzhenitsyn to the White House. It was one of the factors which led Ronald W. Reagan to challenge Ford later that year.

One of the first people Solzhenitsyn asked to see in the United States was Senator Jesse Helms (R-NC). He said he learned when he got to the West that it was Helms and George Meany of the AFL-CIO who played the most important role in the effort to free him. He and Helms visited many times over the years. It is a remarkable coincidence that both died within a month of each other.

Solzhenitsyn settled in Vermont because it reminded him of Russia. He remained there until the Soviet Union fell, whereupon he returned to Russia, where he remained an important symbol in the fight for freedom. He had documented the repression of the Soviets based upon the information available to him in Russia. When he gained access to the records at the Hoover Institute at Stanford University, he was horrified to find that he had based his writing upon false information. So he spent all of his days in the United States feverishly rewriting his work. He completed that task shortly before he returned to his native land.

He stayed out of American politics except for one very important speech at Harvard University in which he warned the West that it was in mortal danger of disintegration if it did not maintain its principles. That speech disappointed some conservatives who accused Solzhenitsyn of defeatism. But a careful reading of that remarkable address demonstrates that it is anything but defeatist. It was prophetic.

This Nobel Peace Prize winner was perhaps the most important symbol of the struggle for freedom. In recent days he had a Russian TV show in which he propounded strange economic theories. An economist he was not. A fervent Orthodox Christian he was, and from that Church he will be commended to the Lord this week. Memory Eternal!