New York Times' Unsubstantiated Assault as a Boost to McCain 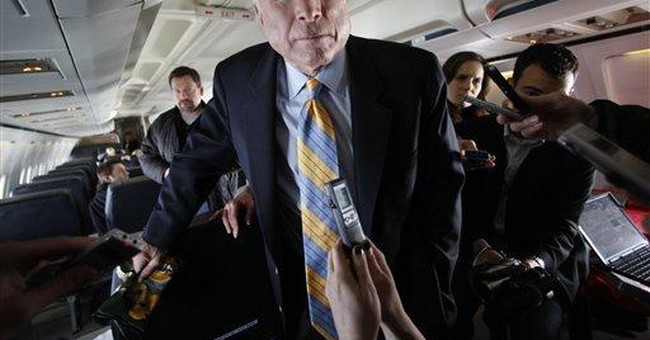 THE NEW YORK TIMES printed an unsourced piece saying that in 2000 when Senator John S. McCain, III ran for the Presidency he had what some aides supposedly regarded as a romance with a female lobbyist. McCain associates regarded the story as a hit piece. McCain himself, in denying the story, said he was disappointed in THE TIMES.

In fact, McCain can be thankful that the story first appeared in THE TIMES, which, by the way, is standing by the story but offering no persuasive supporting evidence. That is because conservatives, whom McCain needs to win in November, hate THE NEW YORK TIMES. Most don't just hate THE TIMES, they loathe that newspaper. They are disinclined to believe anything which is printed in that paper.

Dislike for the media on the part of conservatives and Republicans is nothing new. President Dwight D. Eisenhower, no conservative or partisan Republican he, was startled when, in addressing the GOP Convention more than 40 years ago, he had a throw-away line about not believing or taking direction from columnists and pundits who did not wish the Republican Party well. The Convention erupted in such spontaneity that Eisenhower almost didn't recognize what he had said.

That was nothing compared with what Senator Barry M. Goldwater said during his acceptance speech at the 1964 Republican Convention. There was a near riot when Goldwater gave it to the media. And that has been a consistent theme at Republican conventions ever since. If the nominee himself did not attack the media, someone else, perhaps a former candidate or a governor, would let the media know that media bias and agenda are not appreciated.

The question for THE NEW YORK TIMES is if it had similar information about a liberal candidate for the Presidency, would the paper print the same information without a source it could quote. A Washington, D.C. News/Talk radio station spent an hour examining the motives of THE TIMES for printing the story. The moderator took about twenty calls. Every single call proposed a different motivation for THE TIMES. Regardless of the motivation, McCain can be thankful that the story originated in THE TIMES and not in THE ARIZONA REPUBLIC or THE INDIANAOPLIS STAR. Had those papers printed the story first some people might have been inclined to believe the story. As it is, even many of McCain critics have come to his defense. And the Senator has used his fight against THE TIMES for fund-raising purposes. Given the feelings toward THE TIMES it would not be surprising if McCain reaped a huge profit from this episode.

The motto of THE TIMES is "All the News that's Fit to Print". This story clearly was not a story which was fit to print. Even Woodward and Bernstein, of THE WASHINGTON POST waited to be sure they had their stories on President Richard M. Nixon pinned down before they went to press. Editor Ben Bradley insisted upon it. Where was the Editor of THE NEW YORK TIMES asking whether this story was fit to print. Perhaps the McCain battle against THE TIMES will cause other newsroom editors to take a step backward and examine the credibility of a story the next time a similar issue arises.