Possible Consequences of the Clinton-Obama Rift 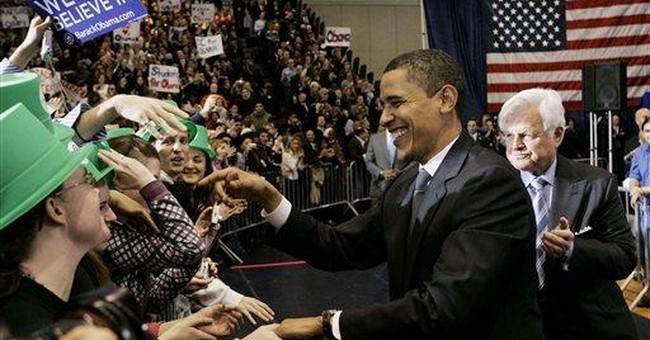 In speaking to some media friends I find them all atwitter about the supposed tension between Senators Barak Obama (D-Ill) and Hillary Rodham Clinton (D-NY) over the differences the two are showing in the debates as to who said something supposedly favorable to the Republicans. Other political friends of mine have suggested that if former Senator John Edwards (D-NC) hangs in the primaries long enough, given the proportional representation that the Democrats have nationwide, it could be that neither major candidate will end up with a majority of delegates. That is unlikely but still possible.

Both my media and political friends have suggested that in all likelihood Hillary Clinton will be the nominee and she will be unable to invite Senator Obama to be her Vice Presidential running mate because of the bitterness between them.

Oh, really? Turn the clock back to 1960. Senator John F. Kennedy (D-MA.) had won a hard fought campaign against, among others, Senator Lyndon B. Johnson (D-TX). Talk about bitterness, Kennedy and Johnson hated each other.

We know from first-hand accounts that Kennedy dispatched an associate to ask Johnson to be his running mate with the absolute certainty that Johnson would decline. Then Kennedy could select the Vice Presidential nominee he really wanted. In fact, Kennedy’s real choice was asked at the same time as was Johnson. When Kennedy’s associate came back to say that Johnson had accepted there was cursing and panic.

The bitterness between Kennedy and Johnson is off the chats compared with Clinton and Obama. True, it is early in the process and if the Clintons continue to treat Obama like a school kid needing instructions, Obama may get to the point where he has had enough and wants no part of the Clintons and actually would say no if asked.

Think about it. Obama is young. He has aroused not only young people but African Americans of all ages. He has learned to be a powerful orator. Clearly, he brings new people into the political process. Hillary would a fool not to ask Obama to be her Vice Presidential nominee. Would America be up to voting for both a woman and an African American? Why not? The voting public appears ready to repudiate eight years of Republican leadership. That being the case perhaps it probably would not matter whom the Democrats nominate, within reason. A ticket of Representative Dennis Kucinich (D-OH) and former Senator Mike Gravel (D-AK) would not be elected. All sorts of Republicans and conservatives of all kinds tell me they would consider voting for Obama were he the Democratic nominee. Obama has said just enough to attract these voters who are unfamiliar with his record.

The point is this. It is too early to write off a Clinton-Obama ticket. Now, of course if Obama should be the nominee, it is absolutely certain that Hillary would not run with him. Indeed, she probably would not even support him except nominally.