Unprecedented Danger in One of the Proposed California Ballot 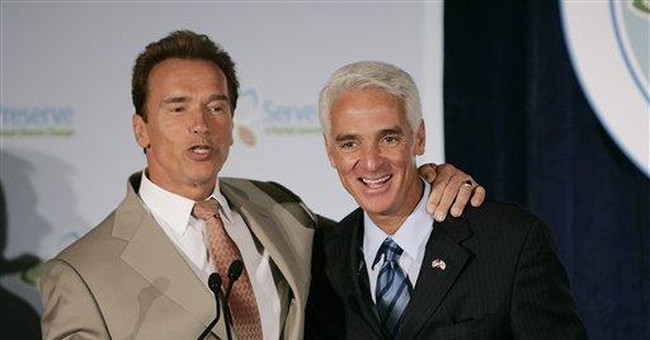 A movement is underway across the nation to change the way we elect the President. Since the bitterly contested election of 2000, in which Vice President Albert A. Gore, Jr. won the popular vote but lost the election to President George W. Bush, Democrats have been anxious to modify the way in which the President is elected. For many the goal is either to eradicate the Electoral College or make its votes insignificant to the outcome of the election.

Recently, Republicans and Democrats in California have proposed two separate ballot initiatives for the 2008 election that would alter the way California's electoral votes are distributed in the Electoral College. The Republican proposal would replace the winner-take-all system with one in which the electoral votes would be awarded by how Congressional districts vote.

Meanwhile, Democrats have introduced "The National Popular Vote for President Act." This initiative would require States to award their electoral votes to whichever candidate wins the most actual votes (i.e., popular votes) nationally. It would take effect only if States representing a majority of the Electoral College votes agreed to the change. Because of California's population and influence, there is a concentrated effort to push this initiative through next year. A Democratic consultant told the LOS ANGELES TIMES that "a lot of people who lived through the 2000 election ...feel pretty strongly that we ought to have a national popular vote. The Electoral College is a vestige of another time period." The presumption behind this statement is that if history conflicts with one's desire for power, abolish history and retain power at all costs.

But the Founders created the Electoral College because they believed it to be most prudent to protect the interests of a diverse nation. They were wary of a central government with too much power, so they established a federal system of government that limited the responsibilities of the national government and left all others to the States.

If this initiative in California and others like it across the country were to succeed our electoral system would change in two ways.

First, it would give undue influence to large urban areas at the expense of rural voters. Cities like New York City, San Francisco, Chicago and Los Angeles would have far more importance in a popular vote than they do in the Electoral College. Campaigning in Iowa and South Carolina, which currently attracts much attention, would cease because voters in those States would be of little significance to the Presidential election. Instead of representing a diverse group of Americans from across the nation, the President would represent those in large cities.

Second, it would have the potential to contradict the votes of those within the State itself. If a candidate were to win the popular vote nationwide but Californians had voted for another candidate, the votes of Californians would not go to the one for whom they had voted but to the one for whom citizens of other States had voted. So it would be possible for the voters of populous states like New York, Illinois, Texas and Florida to decide which candidate would receive California's electoral votes.

While it theoretically is possible in the Electoral College to win the Presidential election by winning the eleven most populous states [California (55 votes), Texas (34), New York (31), Florida (27) Illinois (21), Pennsylvania (21), Ohio (20), Michigan (17), Georgia (15), New Jersey (15), and North Carolina (15)] and disregard the rest of the country, no President has ever come close to achieving such a feat. The States themselves, though populous, are too diverse. Instead, candidates must campaign across the country, maintaining the Founders' original intent that Presidential candidates seek popular support over a geographical majority of the country, not in isolated urban areas.

The Founding Fathers were highly suspicious of unregulated majorities. Hence, they deliberately created the Electoral College to constrain the will of the majority and to ensure that the votes of those in less populous States were heeded. Californians should be wary of this latest attempt to enfeeble the Electoral College. Power is seductive. James Madison perceptively warned against unrestrained majority rule in Federalist # 10. "When a majority is included in a faction, the form of popular government enables it to sacrifice to its ruling passion or interest both the public good and the rights of other citizens," he wrote. "Either the existence of the same passion or interest in a majority at the same time must be prevented, or the majority, having such coexistent passion or interest, must be rendered, by their number and local situation, unable to concert and carry into effect schemes of oppression...." This is great wisdom that, in spite of its age, is applicable today.

Biden's Energy Secretary Just Admitted a Key Fact About Pipelines
Townhall
BREAKING: Liz Cheney booted from position as House GOP Conference Chair, vows to 'do everything I can to that [Trump] never again gets anywhere near the Oval Office' [video]
Twitchy
We Don't Have a President
Redstate
The Morning Briefing: Everything Is Fine—Biden Naps While World Falls Apart
PJ Media