Censorship Disguised as Reinstitution of the Fairness Doctrine 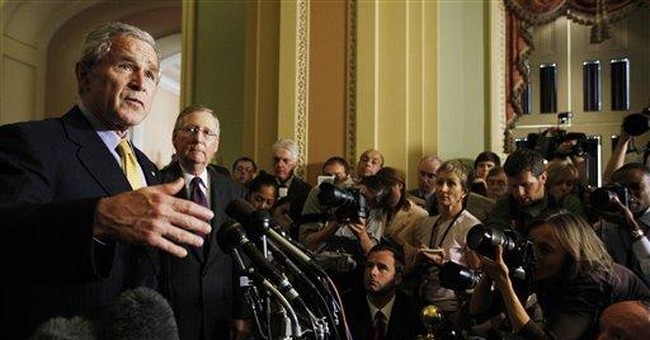 I am worried. This is not my usual state of mind but so many signs point to trouble. There are various things of concern, such as the Immigration Bill, and more obscure issues, such as the Trans-North American Highway, which may have the effect of giving up our sovereignty. I am worried about what is happening to talk-radio in this country. Hopefully it does not resemble Hugo Chavez's actions in Venezuela. If you report anything against his regime you are shut down.

The assault against talk-radio here is not quite as drastic as that of the Chavez assault. It could have the same effect. There was no talk-radio as we know it today until the Ronald W. Reagan Administration. The Federal Communications Commission (FCC) repealed the so-called Fairness Doctrine. The reason stations did not have much talk-radio was because of the Doctrine. For instance, if I appeared on a radio program and expressed strong views on a topic, someone of a different point of view could appear at the station and time would have to be made available. In fact, if there were six different points of view time would need to be made available to all of them.

The left does not like the fact that conservatives dominate talk-radio. It is no coincidence that Rush Limbaugh, king of talk-radio, began syndication in 1988. It is likely that an attempt will be made to reinstate the Fairness Doctrine this fall or winter.

Senate Minority Leader Mitch McConnell (R-KY) issued a very strong statement opposing the reinstatement of the Fairness Doctrine. I thought it was safe because in the Senate it takes 60 votes to pass anything, and with McConnell opposed, I figured the bill would be stopped dead in its tracks. But now I'm not sure. My long-time friend Trent Lott (R-MS), whom I have known since the 1960s when we were both staffers on Capitol Hill, is ticked. Lott claims that talk-radio has encouraged people to call his Congressional office on the Immigration Bill. (He claims folks don't know what is in the Bill.) Okay, Senator Lott is upset. Here is the scary part: he said he has to do something about it. Senator Lott is ranking on the Rules Committee. If Lott and his Democratic counterpart got together, they could grease the skids for reinstatement of the Fairness Doctrine. He already has Senator Lindsay O. Graham (R-SC) singing his tune. Lott is a very able vote-counter.

He might find the votes needed to invoke cloture in the Senate. A WASHINGTON POST reporter quoted Lott, "When they're with you, it's great, when they're not, it's not good." Perhaps we could set up a system to get conservative Senators' permission before talk-radio could go full tilt on an issue.

Rush Limbaugh said when he hears what he does for a living is a "problem" it may mean that Senators would be required to create their own ways to overcome them or it may mean that "We're just going to have to wipe them out."

I worry that the issue is unusual enough that the public may find it more difficult to comprehend than the Immigration Bill. Talk-radio was only beginning to tap into sentiment. President George W. Bush apparently is so annoyed with conservatives over the Immigration Bill that he might sign such a bill. After all, did he not sign McCain-Feingold?

There are two ways to re-instate the Fairness Doctrine. If McConnell would succeed in blocking such a bill after a Democrat became President, that President could appoint a majority on the FCC which would reinstate it.

I am far more worried about a 40-page report by the Progressive Policy Institute, which is the left's attempt to imitate the Heritage Foundation. It claims that 91% of talk-radio is dominated by conservatives. It wants to attack ownership and shrink the renewal period for radio-station licenses from eight years to three. The MoveOn.Org types can go after every radio station license for alleged "unfairness." Never mind that the left tried four times to launch competition either by a program or a network and failed.

Can we help it if no one wants to listen to the left's constant pessimism and anger? Can we help it that without listeners, radio stations cannot obtain sponsors? Can we help it if Sean Hannity has more than 500 successful stations and the best the left has been able to get was 15 and it failed? Of course, there is Limbaugh with over 600 stations but there are also Mike Reagan, Bill Bennett, Janet Parshall, Hugh Hewitt, Michael Medved and so on. There also are local folks such as WMAL'S Chris Core, perhaps the most thoughtful local talk-show host in America, and Chris Plante, surely one of the most articulate of local hosts. Many cities with network talk-radio enjoy other such local hosts.

I hope the American public doesn't buy the so-called fairness argument. Talk-radio is the one way to deliver truth to the American public. Are mistakes made on occasion? Sure. I'll put talk-radio up against the old networks for accuracy and truth any day. If talk-radio as we know it dies this nation will suffer greatly. Back to the days when the big liberal networks filtered everything? God help us.