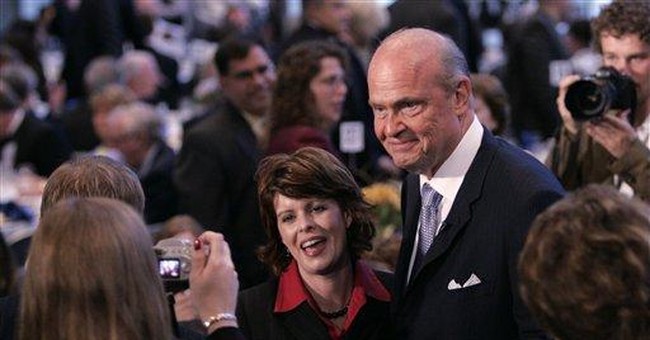 Ever since Ronald Reagan passed away, when even liberals seemed to appreciate him and his role in history, there has been a demand among rank-and-file conservatives that we find another Ronald Reagan. It goes back to the time when George H. W. Bush broke his pledge, “Read my lips: No new taxes.” It was more of a wish than a demand and confined more toward the politically conscious. What was a wish had become a demand since even liberal commentators found it in their hearts to say kind things about Reagan upon his death, leaving it to the far-left ideologues to trash him.

Ordinarily decent second-tier candidates such as former Governor Tommy Thompson of Wisconsin or Governor Mike Huckabee of Arkansas might have been able to surpass a weak first-tier, which has a lot of problems.

But that second-tier is not given a second look because these candidates aren’t Saint Ron. I was very much active politically during the entire Reagan Presidency. The effort to bring evangelical Christians and conservative Catholics worked, not only giving Reagan a landslide win but also producing the first Republican-controlled Senate in almost thirty years. While I recall the Reagan Presidency with great fondness I never got hooked on the notion that we must have a Reagan clone to save the nation. Reagan was perhaps guided by the Good Lord because he certainly was the right man for that era. With William J. Casey as Director of the Central Intelligence Agency, John Paul II as Pope and Margaret Thatcher as Prime Minister of Great Britain, Reagan and his allies helped the Soviet Union to implode. It has been a mere thirty years since the evil empire began to unravel. Yet adults born in or after 1987 have no clue how dangerous the Soviet Union was not just to this country but to the entire world.

We now face a different enemy. Whereas the Soviet Union was a conservative power in that it never invaded unless it were sure it could prevail, today we face a radical power that is more than willing to take chances even if anticipating temporary failure.

All of which brings me to Fred D. Thompson. The former Tennessee Senator appears soon to be about to declare for the Presidency. I have not seen such excitement since Ronald Reagan ran and won the Governorship of California in 1966. I was a reporter then and I covered the first National Governors Conference which Reagan attended as Governor. Hundreds, if not thousands, turned out merely to get a glance at Reagan because they were convinced that they were looking at a future President. They were correct. It is just that they had to wait twenty-four years.

Thompson is right upon the issues. He has a new wife and two babies. That fact seems to have focused his mind upon social issues. While in the Senate he generally voted right but we never were sure he knew why. I can say with certainty that he does now.

Critics of Thompson cite how Senator John H. Glenn, Jr. ran circles around Thompson during the hearing about money laundering to the Chinese during the Clinton Administration. True enough. But, like Reagan, I kept a daily journal. Whereas I only deserved mention twice in Reagan’s Journal, Reagan was mentioned many, many times in my journal. Among those references were disappointments when Reagan failed to take advantage of domestic-issue opportunities. So in that sense Saint Ron and Saint Fred were alike. Those who treat Reagan’s legacy as a myth, as if Nancy were writing the script, forget that he was a human being. For all the good he did for the country, he dropped the ball now and then. I know I must speak such things in a whisper, but it is certainly true that Thompson, like Reagan, didn’t always do what might have been done. Yes, in dealing with the Soviets he made few mistakes, in dealing with Tip O’Neill he made a number.

So what about Thompson? Is he the right man at the right moment? Can he rescue the Republican Party from the likes of the first- and second-tier candidates? Quite possibly. Can he defeat Senator Hillary Rodham Clinton or whoever the Democrats nominate? I have no idea.

I think Thompson would take the right position (from the standpoint of conservatives) on nearly every issue to confront us. Is he a tough campaigner who will do whatever is necessary to win? That I can’t say. I do recall in 1994 when he first ran for Senator. Thompson got in his pick-up truck and, dressed in jeans, crossed Tennessee to the point that before Election Day we were sure he would be the one certain victory. He defeated Representative James (Jim) Cooper, 61%-39%. He did then, and again in 1996 when he ran for a full term, what he had to do to win. Will he do the same when we are looking at the entire USA? I have no idea but if Tennessee is any example perhaps he should not be underestimated. Now if the Democratic nominee is Hillary (and I still believe that is likely) will he campaign below the belt as the Clintons have been known to do? Absolutely not. I believe Thompson believes that if you have to run a dirty campaign to win he would not want any part of it.

Can he save us from the war in Iraq? How about the war on terror? He is not likely to want to pull out of Iraq, giving the enemy due warning. Does that help or hurt? That probably depends on how things have gone with the war almost a year and a half from now. If we are losing then I can’t tell you what Thompson would do.

As to the war on terror, clearly Thompson understands the nature of the enemy. I don’t believe Thompson would cut the enemy any slack. Does that help or hurt? I believe it helps but we’ll see what kind of mood the voting public is in at that time.

Is Fred Thompson the second coming of Ronald Reagan? Not exactly. Is he, like Reagan, the right man for this desperate hour? That depends upon God’s Providence. If we pray hard God will answer that last question. Right now without announcing formally, Thompson is doing well in the polls. Will his standing go up or down when he becomes a real candidate? I can only guess. I think his standing will go up. In that case we could have a very lively two-man race in November of ‘08. On the other hand if New York City Mayor Michael Bloomberg runs and spends one billion dollars of his own money, what then? All I can suggest is to pray hard.