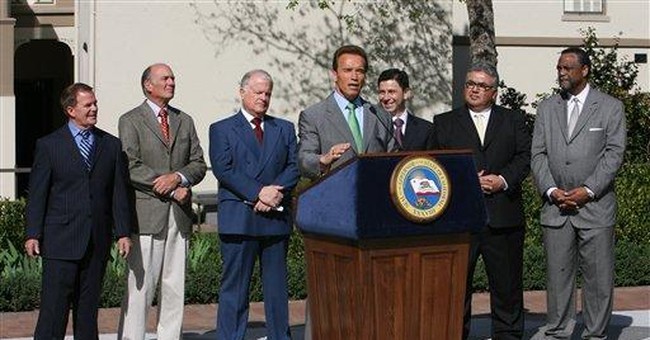 California did it. Governor Arnold "The Terminator" Schwarzenegger signed into law a measure passed by the ultra-liberal California Legislature which moves the Presidential primary to February 5, 2008. Many other States, including New York and Texas, may do so. New Hampshire, the nation's first primary election, is forced now to move its date up a bit so that it retains the status as the kingmaker of American politics. Depending how the New Hampshire Legislature legislates, the Iowa Caucuses may be moved up even earlier. Next thing we know we will all be casting our ballots on the way to church on Christmas Eve or to our synagogue on the way to celebrate the Festival of Lights.

If this weren't so serious it would be humorous.

At the beginning of the 20th Century primaries were unknown. Each State selected its delegates to the national conventions by holding a caucus of some sort. I don't mean anything like the Iowa Caucuses, which now attract well over 100,000 participants. No, these caucuses were relatively small. At most a few hundred of the party faithful gathered together for the purpose of sending a select few to the national gathering, which was much larger and often in a distant city. It was about these caucuses that the term "smoke-filled room" was born. In a few States, just a handful of people in a room, where cigars and brandy were abundant, sat down to play cards and to figure out who the next nominee of their party would be.

Then along came Governor Robert M. LaFollette (D-WI,) who initiated the primary system as a means to select delegates to the national conventions.

LaFollette was one of the founders of the Progressive Party and the primary was one of his many reforms, designed to put more power in the hands of the people, thus lessening the power of the smoked-filled room. A few States adopted the Progressive Party reforms but most continued to select their delegates to a national convention by a caucus of some sort. It wasn't until the latter half of the 20th Century that the majority of States adopted the primary system. Now only a handful of States still select delegates by convention.

The primary system is a good one provided that it is stretched over several months. From the Iowa Caucuses in January to the California Primary in June potential nominees could be vetted by the electorate. It was a time for practice, if you will, for the major national election in November.

The Governor and the Legislature in California got all hot and bothered to move their primary to February 5, 2008 because it had been a long time since California had been the major factor in a race for the Presidency. To be precise, it was 1964 and Senator Barry M. Goldwater won a close primary election over New York Governor Nelson A. Rockefeller. That was the last time California determined who the nominee of either party would be.

The move to February 5 would not be so pernicious if California alone were doing so. But most of the large States are accelerating their primaries as well. So we will have a super-duper primary and, bang, the nominee will have been chosen right then and there. Whom does super-duper primary help? In the case of the GOP it helps Rudolph W. (Rudy) Giuliani, assuming he can keep the poll numbers he now has. Rudy is the big-money candidate. Senator Sam Brownback (R-KS), Senator Charles T. (Chuck) Hagel (R-NE), Governor Mike Huckabee (R-AK), Congressmen Duncan Hunter (R-CA), Ron Paul (R-TX) and Thomas G. (Tom )Tancredo (R-CO) will have absolutely no chance under this system. On the Democratic side, Senator Barack Obama (D-IL), Governor Bill Richardson (D-NM), Senators Christopher J. Dodd (D-CT) and Joseph P. Biden, Jr. (D-DE) and former Senator John Edwards (D-NC) also will be relegated to has-beens under this new system because Senator Hillary Rodham Clinton (D-NY) has the money. In fact, it is doubtful that Governor Ronald W. Reagan (R-CA) could have come back from his earlier defeats, as he did in 1976 in North Carolina. He would require a huge sum of money to win on this super-duper primary system. And since Reagan was defeated in New Hampshire by incumbent President Gerald R. Ford (R-MI), he would not have been able to raise in a few days the huge amount of money required of a defeated candidate.

I always have favored a series of regional primaries spread over six months. Each region of the country would hold a primary on a different day, a month apart from another region. That would give candidates from all over the nation an opportunity to be nominated.

But this system says that our Presidential candidates must be rich and must have money to burn all during the year before that February doomsday. It is a distortion of our political system.

If we had a series of regional primaries it could take until the last primary for a candidate to be nominated. Incumbent Presidents would win by default. It is the challengers that concern me. This is the first time in more than half a century that there is no clear heir apparent in either party. But if this goes through it will be Hillary v. Rudy. And that will produce a massive walk-out from the Republican Party. Many are in that party because of pro-life and pro-family concerns. They have given up on the Democratic Party since 1980. If the Republicans are foolish enough to nominate a candidate who favors abortion rights and rights for homosexuals and so on the GOP will be left with only bitter partisans. All of those grassroots people who joined the Republicans because its candidates protected life will find themselves without a party. Even though it is terribly hard to start a new party, because the rules are stacked against you, it would be done in these circumstances. Without all of the pro-life and pro-family people voting Republican, Hillary would win.

Without intending to be sacrilegious, one is tempted to use the words of Jesus Christ from the Cross: "Father, forgive them for they know not what they do."